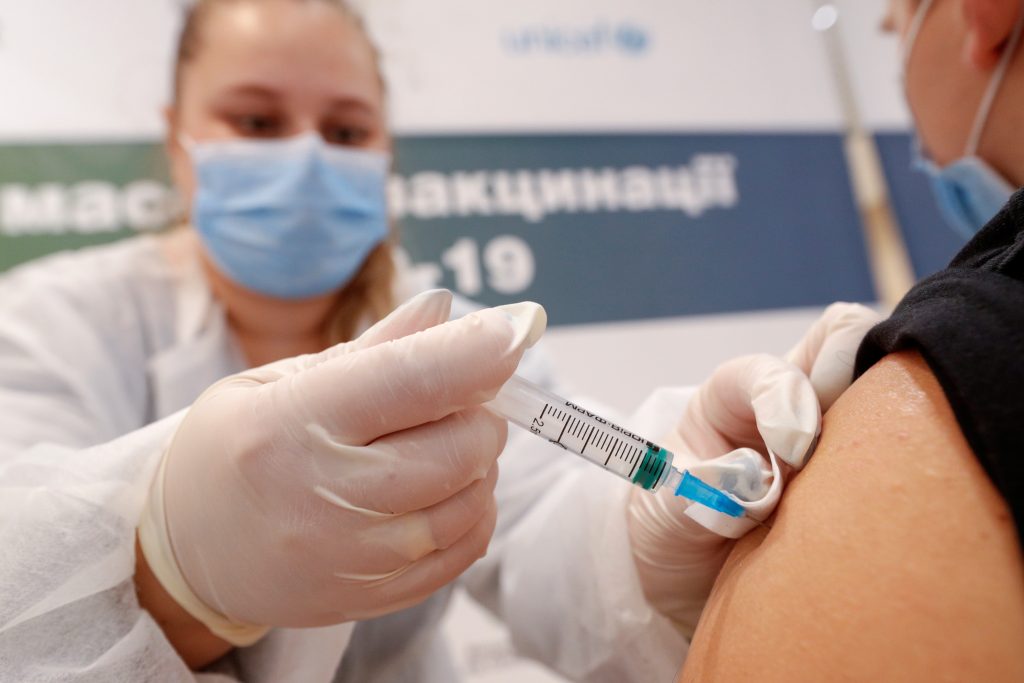 In recent months, Ukraine has experienced some of the world’s highest infection and death rates from the ongoing Covid-19 pandemic. Despite this rapidly deteriorating healthcare situation, Ukraine also has one of the lowest vaccination rates in Europe with only around 18% of the population fully vaccinated.

A range of different Covid vaccines are currently available in Ukraine, but efforts to vaccinate the country have run into resistance from a strong anti-vaccination movement. This anti-vaccination sentiment reflects traditional Ukrainian distrust of authority rooted in decades of negative experience during the Soviet era.

Alarmingly, the anti-vaccine mood is also being actively fueled by disinformation originating in Russia. The Ukrainian Security Service recently identified and shut down 5,000 fake accounts linked to Russia that were being used to spread anti-vaccine conspiracy theories among Ukrainian Facebook users. This Russian connection has led many to speculate that anti-vaccination disinformation is now part of Moscow’s ongoing hybrid war against Ukraine.

As the Ukrainian government introduces tighter measures to combat the spread of Covid and restricts access for those who have yet to be vaccinated, a thriving black market in fake Covid vaccination certificates has emerged. With an average price of just USD 75, these falsified documents have become so popular that the trend is attracting the attention of leading international media outlets such as the New York Times.

Ukrainian officials now acknowledge that the spread of fake Covid documents in the country could easily lead to international travel restrictions being imposed on all Ukrainian citizens. With this in mind, the Ukrainian parliament backed the first reading of a new bill on November 2 that will introduce criminal responsibility for the production and distribution of fake vaccination certificates, with penalties set to include dramatically increased fines and the possibility of imprisonment.

The bill has been categorized as urgent and is expected to move rapidly to a second reading within two weeks. Under the proposed new regulations, the fine for anyone caught with a fake vaccination certificate will rise from the present figure of around USD 35 to between USD 650-1300, which is significantly more than the current average Ukrainian monthly salary of USD 530. In extreme cases, those found guilty could also face up to two years in jail.

The envisaged penalties for doctors caught issuing fake vaccination certificates are more severe and include possible prison terms along with fines of USD 1300-2600. Significantly, doctors caught supplying fake documents to the black market will also be deprived of the right to practice medicine for between one and three years. At present, Ukrainian doctors face a possible USD 130 fine, which could theoretically be covered by issuing a few more fake certificates.

Under the proposed new legislation, the harshest penalties will be reserved for those involved in the manufacture and marketing of fake vaccination certificates, with fines of USD 3200-6500 and up to three years imprisonment. These tough measures are designed to target the unethical entrepreneurs who have sought to exploit the pandemic by producing thousands of fake certificates.

Ukraine is not alone in its struggle against a flourishing Covid vaccination certificate black market. Similar moves to tighten criminal responsibility have been introduced elsewhere in Europe over the past year as the vaccination drive has gained ground. Measures adopted across the European Union include steep fines and prison terms similar to those currently being considered in Ukraine.

Much will depend on the robustness of implementation. Corruption has been an everyday feature of the Ukrainian healthcare system for many years, with patients routinely securing all manner of fake documents from doctors. Such practices now threaten to undermine the country’s efforts to contain Covid, while also posing a risk to the international mobility of Ukrainian citizens.

In theory, high fines and possible prison sentences will deter doctors and members of the public from engaging in the black market for fake vaccination certificates. However, the role of law enforcement and the Ukrainian court system will be crucial in terms of actually imposing these penalties. Many Ukrainians will initially assume that it will be possible to bribe their way out of trouble, as has often been the case in the past.

Judicial reform is currently recognized as Ukraine’s top priority, but there has yet to be significant progress towards a legal environment where all are equal before the courts. This is likely to hinder efforts to clamp down on the Covid document black market and should further underline the urgency of reforming the Ukrainian justice system.

Oleksandra Ustinova is a Ukrainian MP in the Justice caucus of the Holos faction and a member of the parliamentary law enforcement committee.

Image: A man receives a vaccine against COVID-19 in Kyiv. October 27, 2021. (REUTERS/Valentyn Ogirenko)