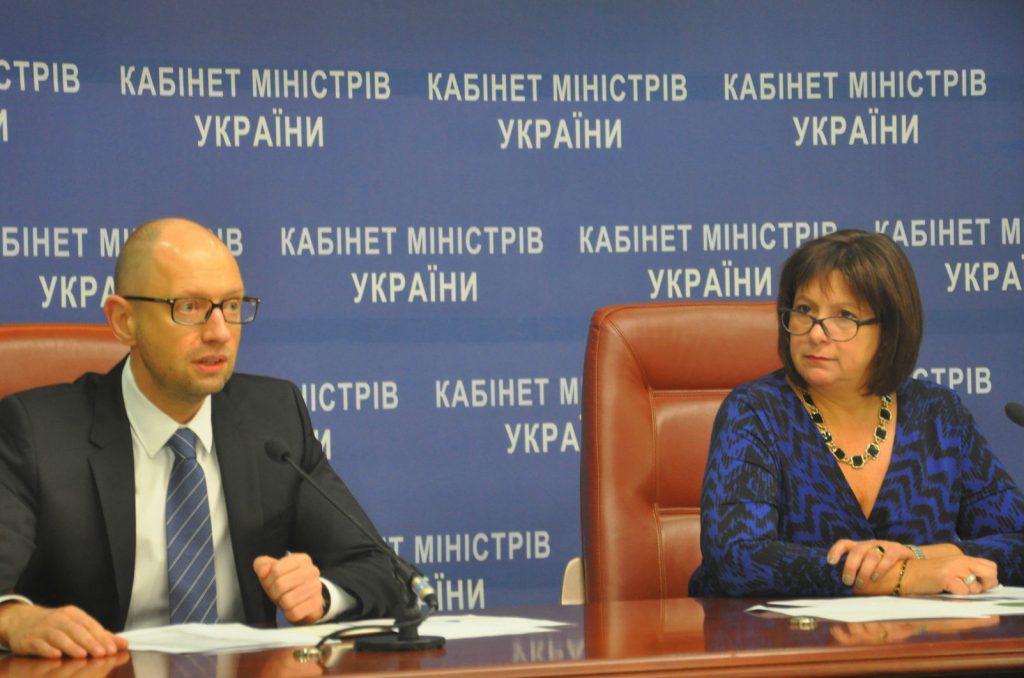 On December 20, Ukraine is supposed to pay Russia $3 billion in return for a Eurobond that Russian President Vladimir Putin issued in December 2013. Ukraine has no reason to pay.

In February 2014, the Kremlin launched military aggression against Ukraine, first annexing Crimea and later pursuing military subversion in southern and eastern Ukraine. For more than a year, Russian-commanded troops with a mixture of volunteers and regular Russian soldiers have occupied 3 percent of Ukraine’s easternmost territories.

Moscow’s war has caused major damage to Ukraine. Russia has not only usurped the territory of Crimea but also many enterprises, goods in storage, cash, and other bank assets. In eastern Ukraine, Russian troops have devastated buildings, factories, and bridges. The war has cost Ukraine at least 7 percent of GDP in lost production, and foreign investors have been scared off. Russia has also pursued a trade war against Ukraine, eliminating 18 percent of the country’s prior exports. Ukraine has no reason to pay such an aggressor; in fact, Russia ought to pay reparations to Ukraine.

Putin negotiated this deal personally with former President Viktor Yanukovych to provide him with a lifeline. It was never meant to benefit the Ukrainian nation.

Additionally, the Kremlin intentionally caused confusion in its formalization of these bonds. Russia issued them as a Eurobonds in Ireland in accordance with British law, making them a tradable private debt. But Moscow financed the loan from its National Wealth Fund, a sovereign wealth fund, and claims it is a sovereign debt. The Kremlin rigged a legal trap for Ukraine.

Georgetown University Professor Anna Gelpern has argued that Ukraine should not pay this debt because it amounts to “odious debt.” She has concluded: “The United Kingdom should make the bonds unenforceable under English law.”

The Ukrainian government has agreed to debt restructuring with the bond’s private holders, which has won approval by both the Ukrainian parliament and three-quarters of the private bondholders. This deal includes a nominal cut of the private debt (which is $18 billion) by 20 percent, and a postponement of debt repayments for four years. There are no private holdouts who do not accept these conditions. On October 29, the deal was finalized with the exchange of the old Eurobonds for new ones.

Ukraine offered the same restructuring conditions to Russia for its bonds, but Russian Minister of Finance Anton Siluanov refused to accept these conditions and demands payment in full on December 20. Putin has repeatedly brought up this topic himself. On October 13, he said, “But they need to return our money. And why doesn’t the IMF [International Monetary Fund] want to add those three billion to Ukraine so that it can pay us back? Why change its rules for a specific nation, essentially destroying the very system of rules for how the IMF functions?” Since Ukraine has already settled with the private bondholders, they do not mind if Ukraine does not pay Russia.

For Russia, whose current official international reserves are $375 billion, $3 billion is chump change, while such a payment could drive Ukraine into an acute currency crisis; its reserves are only $13 billion. Putin’s personal engagement enhances the impression that this is part of his warfare against Ukraine.

The only reason for Ukraine to pay is that it could run the risk of not receiving further funding from the IMF, which is vital for Ukraine’s financial sustenance. The IMF has an old practice of not lending to a country in arrears to a sovereign, but that practice should not be applied in this case. There was a dispute over whether these bonds were to be recognized as sovereign debt, but now the IMF is changing its rule so that it no longer matters whether it is a private or sovereign debt.

The IMF is about to change its practice of not lending into arrears. This is easily done because it is not incorporated into the IMF Articles of Agreement, that is, the IMF statutes. The IMF Executive Board can decide to change this policy with a simple board majority. The IMF has lent to Afghanistan, Georgia, and Iraq in the midst of war, and Russia has no veto right, holding only 2.39 percent of the votes in the IMF. When the IMF has lent to Georgia and Ukraine, the other members of its Executive Board have overruled Russia.

Ukrainian Minister of Finance Natalie Jaresko has repeatedly encouraged Russia to participate in the debt restructuring on the same conditions as private lenders, but Russia has rejected this option. Prime Minister Arseniy Yatsenyuk gave Russia until October 29 to accept the debt restructuring, but after that date, he offers Russia nothing but legal proceedings. In November, the IMF Executive Board is set to allow funding even when a country has not paid all of its debt obligations to sovereigns. Russia’s intransigence has convinced a board majority that the rules have to change fast. After that, Russia’s argument that the IMF should not pay Ukraine loses validity.

Ukraine will still have to fulfill standard IMF conditions; that is another matter altogether.

Image: Ukrainian Prime Minister Arseniy Yatsenyuk and Minister of Finance Natalie Jaresko speak at a press conference on debt restructuring in Kyiv on October 15. Credit: Ministry of Finance of Ukraine