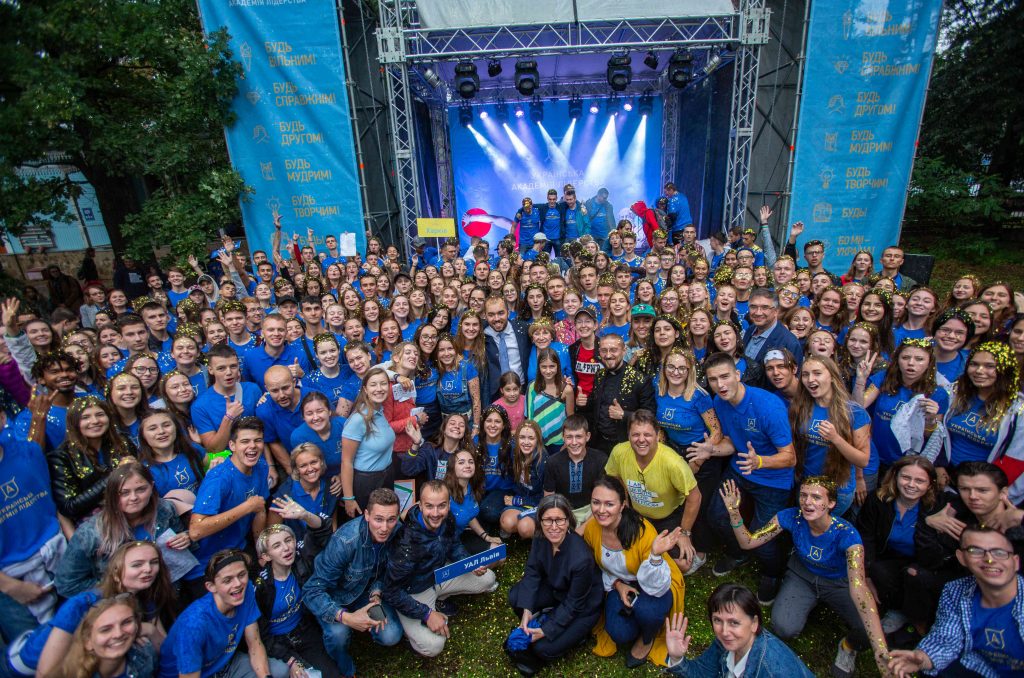 Two Saturdays ago was a gloomy day in Kyiv, but the weather didn’t manage to dampen the mood at the opening ceremony of the Ukrainian Leadership Academy, as its new students marked the beginning of its fourth year. ULA is a private, year-long residential-based initiative that prepares students who are between the ages of 16 to 20 for leadership positions by focusing on their intellectual, physical, and emotional growth. On September 8, 250 new students from every oblast in Ukraine and a few from overseas joined the ULA community.

ULA seeks to raise up a generation of talented young people who are already taking responsibility for their country in order to influence Ukraine’s reform process and politics. Its strategy is long-term.

Jaroslawa Johnson, CEO of the Western NIS Enterprise Fund which helped set up ULA, gave the opening remarks. She reminded the audience that when ULA started four years ago, it had only 39 students with one campus and the future of the project looked “quite uncertain.” One year later, ULA showed “astounding results” by opening four new branches in Lviv, Kharkiv, Mykolayiv, and Poltava, she said.

This year, ULA opened its sixth campus in Chernivtsi, a city in western Ukraine.

ULA alumnae Ivanna Hrebeniak is one of the promising ULA graduates who spoke at the opening ceremony. She is now a student at University of the Arts in London, and she spoke about discovering many unknown Ukrainian artists and poets. “We Ukrainians should be proud of our achievements and not fear showing them on the world stage,” she said.

The new crop of students too have ambitious dreams. Standing in the rain after the ceremony, laughing and taking pictures with her new classmates was Alyona Yurchenko from Vinnytsia in central Ukraine. “There are voids in our educational system and I can’t wait to finally have access to the finest educators. I truly believe I can become the greatest version of myself here.”

Deputy Minister of Education Pavlo Khobzei, also a speaker, agreed. “Whenever people ask us what these proposed changes [in education reform] entail, I explain to them that we want to start doing what the Ukrainian Leadership Academy is doing. If we model our schools off of the ULA framework, every student will be able to help Ukraine grow.”

This year, ULA sought out applications from the Ukrainian diaspora, and this year’s class includes Solomia Chaburska from Ottawa, Canada.

“I see myself as a Ukrainian, a Ukrainian Canadian, and it’s always been a mission of mine to come back here and give something from myself,” Chaburska said.

After the opening ceremony, students and staff boarded buses and headed to western Ukraine to begin a four day hike, climbing the two highest points in the Carpathians, Hoverla and Petros. “Before we sit down at our desks, we will start the year by overcoming a mutual journey, arduous but rewarding. From the top we will not only feel the strength of our hard work but look out onto the true beauty of our country,” ULA President Roman Tychkivskyy said.

ULA set another record this year. It received a recording-breaking number of applications. Seventeen students applied for every spot, which means the team was able to select the best and brightest from Ukraine, including Crimea and the Donbas. At the same time, many qualified young people cannot be included, and ULA is taking steps to remedy this problem. This fall, it launched a fundraising campaign in the hopes of making the program available to more students. By 2030, ULA aspires to have a campus in each of Ukraine’s 24 oblasts (roughly US states) with a community of 10,000 alumni.

After being at ULA, the school’s ethos, one of endless possibilities and pushing oneself to try for opportunities that may seem just beyond their reach, is already rubbing off on its new students.

Osman Dzelilov, a new student from Simferopol, Crimea, wants to study at Yale after ULA. “I want to receive the best higher education where I can then bring my experience from the US into Ukrainian companies which may be outdated. I want to bring the newest knowledge and the newest techniques to Ukraine. I truly believe that we students will change Ukraine, together we can achieve this.”

Marta Sydoryak is the Diaspora Partnership Manager at the Ukrainian Leadership Academy.

Image: On September 8, 250 new students from every oblast in Ukraine and a few from overseas celebrated their first day at the Ukrainian Leadership Academy. Credit: Courtesy