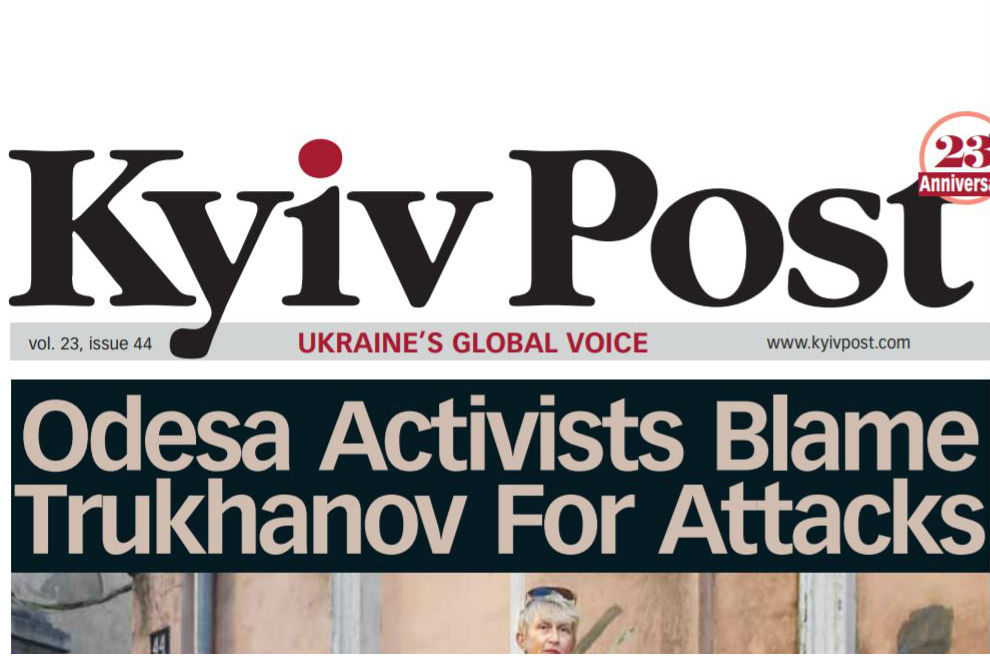 Media outlets everywhere face challenges ranging from shrinking advertising budgets to getting consumers to pay for content. In Ukraine, however, they may soon face a different kind of challenge.

A draft law currently being considered by Ukraine’s parliament would require all media published in other languages to produce an identical Ukrainian version both online and in print. Radio and TV are also required to be in Ukrainian, with programs in other languages being dubbed. If passed, the law would threaten the existence of several excellent publications and potentially alienate some segments of the population.

First, few media outlets in Ukraine are profitable and imposing this onerous requirement on them could force some to shut down. “There seems to be little recognition among the first draft’s proponents of market principles; publishers, no matter how rich, are not going to double their budgets to accommodate,” emphasized Brian Bonner, chief editor of the Kyiv Post.

Kyiv Post—Ukraine’s major English language newspaper—previously tried to produce a Ukrainian version but minimal demand combined with high costs quickly forced them to abandon the project. If the law passes, the Kyiv Post would simply shut down. While Bonner noted that a group of MPs have drafted an amendment to carve out an exception for English-language media outlets, “whether this will pass is unknown.”

However, it’s not just an issue of English. Some Russian language media outlets will be unable to meet the new requirements and could be forced to shut down as well. This is especially true for literary magazines and regional publications. Plenty of loyal and patriotic Ukrainians—particularly in the south and east—speak Russian, and this law might needlessly antagonize them by sending the message that Kyiv does not respect their linguistic or cultural preferences. While MPs can certainly legislate anything they want, including requirements to publish in Ukrainian, they can’t determine what language people prefer to receive their news and entertainment in, and when Russophone speakers see their favorite media outlets shutting down or scaling back, many may respond by turning to alternative news sources out of Russia.

Third, the bill does not in any way address the real problem in the media landscape, which is oligarchic control, particularly of television, which is the main source of news and information for 82 percent of Ukrainians. Indeed, the top five richest media owners in Ukraine are all oligarchs, including Rinat Akhmetov, Viktor Pinchuk, Ihor Kolomoyskiy, Dmytro Firtash, and President Petro Poroshenko. This produces a number of negative side effects, including the ability of oligarchs to use their media outlets as de-facto lobbying and propaganda tools to promote their own political and business agendas, while also limiting the emergence of fresh faces on the national political scene, since oligarch-controlled media outlets naturally prefer to limit the exposure of unpredictable new political entrants who may wish to challenge the status-quo preferred by the wealthy and their old guard political allies. And if the law passes and independent media outlets end up shutting down, oligarchic-control of the media will actually be reinforced since there will be fewer truly independent news sources available.

Fourth, much of the impetus behind this draft law are next year’s presidential and parliamentary elections, and the petty populist politics seemingly rising to the fore. Poroshenko’s campaign is a case in in point. Facing rock bottom polling numbers and few anti-corruption achievements he can legitimately claim to have initiated himself, Poroshenko has chosen to run for re-election under the slogan of “Language. Faith. Army,” leading one political analyst to argue that Poroshenko hopes to portray himself as the leading pro-Ukrainian candidate in the first round and then make it through to the second round to face a pro-Russian opponent he can easily defeat.

Finally, the bill takes the wrong approach by trying to base so much of Ukraine’s identity on the basis of the Ukrainian language, which implies that those who don’t speak Ukrainian as their first language are in some way not fully citizens in their own right. As Peter Dickinson, publisher of Business Ukraine magazine and a nonresident senior fellow at the Atlantic Council pointed out, “Ukraine is a very multi-ethnic and multicultural state, and its legislation should reflect that.” Indeed, at a time of war, politicians should be focusing on promoting civic virtues such as democracy, EU integration, the rule of law, and tolerance—things all citizens can theoretically identify with—as opposed to ill-conceived attempts to divide and segment the population for short-term electoral gain.

To be clear, there’s nothing inherently wrong with promoting Ukrainian language media; however, there are surely less punitive ways to do so.  Bonner, for example, suggests the government could invest in a first-class public TV station with high quality Ukrainian content or helping Ukrainian-language publishers with tax breaks or other incentives—a kind of “affirmative action” policy for the Ukrainian language. The ultimate goal though, argues Bonner, should be to create a neutral platform for languages and then let consumers decide. Bonner’s right, and over time, this type of non-coercive approach is far more likely to lead to the government’s desired outcome.

Image: Ukraine's draft language law would likely cause the Kyiv Post and others to close their doors. Courtesy screenshot.