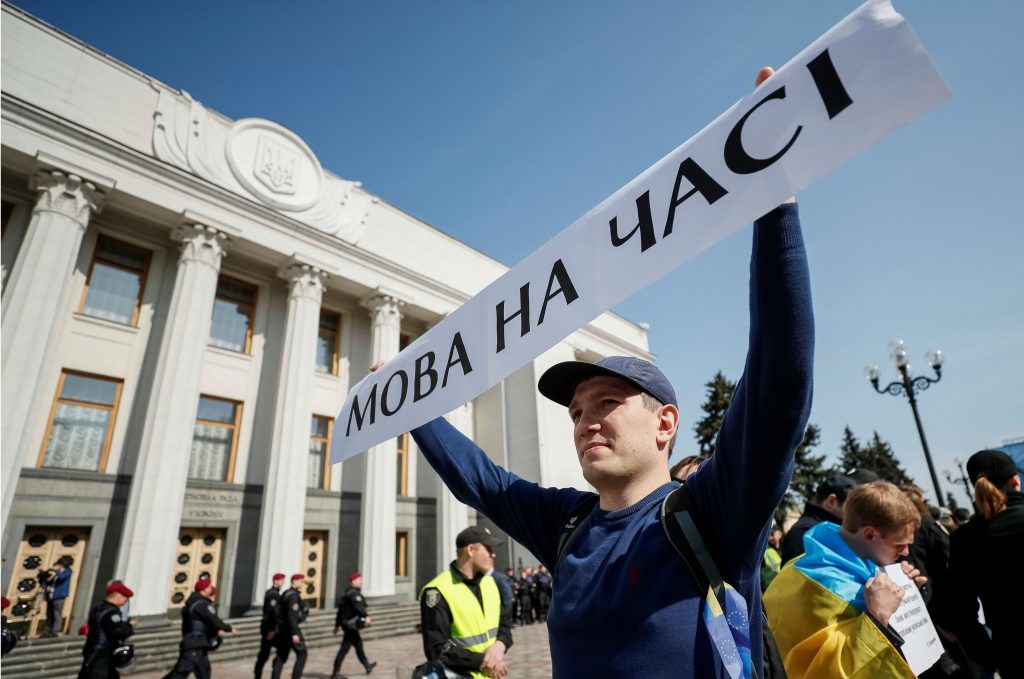 For centuries the Ukrainian language was relegated to the status of a “peasant language” by the foreign rulers of the lands that make up the country today and by foreign scholars in Europe and abroad who perpetuated this Russian imperial falsehood. More recently, after the disintegration of the Soviet Union, Ukraine inherited a Soviet political elite who spoke Russian, and to this day all of Ukraine’s oligarchs are Russian-speaking. This has buttressed the post-colonial dominance of the Russian language and culture in the public sphere and the subsequent ostracism of the Ukrainian language. The Ukrainian-speaking majority has been historically marginalized as peripheral, with inferior access to high culture, quality education, prestigious jobs, political office, and the creation of wealth primarily due to the bias of the established colonial practices that saw Ukrainian as “low” and “rural.”

That all changed on April 25, when the parliament adopted a new language law. The numerous reactions to it both domestically and abroad would have made a fascinating character study to catalogue the people and their reactions on the various television programs. On display was a broad swath of human emotions ranging from euphoria to lament. The intellectuals, as well as young people with university degrees who had spent time abroad, came across as extremely supportive and contented. The laborers and pensioners who had enjoyed limited opportunities for higher education and travel outside of the former Soviet Union were more dismissive. In further observation, several of the second category mentioned that their discomfort was due to limited knowledge of the language and not some sense of discrimination. Regret that there was too little interesting content in Ukrainian on TV was mentioned several times, a particular issue that should be, in theory, remedied by the new law.

In a form of Ukrainian exceptionalism, the long-derided Ukrainian “peasant language” has not only survived but has flourished and become the lingua franca and the way forward of progressive thinkers, writers, civic and religious leaders, intellectuals, and the majority of Ukrainians. Intentionally choosing to speak Ukrainian signals that a person wants to develop the country into a modern European nation based on values and the rule of law. For many, the Russian language is associated with a return back to a dark and gloomy totalitarian past. Unlike during the Czarist or Soviet times, this new language law does not attach any stigma to speaking another language; instead, it requires that Ukrainian be the language of first resort to balance out its significance among all of the languages spoken in Ukraine.

The role of the diaspora should not be ignored in this narrative. Ukrainians have much to be grateful for to their large and effective representative communities abroad, who have carried Ukraine in their soul to preserve its heritage, its multi-ethnic and religious culture, and its rich language and literature. Their patriotism and contribution to the development of Ukraine has never been limited by any geographical boundaries. That should be a lesson to all in Ukraine, that patriotism is not bound by borders or language, but rather by the closeness of those who love their country and who are willing to invest in its success.

Image: An activist attends a rally to demand lawmakers vote for a law that grants special status to the Ukrainian language and introduces mandatory language requirements for public sector workers, in front of the parliament building in Kyiv, Ukraine April 25, 2019. The banner reads "High time for the language." REUTERS/Gleb Garanich