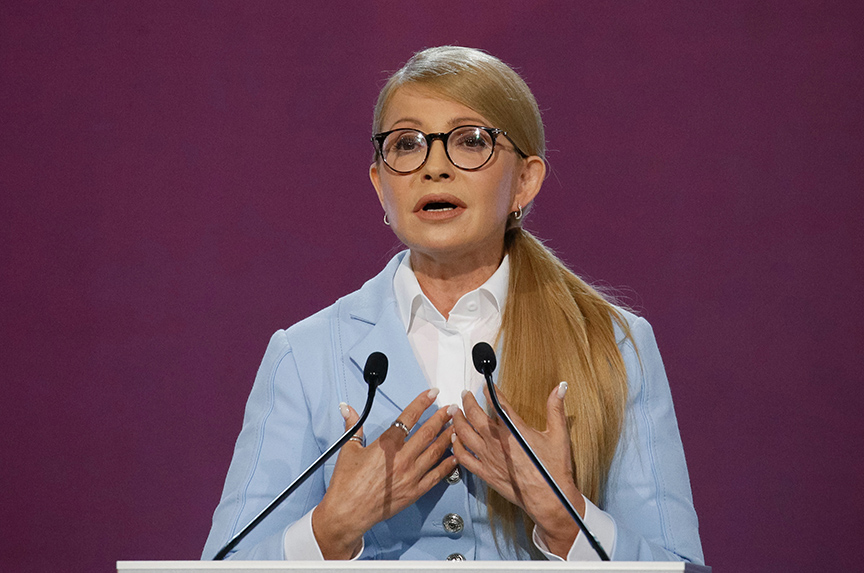 The hot summer of 2018 has been unusually calm in Ukraine, where in the absence of other news, a scandal or a crisis catches the media spotlight. This is a stark contrast to 2009, when the Ukrainian presidential campaign was in full swing, which on February 7, 2010, ended in victory for Viktor Yanukovych. In March 2019, exactly nine years later, Ukrainians will choose their sixth president.

Today, numerous billboards and TV ads remind us of the beginning of the election campaign, or to be more precise, of presidential candidate and former Prime Minister Yulia Tymoshenko. The word “new” is abundant in all of her advertising: “The New Deal,” “New People’s Constitution,” and even “New Peace Plan.” The word “new” seeks to evoke the most positive associations in voters and make them forget that she is far from a novice. Tymoshenko was first elected from the Kirovohrad district to the parliament in 1997 with a fantastic 92.3 percent of votes.

Tymoshenko’s idea to play on novelty is not bad, given that her main opponent in the 2014 elections was Petro Poroshenko, who won using the campaign slogan “Live in a new way!” In politics, Poroshenko is only one year younger than Tymoshenko; he first became a member of the Verkhovna Rada in 1998.

Tymoshenko’s main rival, President Poroshenko, is focused on fulfilling his obligations. He devoted most of the summer to foreign policy issues and to obtaining a Tomos from the Ecumenical Patriarchate of Constantinople to create the Ukrainian Autocephalous Orthodox Church. There are no signs of the launch of his election campaign, although it could happen as early as September. For now, the impression is that his campaign advisers are closely watching the race and waiting for the right moment.

The ratings show a narrow margin among leading candidates, and none of the leaders (Yulia Tymoshenko, Anatoliy Gritsenko, Yuriy Boyko, Volodymyr Zelenskiy, Petro Poroshenko, Oleh Lyashko, and Svyatoslav Varkarchuk) has 20 percent. With such an electoral menu, when the choice is limited to the best of the worst, a candidate who advances into the second round will take no more than 25 percent. This is a striking contrast to previous elections, when the two leaders of the race were clear from the outset.

No one wants to predict who will make the second round, although Tymoshenko looks likely. Her relatively strong stance at the start is provided by her loyal electorate and by the absence of other contenders. When the political seas are calm like this, the former prime minister’s ads are heard from every TV and YouTube playlist.

Nevertheless, the beginning of the political season is expected to be very hot, promising many scandals. The Ukrainian oligarchs haven’t wasted any time either. Several political alliances have already been formed and have been visible since the spring. According to trusted information, Tymoshenko has essentially secured support from one of the country’s largest businessmen and the owner of 1+1 TV channel, Ihor Kolomoisky. Drawing on the time-honored tradition of putting eggs in more than one basket, Kolomoisky will also support the unknown political party “Servant of the People.” The party has gained notice because its presidential candidate is likely to be the famous comedian, Volodymyr Zelenskiy, who has old business ties to Kolomoisky. Some see a worrying parallel between Zelenskiy’s unexpectedly high approval rating of 8.5 percent and the career of Giuseppe Piero “Beppe” Grillo, an Italian comedian and cofounder of the Five Star Movement.

In addition to Kolomoisky, Rinat Akhmetov has also placed his bets. He is expected to promote his old political protégé, the leader of the Radical Party, Oleh Lyashko. In the 2014 elections, Lyashko came in third, but it will be incredibly hard for him to replicate that success. The country’s subsequent political trajectory broke apart alliances within the Opposition Bloc; hence, Akhmetov decided not to back his old associate Yuriy Boyko, giving preference to another proven fighter, former Vice Prime Minister Oleksandr Vilkul.

Ukraine’s former Defense Minister, Anatoliy Gritsenko, has been mostly quiet; there is no information on whether he was able to secure financial support from the oligarchs. Nevertheless, the Verkhovna Rada has already established a special commission to investigate the activities of former defense ministers. Probing Gritsenko is clearly the objective. Ivan Vinnyk, an MP from Bloc of Petro Poroshenko fraction, is heading the commission. The results of this investigation, focusing on the defense ministry’s property sale amounts under Gritsenko, could greatly undermine the former defense minister.

Another unanswered question is the participation of Svyatoslav Vakarchuk, the lead singer of the Okean Elzy rock bank. According to the July Rating Group poll, he has a 6.6 percent approval rating. A rumor is still circulating that Vakarchuk may launch his presidential campaign on Ukraine’s Independence Day on August 24 during his concert at the NSC Olympiyskiy Stadium. This, however, looks too artificial to be true. If he runs, a large coalition of non-governmental organizations and young politicians will back him. The term homo novus (a new man) best applies to Vakarchuk. Romans used this title to name citizens who were elected as senators or consuls for the first time. However, even if he refuses to participate in the presidential race, his not-yet formed political party would have good chances in the October 2019 parliamentary elections.

If these new political forces want to win the presidential election, they would need to take a difficult and painful step—hold a primary and pick a candidate. For now, they have a low chance of being able to agree on a unified candidate. If they cannot agree, it would be nearly impossible for these new faces to weigh in on the battle of the old guard heavyweights in the second round.

Taras Berezovets is a cofounder of Ukrainian Institute for the Future and the TV host on Pryamyy channel. He tweets @TarasBerezovets. This article was translated from Russian to English by Vera Zimmerman.