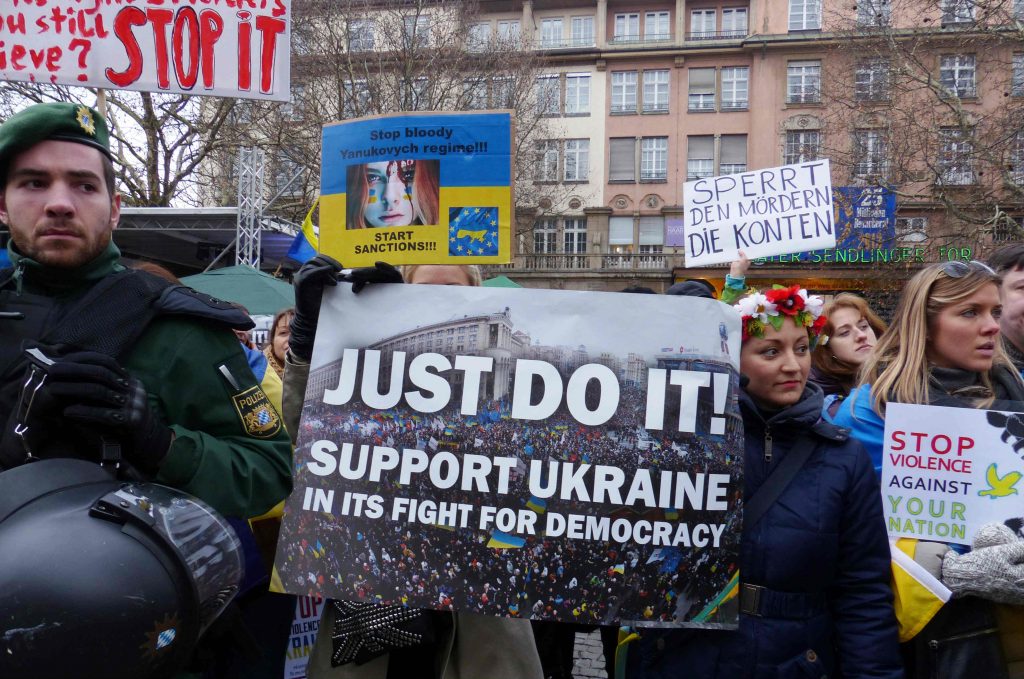 Ukraine has a problem with global public relations. Despite its fundamentally compelling narrative—a recent democracy defending itself against a much larger, authoritarian neighbor—the country’s efforts remain uncoordinated, unprofessional, and unfiltered. Even as the state relies on a worldwide diaspora in its struggle for survival, it shows few signs of effectively harnessing its expatriates and the sympathies of foreign audiences. Worst of all, it has not reached a consensus on what message it is trying to send to the wider world, largely abandoning the information space to its adversaries.

Many of the popular, disparate Ukrainian sources which actively disseminate information about the war in foreign languages are private undertakings, either the products of citizen journalism, like Euromaidan Press and InformNapalm, or commercial ventures, like Ukraine Today. By contrast, the Twitter feed of the much-derided Ukrainian Ministry of Information Policy, created to coordinate and improve the government’s messaging efforts, has less than fifteen hundred followers, is entirely in Ukrainian, and goes for days at a time without an update. Without a hint of irony, one of its latest tweets announced that the ministry’s experts had given a presentation on “how to change the world in 140 characters”—which is the maximum length of a Twitter message.

But perhaps a bottleneck in the translation of official pronouncements is a good thing since Ukraine is spared the embarrassment of a wider audience learning of stunningly ill-advised remarks by senior figures like Valentyn Nalyvaichenko, chief of the country’s intelligence service. In a recent interview with the Ukrainian newspaper Den’ (Day), Nalyvaichenko stated that his organization should imitate the conspiratorial practices of the OUN-UPA, the Ukrainian independence movement notorious for collaborating with the Nazis in the murder of Jews and Poles during World War II.

The state shows few signs of tapping the considerable resources of its expatriates. Across the street from the Metropolitan Museum of Art on Fifth Avenue in New York, there sits a massive mansion at what is arguably the most prestigious address on the most prestigious street in the most prestigious city in America. But with little to advertise its purpose beyond a modest box hanging on the ornate iron fence, the vast majority of passers-by likely have no idea that the building is a non-profit organization dedicated to promoting the art, music, and literature of Ukraine and the Ukrainian diaspora. Those curious about the conflict threatening Ukraine’s existence are unlikely to learn much more inside; a weekend visit in September 2014, as fighting raged in the Donbas, found it otherwise empty except for an art exhibit staffed by a single young volunteer.

In a sign of how profound the problems are, perhaps the simplest issue to resolve would be the organizational one. Each one of Ukraine’s citizen journalism initiatives is essentially fighting its own war; a single clearinghouse which would, for example, compile and translate the considerable amount of photographic, journalistic, and social media evidence of the Russian military presence in southeastern Ukraine is sorely needed. The money and resources of the Ministry of Information Policy might be better spent consolidating the efforts of these young and talented journalists than maintaining a Facebook page with less than eight hundred likes.

Likewise, no official body exists to coordinate the efforts of the large Ukrainian expatriate communities in the major cities of Europe and North America. What public demonstrations of support for the Ukrainian cause do occur are typically small, ad hoc affairs, rarely advertised beyond diaspora circles and mostly impenetrable to outsiders. With diplomatic representation in all the major capitals of the Western world, the Ukrainian government has a ready-made springboard to streamline the activities of expatriates and to mobilize non-Ukrainians who oppose Russian aggression. However, tasking a traditional apparatus like diplomacy with innovative public relations work would require a degree of imagination that Ukrainian officialdom has not yet demonstrated.

The single biggest obstacle to a sustained public relations campaign is one that neither money nor talent alone can overcome: the lack of a clear and unified message about what Ukraine is fighting for. Resistance to Russian aggression and the pursuit of a democratic European orientation are the government’s stated aims, but the latest parliamentary dust-up over proposed laws banning Soviet symbols and honoring “participants in the struggle for independence,” including the OUN-UPA, is a reminder that part of Ukraine’s leadership and its supporters are busy tilting at populist windmills in an hour of grave danger. Sympathetic observers will rightly point out that far-right causes only have miniscule electoral support in Ukraine, but public relations is fought with images, not percentages. Until Ukraine can learn to shelve the unpalatable elements of its nationalist heritage, its messaging will remain muddled, incoherent, and vulnerable to criticism.

Andrew Kornbluth is a doctoral student in the Department of History at the University of California, Berkeley.

Image: No official body exists to coordinate the efforts of the large Ukrainian expatriate communities in the major cities of Europe and North America. What public demonstrations of support for the Ukrainian cause do occur are typically small, ad hoc affairs, rarely advertised beyond diaspora circles and mostly impenetrable to outsiders. (Credit: blu-news.org via Wikimedia Commons)