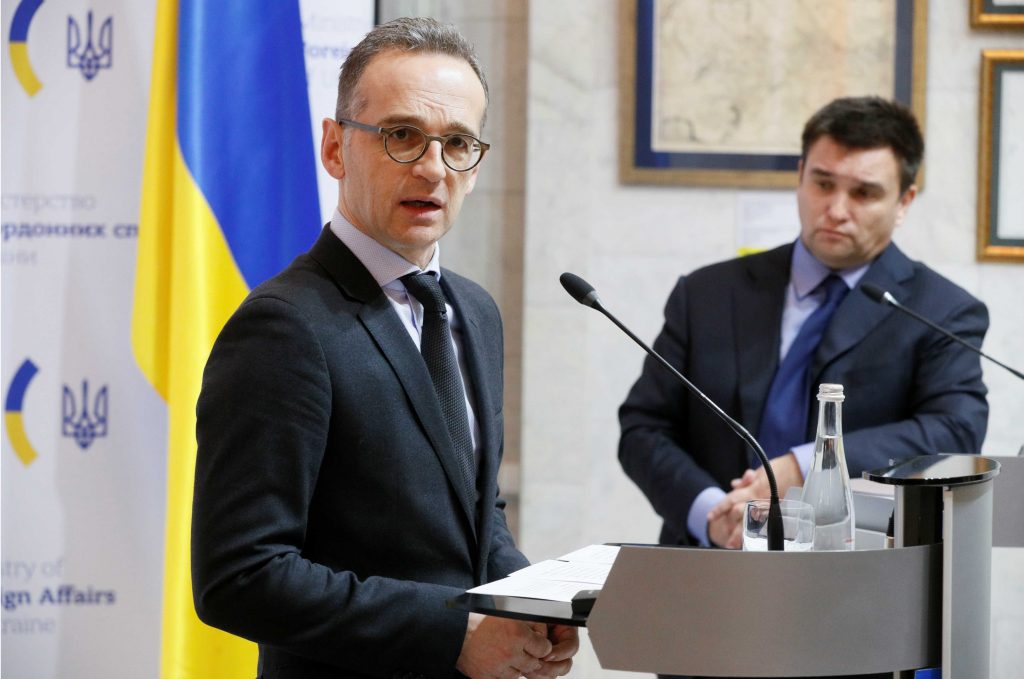 Russia’s war against Ukraine is about to enter its sixth year, but many remain in denial over the true nature of the conflict. There is still widespread international reluctance to acknowledge the global significance of Vladimir Putin’s invasion, leading to a preference for the kind of euphemistic language that blurs the lines between victim and aggressor. This ostrich-like approach to the realities of the new Russian imperialism was on display during German Foreign Minister Heiko Maas’s recent visit to Kyiv, where he called on “all sides to contribute to de-escalation.”

Maas was apparently untroubled by the absurdity of urging Ukraine to de-escalate its own invasion and dismemberment. Indeed, it says much about the current climate that one of Europe’s top diplomats felt comfortable coming to the capital of a country fighting for its life and delivering a lecture on the need for moderation.

Nor is he alone. Ever since the onset of Russian aggression in spring 2014, international appeals for both sides to de-escalate have become a depressingly regular feature of the dialogue surrounding the conflict, serving as the diplomatic equivalent of victim blaming.

Russia must take much of the credit for this state of affairs. While few believe the Kremlin’s ongoing denials of involvement in Ukraine, the plausible deniability underpinning Putin’s brand of hybrid warfare has created just enough ambiguity to muddy the waters. What should be a cut and dried case of the first European invasion since the Second World War has instead drifted out of the headlines as an unwelcome but opaque issue that defies coherence. One suspects that this has not been entirely unwelcome in some quarters, particularly as it has relieved the West of the obligation to mount a more appropriately resolute response. In that sense, Russia is far from the only beneficiary of Putin’s fig leaf referendums and proxy armies.

Pretending the Russian invasion of Ukraine is a mere border skirmish will not make it go away. On the contrary, the Kremlin may be settling in for a long campaign. Work has finished on a number of new Russian army bases dotted along the Ukrainian border, while the redirection of Russian railway lines and other changes to army logistics consistently point to preparations for future land operations inside Ukraine. In recent months, Moscow has also tightened its grip on the Azov Sea and Ukraine’s southeastern seaboard, while at the same time pushing to increase the encirclement of the country from the north through a greatly enhanced military presence in Belarus. The slow but steady strangulation of Ukraine is taking place in plain sight.

Why is this not producing an urgent international response? The West’s refusal to recognize the scale of Russian imperial ambitions in Ukraine is not exclusively the product of hybrid war trickery and willful geopolitical blindness. It is also a matter of ignorance and misconceptions. The depth of Russian resentment over the country’s diminished post-Soviet status is simply incomprehensible to modern Western audiences who are more inclined to assume that Russians broadly share their values. Most Westerners have grown up entirely comfortable with the idea of retreat from empire, regarding it as an inevitable process. Few can begin to fathom that today’s Russians might actually be prepared to sacrifice their living standards, never mind their lives, in pursuit of archaic colonial conquests.

Outside understanding of Ukraine is even more limited. Ever since 1991, the West has struggled to grasp the enormous geopolitical implications of an independent Ukraine and has typically treated the country as an uninvited guest. On the relatively few occasions when they have deigned to pay attention, most Westerners have tended to view the country through the distorting and outdated prism of Russian narratives. This has fuelled a culture of excessive caution and prevented the kind of engagement that other newly independent Eastern Bloc nations in Central Europe and the Baltics have enjoyed. It is striking to note that even now, after two pro-democracy revolutions and a five-year armed conflict in support of Western integration, Ukraine remains firmly trapped in post-Soviet no man’s land with membership roadmaps for the European Union and NATO both conspicuously absent.

Calling on Ukraine to compromise with the Russian invader is not only morally reprehensible. It is also strategically foolish. The West already finds itself locked in a new Cold War with Moscow that has its roots firmly planted in Ukraine. Until the war in Ukraine ends, this confrontation will continue to escalate. Since it first attacked Ukraine, Russia has expanded its hybrid hostilities on a dizzying array of fronts, ranging from Syria to the 2016 US presidential election. Africa is now emerging as a new Cold War theater, while Kremlin efforts to undermine the democratic process throughout the West are showing no signs of slowing. Nevertheless, all roads still lead to Kyiv.

Putin’s hybrid war in Ukraine remains at the epicenter of the global conflict and the struggle is now entering what could be a decisive period. Ukraine will hold presidential and parliamentary elections in 2019, with both votes likely to cement the country’s historic pivot toward Euro-Atlantic integration. The election of another pro-Western president and parliament would be a devastating blow for Russian imperial ambitions and one that could persuade the Kremlin to consider increasingly drastic measures. Faced with the prospect of demotion, from hero of Crimea to the man who lost Ukraine, Putin will be acutely aware that his regime may not survive such a debacle.

This makes it essential that the international community sends the right signals to the Kremlin now. In the coming months, any talk of both sides de-escalating needs to be replaced by clear and unambiguous support for Ukraine in its defense against Russian aggression. Moscow should be made painfully aware of the consequences should it seek to test Western resolve and Ukrainian resilience any further. The new Cold War is the direct result of Western efforts since 2014 to appease Moscow and avoid the uncomfortable reality of a revanchist Russia. This brand of wishful thinking must give way to the kind of clarity that won the first Cold War. Ultimately, there can be no equivalence between Ukrainian resistance and Russian aggression. If Russia stops fighting, there will be no war. If Ukraine stops fighting, there will be no Ukraine.