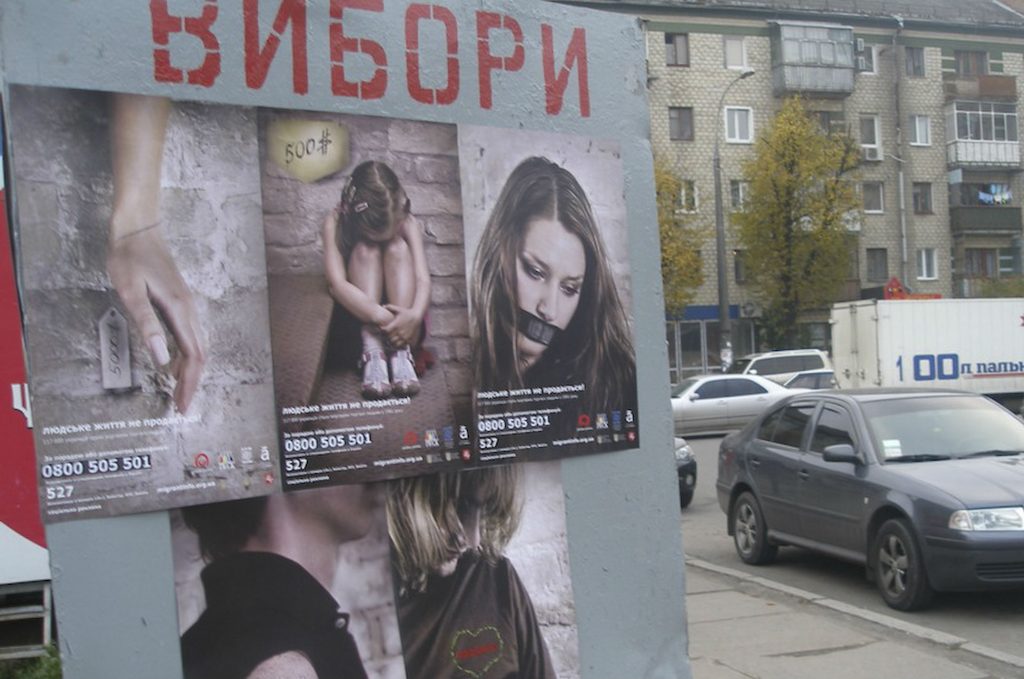 "Human life is not for sale” reads a poster that’s part of a campaign against human trafficking in Kyiv. Credit: Embassy of Poland in Kyiv

Ukraine remains one of Europe’s most notorious sources of human trafficking. Since 1991, over 160,000 men, women, and children have been exploited for labor, sex, forced begging, and organ removal, according to a mid-2015 report from the International Organization for Migration (IOM).

Ukraine’s Ministry of Social Policy, with recommendations from domestic and international nongovernmental organizations, is currently in the final stages of updating the country’s five-year action plan on combating human trafficking.

However, recent challenges—like Russia’s continued aggression in eastern Ukraine and the country’s 1.5 million internally displaced persons (IDPs)—have diverted the government’s attention and resources from meaningful anti-trafficking collaboration. The result has been an extreme over-reliance on nongovernmental organizations (NGOs) to raise awareness, assist victims of trafficking, and promote legislative reform to comply with international standards.

“Since the security situation started in the east of Ukraine, other things were blocked. All money went to subsidies, to the military, to IDPs,” says Olga Streltsova, the IOM’s advisor to the Ministry of Social Policy, the main body in charge of Ukraine’s anti-trafficking program.

The predicted budget for this next action plan has been slashed by 30 percent relative to the previous plan, which covered 2013–2015. Outside contributors, such as human rights organizations and foreign governments, will continue to supply the vast majority of funds to the program. These donors will contribute the equivalent of $1.47 million through 2020, or over 92 percent of the entire bill. The other 8 percent will be divided almost equally between local governments and the central government. Funding from the latter will not kick in until 2017.

While the government of Ukraine has consistently pledged reform to meet international obligations—for example, as a signatory of the UN’s Protocol to Prevent, Suppress and Punish Trafficking in Persons, Especially Women and Children—it has failed to adequately support anti-trafficking organizations that do the bulk of the work.

“Our government so far has not given civil society a defined role in the national referral mechanism,” says Hanna Antonova, a counter-trafficking coordinator at the IOM. The referral mechanism is the process by which law enforcement refers alleged victims of trafficking to anti-trafficking organizations to receive psychological, legal, and social support.

For the past four years, the number of trafficking victims referred to the IOM for assistance by Ukrainian law enforcement agencies has decreased by roughly half annually. In 2012, 2013, 2014, and 2015 there were 232, 105, 52, and 27 victims referred, respectively. These numbers are dramatically different from those of the IOM; the average number of victims identified annually by the IOM has remained close to one thousand.

Moreover, President Petro Poroshenko’s effort to push through legislation that would decentralize authority and empower Ukraine’s regions threatens to reverse progress in efforts to combat trafficking. If passed, NGOs may have to collaborate with officials from over twenty different oblasts. Each regional administration would decide how to prioritize anti-trafficking prevention efforts and assistance to victims, if at all, throwing nationwide coordination efforts into disarray.

“We don’t know what decentralization will look like,” says Antonova. “If the local administration does not believe that trafficking is a problem for this specific region, then they are not going to allocate any funding, or they will allocate so little funding that it is not going to make any difference.”

International bodies such as the US Department of State and the Council of Europe’s Group of Experts on Action against Trafficking in Human Beings (GRETA) have also criticized Ukraine’s government for not devoting enough attention to the issue.

For instance, for the third straight year, Ukraine has been placed on the State Department’s Tier 2 Watch List, avoiding an otherwise mandatory downgrade to Tier 3 (the worst rank) simply because it has a written anti-trafficking action plan. The State Department notes with concern the decreasing number of prosecutions of traffickers, as well as “poor coordination at the national level” between the fifteen ministries responsible for anti-trafficking work.

Despite the government’s shortcomings, some positive steps have been taken. The Ministry of Social Policy plans to re-adjourn the interdepartmental council in early 2016, and has sent letters to NGOs in the anti-trafficking coalition requesting that they nominate representatives to the council. And throughout the past few years, the ministry has implemented campaigns to raise awareness about human trafficking through television and radio broadcasting, and the publishing and distribution of books and pamphlets.

Yet more needs to be done, especially since the war in the east has created a large population of individuals prone to exploitation.

“We have a proverb,” warns La Strada-Ukraine’s Taturevych. Translated from Russian, it states: “Sink or swim; if you are drowning, you are on your own.” Currently, only NGOs—and not the Ukrainian government—are struggling to keep those vulnerable to trafficking afloat.

Officials from Ukraine’s Ministry of Social Policy did not respond to interview requests.

Luke A. Drabyn is a Fulbright Scholar working with human rights organizations in Kyiv.