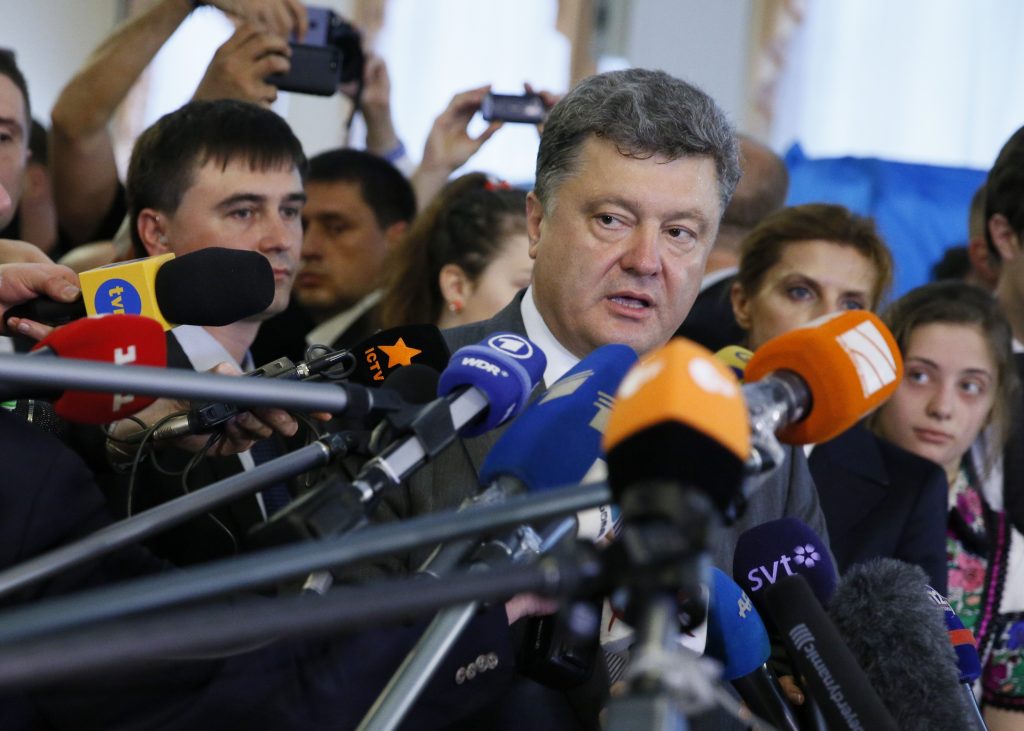 Poroshenko’s Team Creates a Government Agency in 60 Hours; Critics Ask if This Is the Way to Counter Kremlin Propaganda

President Petro Poroshenko’s government created a Ministry of Information Policy last week in sixty hours from first proposal to parliamentary approval—and did so over the objections of pro-reform legislators, journalists, and democracy activists.

With Russia modeling state domination of its media next door, and Ukraine’s broadcast media already dominated by the country’s billionaire oligarchs, Ukrainian journalists and civil society groups such as Chesno (“Honestly”) immediately criticized the new ministry as a risk of state censorship. They protested outside parliament, invoking images of the Ministry of Truth in George Orwell’s dystopian novel 1984. And with the government slashing its budget amid a financial crisis, critics wondered why a new government agency should be formed—especially one with an unclear mission and no consensus of support among the public or in parliament.

Poroshenko and Prime Minister Arseniy Yatsenyuk say the improved democracy of Ukrainian governance—reflected in their commitments to be transparent and inclusive—would prevent abuse of the new ministry. But the circumstances of its birth were far from open and transparent.

Poroshenko’s circle announced the idea at 7:15 a.m. on November 30 in four paragraphs of a Facebook post by Anton Herashchenko, an Interior Minister adviser. “There’s an idea to create a Ministry of Information Policy within the Cabinet of Ministers,” Herashchenko wrote. “Its main purpose will be to safeguard Ukraine’s information space from Russian propaganda and develop counterpropaganda in Russia and in the occupied Donbas and Crimea.” And he proposed as minister Yuriy Stets, a close Poroshenko aide who was a senior manager at the television network, Channel Five, owned by the president.

The next day, the parliamentary caucus of Poroshenko’s party—almost 150 legislators—debated the idea and decided that too many questions were unanswered, said Serhiy Leshchenko, an editor and new member of bloc after October’s election. “Our caucus agreed to postpone voting on this issue until a public debate had been conducted. Even Yuriy Stets, the designated minister, agreed to these arguments,” Leshchenko wrote in a blog post.

But then Poroshenko showed up to say that “this is my political demand”—and the lawmakers meekly complied, Leshchenko said. Several legislators asked for a formal debate, but Poroshenko’s ally and parliament speaker, Volodymyr Groysman, blocked that move and included the ministry’s creation within the single up-or-down vote permitted to parliament on the approval of all twenty-two cabinet positions. By the evening of December 2, barely sixty hours after the policy-announcement-by-Facebook, the ministry’s existence was fact.

Leshchenko called the new ministry a time bomb that threatens Ukrainian democracy. “This ministry is being created for many years to come; it’s impossible to foresee its activities. Today it is in these hands, tomorrow it can be in the hands of yesterday’s corrupt dictators and rulers.”

Ministry Will ‘Spread the Truth’

Poroshenko dismissed such fears. The ministry’s “purpose is to counteract information attacks against Ukraine and spread the truth about Ukraine” he said.

Stets amplified: “Had we created an information ministry in 1991 we would not have lost the war for Crimea and the east. First and foremost we lost the war in people’s heads” he said in a BBC interview. Stets is eager to reinstate Ukrainian television programs in the southeastern zone of Donbas, which has been seized by Russian and Russian-proxy troops.

The international media monitoring group Reporters Without Borders called the move a “retrograde step that would open the way to grave excesses.” It said, “Enlisting journalists in a government-managed information war would just undermine the public’s confidence in the national media. … Media independence and media freedom are the best weapons against propaganda.” The media freedom monitor for the Organization for Security and Cooperation in Europe agreed.

The Atlantic Council’s own Roadmap for Ukraine, issued in July, proposed a strategy for the country to counter the massive propaganda war being waged against it by Russia. It recommends breaking the oligarchy of Ukrainian billionaire business owners, including Poroshenko, on broadcasting in the country. It also suggests a public broadcast organ with the independence of Ukraine’s Hromadske channel but the greater resources and impact of an institution like Britain’s BBC. To improve the government’s public diplomacy, the roadmap urges the hiring of information and communications specialists for government bodies and communications training for officials.

Still, Poroshenko’s government showed determination and effectiveness in forcing through an unpopular change in government—a capacity it will need in accomplishing its promised economic and governance reforms. A sixty-hour victory on any major anti-corruption law might go a long way to redeeming the leadership in the eyes of its pro-democracy critics.

Image: Petro Poroshenko meets journalists May 25 after voting in the election that made him president. He told his supporters in parliament last week that an information ministry “is my political demand.” (Reuters/Gleb Garanich)