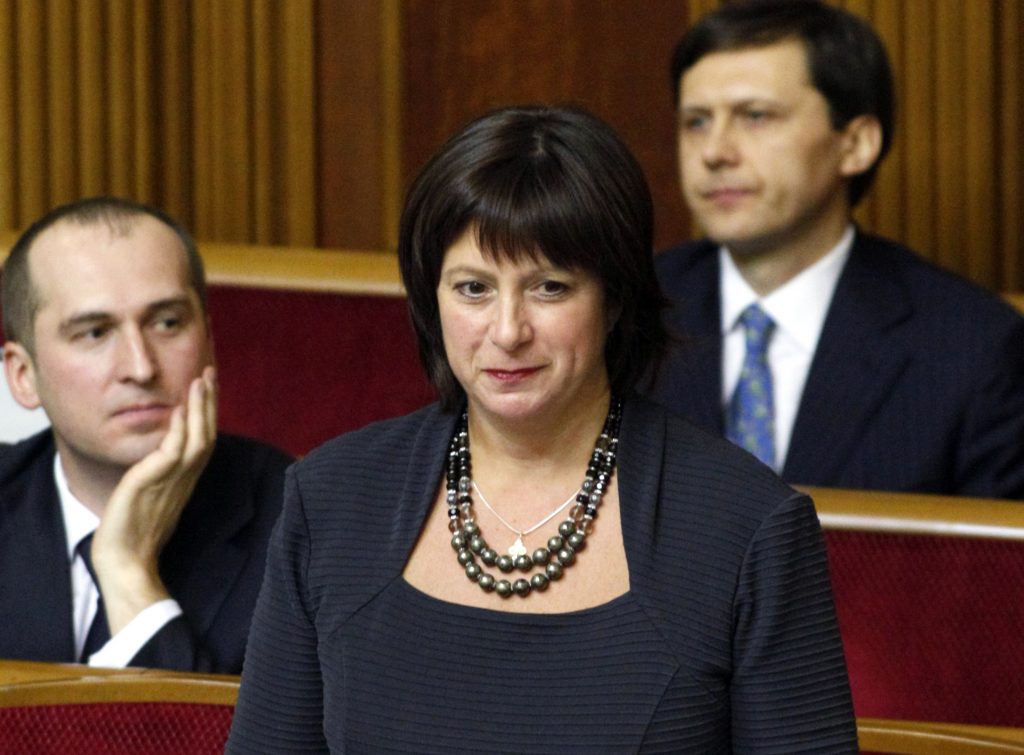 US- and Lithuanian-Born Officials Will Be Independent, Competent—and New to Governing in Kyiv


The race is on. With Ukraine’s finances running thin and the country needing a bigger bailout from its western allies, the country’s new cabinet took office this week pledging to floor the accelerator on the spending cuts and reforms needed to begin stabilizing and building an economy that has shrunk this year amid the war with Russia.

A day after the parliament approved the cabinet—including an American, a Lithuanian and a Georgian—the new Ukrainian-American finance minister, Natalie Jaresko, said she aims to slash the state budget in just seventeen days (by December 20) and have legislators pass it by the end of the month. That would facilitate an early return to Kyiv of International Monetary Fund specialists who would then evaluate how quickly it can deliver the next tranches of loans upon which Ukraine now depends to run the state.

The new economy minister, Lithuanian investment manager Aivaras Abromavicius, quickly vowed to speed deregulation, privatization and a restructuring of state-owned enterprises. Deputy Prime Minister for Infrastructure Valeriy Voshchevskyi said this would include selling the state-run rail system, and road agency, which Ukrainian anti-corruption campaigners have said are rife with graft.

With their striking step of naming foreigners—also including former Georgian Health Minister Alexander Kvitashvili to head that ministry in Kyiv—“President Poroshenko and Prime Minister Yatsenyuk have demonstrated that this is a reform cabinet,” said John Herbst the director of the Atlantic Council’s Dinu Patriciu Eurasia Center, and a former US ambassador to Ukraine. Ever since the two leaders took office in the spring, Ukrainians—notably those of the pro-democratic and anti-corruption Maidan movement—have asked in the press and public discussion how truly committed to reform are Poroshenko, a multi-millionaire businessman, and Yatsenyuk, who has held office in past governments that failed to achieve radical change.

“Now, these appointments raise expectations that Poroshenko and Yatsenyuk are going to move swiftly against corruption and on other key issues that will transform Ukraine’s economy and governance,” Herbst said in an interview at the Council. “These officials are associated with reform and are not part of a system that has enabled the corruption of past governments. And if their plans for change are thwarted,” by the influence, for example of conservative bureaucrats or economic and political elites, “they will provide an early warning to Ukrainians that reform has gone” off the rails. Herbst said.

Poroshenko granted Ukrainian citizenship to the three foreign appointees, including Jaresko, a Harvard graduate from Chicago who returned to her family’s home country twenty years ago. She served as the first economics officer for the US Embassy in Kyiv before forming an investment firm that has pumped millions of dollars into Ukrainian businesses. While she is “a competent financier … she has no experience of the convoluted Ukrainian budget” and “will need to learn quickly and act decisively in an unfamiliar, antiquated bureaucratic environment with elaborate, ritualistic paper-based procedures and lots of political traps,” writes Bloomberg columnist Leonid Bershidsky.

The foreigners’ appointments send a strong message, Bershidsky writes. “Ukraine aspires to be a US ally and a good IMF client, and it admires the reforms that rid Lithuania and Georgia of their Soviet economic and cultural heritage.” Still, he says, that symbolism may not be matched by the reform commitments of other Cabinet members. He noted that pro-reform legislators were angered when Poroshenko presented the Cabinet as a group for approval, refusing to hold individual confirmation votes, and said one reason may have been the likelihood of rejection for Deputy Prime Minister Voshchevskyi or other appointees seen as too close to the previous corrupt government of ousted President Viktor Yanukovych.

Still, regarding Jaresko, she was not simply the choice of Poroshenko and Yatsenyuk, according to Interfax Ukraine. Lviv Mayor Andriy Sadovy, who heads Samopomich, the third-largest party in Ukraine’s new coalition, proposed that Jaresko be named first deputy prime minister, he said in a post on his Facebook page. “I propose that the status of first deputy prime minister in the future government be secured by the head of the economic unit and that Jaresko be appointed to this post… Despite the fact that she was born in the United States, she has lived in Ukraine for the past 20 years. She is a true patriot and is well aware of all our realities,” Sadovy wrote.