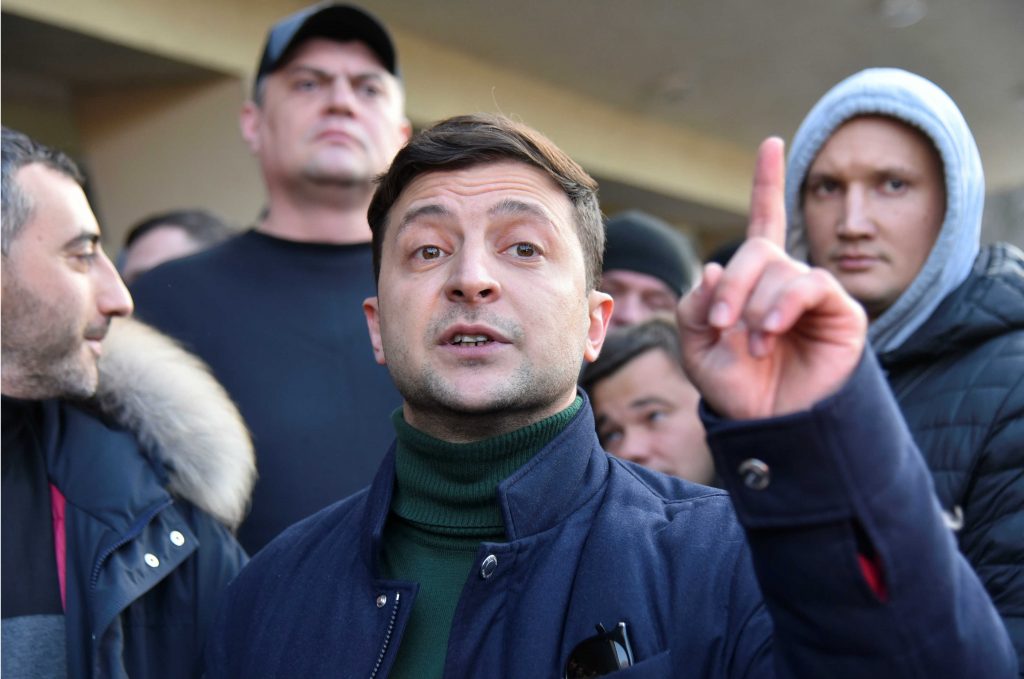 In a few weeks, a comedian may become the next president of Ukraine.

Volodymyr Zelenskiy, an unlikely candidate who plays an ordinary history teacher that becomes president of Ukraine on his popular TV series, Servant of the People, ranks as one of the most popular candidates in Ukraine’s March presidential election. Zelenskiy’s character, Vasyl Petrovych Holoborodko, is a Kyiv-based secondary school teacher, whose rant about government corruption and waste goes viral while he’s unknowingly filmed and vaults him to the presidency.

While much is known about Zelenskiy’s television character, relatively little is known about Zelenskiy the candidate and his stance on issues of importance to Ukrainian voters. A political neophyte whose political party is named for his television series, Servant of the People, Zelenskiy has surged to first place in a number of national surveys among a competitive field of candidates vying for the presidency. He’s edging out more established candidates, including incumbent President Petro Poroshenko and longtime politician and current Member of Parliament Yulia Tymoshenko.

A native of Kryviy Rih, a Russian-speaking, industrial city, Zelenskiy’s growing support can be seen as a clear indication of dissatisfaction with the ruling elite. In an era of Instagram and Facebook politics, Zelenskyi is active on social media and regularly shares posts and updates with his supporters, while offering few details of what he would do to address current frustration. In the absence of answers from Zelenskiy the candidate, voters are left with images of Zelenskiy the teacher-turned-president on television, who dreams of directing gunfire at the Ukrainian parliament in one of the first episodes of the show, Servant of the People.

Recent polling from SOCIS, KIIS, and Razumkov Center shows Zelenskiy leading the field with 17.3 percent support, over incumbent Poroshenko and Tymoshenko at a respective 12.3 and 11.8 percent.

While Zelenskiy’s rise in the polls has caused concern in some circles and excitement in others (many allege that he has links to oligarch Ihor Kolomoisky, business interests in Russia, and naïve foreign policy views), his victory is far from guaranteed two months out from election day. Although he now leads in some polls, an examination of the political outsider’s base of support suggests vulnerabilities that Zelenskiy’s campaign team would need to address ahead of election day in order to convert his support in the polls to actual votes.

One explanation for this is that Zelenskyi’s supporters are disproportionately young (18-35 years old), and IRI’s survey indicates that compared to other age groups, youth are the least likely to vote—only 26 percent of young people nationwide say they will “definitely” vote, compared to 37 percent of those 51 and older who say they will.

IRI data from October 2018 also indicates that many of Zelenskiy’s supporters aren’t as committed—in fact, they are some of the most likely to change their mind when deciding on a candidate leading up to the election. Thirty-nine percent of supporters said they were very or somewhat likely to change their mind—ten points higher than the national average of 29 percent.

What is clear, however, is that Zelenskyi’s support represents a desire among a sizeable portion of voters to see new faces in office—and his high name recognition along with favorability among voters makes him a competitive candidate. This same October survey found that 59 percent of Zelenskiy supporters believe that he will be able to make changes, and 79 percent believe that their candidate represents a new generation of politicians in Ukraine.

In Ukraine, anything can happen between now and March 31. Zelenskiy may lead this week, but the outcome is far from certain. A large number of undecided voters are still in play. Until Zelenskiy or another candidate can pick them up, the race is far from over.

Katie LaRoque is the Program Manager for Ukraine at the International Republican Institute. She tweets @katielaroque.

Image: Volodymyr Zelenskiy, Ukrainian actor and candidate in the upcoming presidential election, argues with his opponents, who staged a protest prior to Zelenskiy's concert in Lviv, Ukraine February 8, 2019. REUTERS/Mykola Tys