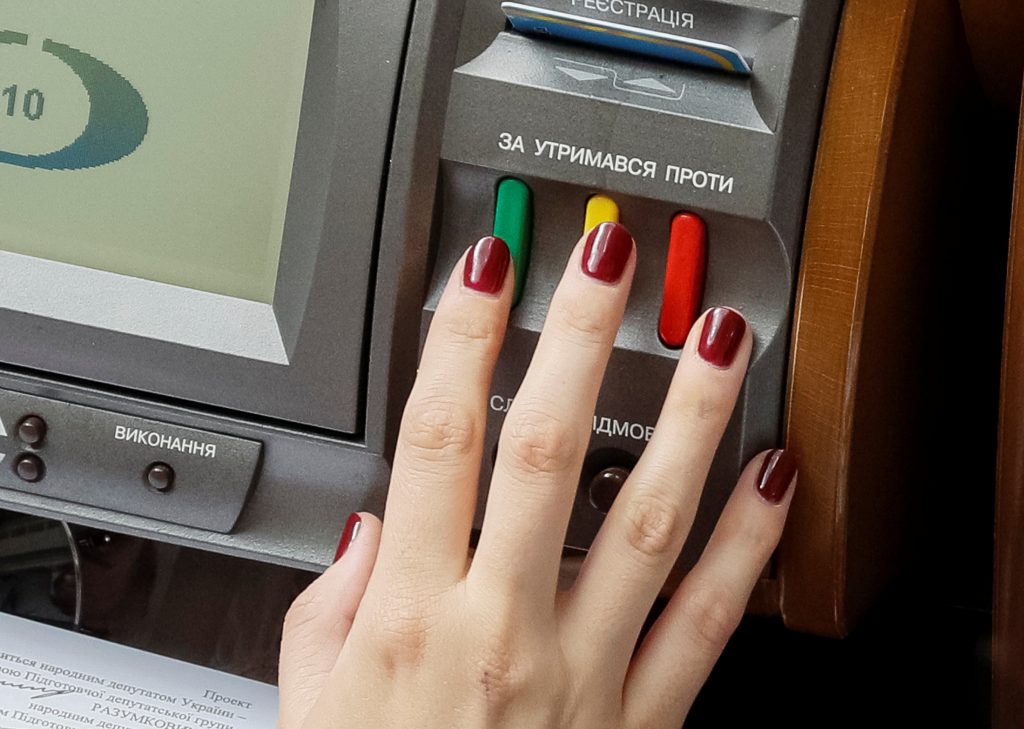 Ukraine scored a small but significant victory in the battle against political corruption on March 2 with the launch of a new voting system in the country’s parliament that should put an end to the widespread practice of Ukrainian MPs voting on behalf of absent colleagues.

Parliamentary deputies flooded social media with photos and videos following the early March presentation of the new voting system, which now includes an additional sensor feature. In order to cast their vote, MPs must activate the sensor with one hand while voting with the other. Crucially, they must keep the sensor activated throughout the duration of the voting period, thereby preventing them from voting on behalf of neighboring MPs. “Unless you know how to vote with your feet, it’s physically impossible [to multi-vote],” noted Ukrainian MP Oleksandra Ustinova of Holos party.

The Ukrainian parliament has long been plagued by incidents of multi-voting. Known locally as “Knopkodavstvo” (“buttoning”) or “Piano-voting”, the practice involves MPs using the parliamentary cards of non-attending colleagues to register votes. It has proven convenient for parties across the political spectrum, allowing them to harvest votes and cobble together majorities amid the often rapidly changing alliances and shifting sands of Ukraine’s diverse multi-party parliamentary system.

While such conduct has always been against parliamentary regulations, the authorities have often appeared powerless to prevent frequent flagrant examples. Indeed, over the years, scenes of MPs casually voting for no-show colleagues have come to be regarded as a symbol of Ukraine’s robust but often dysfunctional democracy. If the country’s lawmakers can routinely break the law while passing laws, it is hardly surprising that corruption continues to flourish in other areas of public life.

The introduction of a sensor function is the latest in a long line of attempts to outlaw multi-voting. Efforts began in 2008, when Parliamentary Speaker Arseniy Yatsenyuk first sought to introduce a sensor system. However, the proposed format was found to be technically flawed and vulnerable to abuses. Once these initial issues had been addressed, the initiative fell victim to a range of stalling tactics, legal challenges, and other contrived obstacles.

Multi-voting next appeared on the agenda in the immediate aftermath of the 2014 Euromaidan Revolution. With demands for reform dominating Ukraine’s post-revolutionary political landscape, there were calls to take decisive action against multi-voting. A tender was announced for a new parliamentary voting system, but no funding was ever allocated.

Following Volodymyr Zelenskyy’s presidential and parliamentary election successes of 2019, the piano-voting issue once more began to attract attention. In December 2019, MPs from President Zelenskyy’s Servant of the People party were instrumental in passing a law that introduced criminal liability for multi-voting. However, this failed to produce a flurry of prosecutions and had little discernible impact on actual instances of multiple voting in parliament. The first attempt to hold an MP legally accountable was announced by Prosecutor General Irina Venediktova just a few weeks ago on February 12.

After years of delays, excuses, and false starts, why has parliament now finally introduced a seemingly effective solution to the problem of multi-voting? One of the catalysts appears to have been the recent scandal over a late 2020 parliamentary vote to confirm Serhiy Shkarlet’s appointment as Minister of Education and Science.

Shkarlet was widely seen as a dubious choice for a ministerial role, with many questioning his academic record and his ties to the disgraced administration of Viktor Yanukovych. Despite these concerns, Shkarlet’s appointment was approved by the thinnest of margins. However, the legitimacy of the vote was subsequently thrown into doubt by claims that eight MPs from the pro-Kremlin Opposition Platform-For Life party had backed the controversial candidate despite being absent at the time of the vote. The ensuing furor put multi-voting firmly back on the political agenda and paved the way for this week’s apparent breakthrough.

The sensor voting system launched on March 2 is not in itself new. On the contrary, it utilizes the same sensor technologies that were first installed in the Ukrainian parliament back in 2008 but never activated. What’s changed is the political will to finally tackle multi-voting. This may be an indication of the evolving balance of power within parliament.

Some suspect that the decision to proceed with sensor-backed voting reflects the growing political ambitions of current Parliamentary Speaker Dmytro Razumkov, the person most directly responsible for the initiative. Razumkov’s name is popping up with increasing frequency as a potential future presidential candidate. Being seen as the man who brought the debacle of piano-voting to an end would certainly boost his standing among the Ukrainian electorate, both as a reformer and as a politician capable of getting things done. “Politically speaking, the introduction of sensor voting can be seen as a signal from Mr. Razumkov, who has suddenly decided to take this step after a year and a half as parliamentary speaker and at a time when his relationship with President Zelenskyy is deteriorating,” commented European Solidarity MP Oleksiy Goncharenko.

Regardless of the political motivations behind this week’s move, it is a clear win for Ukrainian democracy. For years, multi-voting made a mockery of Ukraine’s democratic credentials and undermined the authority of the country’s parliament. Sensor-protected voting is not a panacea, but it is a step in the right direction that mirrors Ukraine’s broader embrace of parliamentary traditions.

By Oleksandra Ustinova and Steven Pifer

Ukrainian MPs are currently preparing a long-awaited bill to reform the country’s security service. The initiative is encouraging but numerous measures are still required to distance Ukraine from the KGB past.

Image: The Ukrainian parliament introduced a new sensor-based voting system on March 2 that aims to end the widespread practice of MPs voting on behalf of absent colleagues. (REUTERS/Gleb Garanich)