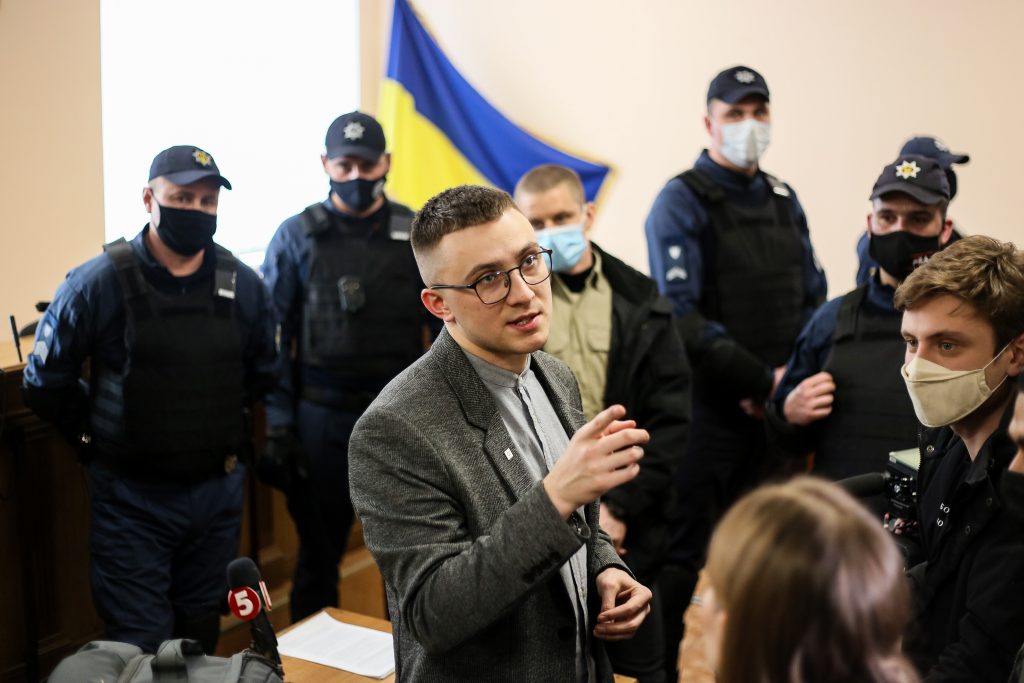 Serhiy Sternenko pictured during his sentencing in Odesa on February 23. (Herman Krieger/Watchers.Media)

Thousands took to the streets in cities across Ukraine this week to protest the seven-year sentence handed down to activist Serhiy Sternenko by an Odesa court on February 23. Officially, Sternenko was jailed for the 2015 kidnapping of a local politician. However, critics say he has been targeted for his pro-Ukrainian activism and anti-corruption stance. For many Ukrainians, his case reflects broader concerns over the alleged politicization of the country’s justice system and the continuing influence of pro-Kremlin figures within Ukraine’s political establishment.

Sternenko has been in the public eye for a number of years and has frequently attracted controversy. He initially rose to prominence as head of the Odesa branch of Ukrainian far-right nationalist group Right Sector, and was actively involved in efforts to prevent a Kremlin-led takeover of the Black Sea port city in spring 2014 during the initial phase of Russia’s ongoing hybrid war against Ukraine.

More recently, he has campaigned against illegal construction projects, attempted to expose corruption within the Odesa municipal authorities, and worked to prevent a number of Russian celebrities who supported the occupation of Crimea from entering Ukraine.

The Odesa activist has frequently been the target of violence and is perhaps best known to the Ukrainian public for a May 2018 attack which left him wounded and one of his two attackers dead. Sternenko has always maintained that he was acting in self-defense, but he still faces criminal proceedings and a murder charge.

This week’s guilty verdict related to an earlier incident, with Sternenko convicted of involvement in the April 2015 abduction of Odesa region politician Serhiy Shcherbych. While critics have pointed to numerous apparent flaws in the case against Sternenko, attention has also focused on the disturbing political background to the prosecution.

Many are concerned by the fact that the alleged victim in the case, Serhiy Shcherbych, is currently a member of Odesa Mayor Hennadiy Trukhanov’s personal political party. Trukhanov has long been accused of pro-Russian sympathies and ties to Odesa’s notoriously influential criminal underworld. Significantly, he has often been linked to corruption by Sternenko, who has used his high profile and popularity on social media to embarrass the Odesa mayor. Sternenko denies the abduction charges and has accused Trukhanov of involvement in fabricating all the cases against him.

If the local political context of the case against Sternenko gives cause for concern, the national optics offer little comfort. In particular, Ukraine’s Prosecutor General Iryna Venediktova has been accused by a former high-ranking member of the prosecution service of taking a personal interest in the numerous investigations involving Sternenko and pushing for charges to be brought against him. Viktor Trepak, who served as a deputy to Venediktova’s predecessor, Ruslan Ryaboshapka, has stated that he came into “serious conflict” with Venediktova soon after her March 2020 appointment when he questioned her insistence on naming Sternenko as a suspect.

The recent conviction of Sternenko and the alleged involvement of senior figures appointed by President Zelenskyy has led to renewed questions over the young Ukrainian leader’s attitude towards the past seven turbulent years of Ukrainian history. Many of those protesting this week have pointed to the similarly dubious charges that have been brought against other pro-Ukrainian activists and volunteers during the less than two years since Zelenskyy became president. They regard the conviction of Sternenko as an attack on all pro-Ukrainian forces and see it an act of revenge by pro-Kremlin elements seeking to reverse the setbacks suffered since 2014 by Russian interests in Ukraine.

Not everyone is convinced by these claims. The drama over Sternenko’s conviction comes just a few weeks after President Zelenskyy moved to ban three pro-Kremlin Ukrainian TV channels linked to Vladimir Putin’s closest ally in Ukraine, Viktor Medvedchuk. This move, along with subsequent personal sanctions imposed on Medvedchuk and his wife, has been widely interpreted as a decisive step by Zelenskyy in support of Ukraine’s struggle against Russian aggression.

However, only a handful of companies linked with Medvedchuk were actually subjected to sanctions, leading to doubts over to the ultimate significance of the measures. Moreover, the three banned TV channels are reportedly preparing to re-register and resume broadcasting.

Meanwhile, the implications of Sternenko’s seven-year jail sentence remain chilling. His conviction sends out a signal that anyone in Ukraine who dares to oppose corruption or adopt a pro-Ukrainian position risks potential prosecution and jail time. It also serves to further undermine public confidence in the deeply discredited Ukrainian justice system.

As he approaches the second anniversary of his historic spring 2019 election victory, President Zelenskyy already stands accused of falling short on his campaign trail promises of judicial reform. He now faces far graver allegations of politicized justice that raise serious doubts over his commitment to transforming Ukraine.

Ukraine’s third president, Viktor Yushchenko, came to power on a tide of history but left office in humbling circumstances after a single term. Is it now time to reevaluate the transformative effect of his presidency?