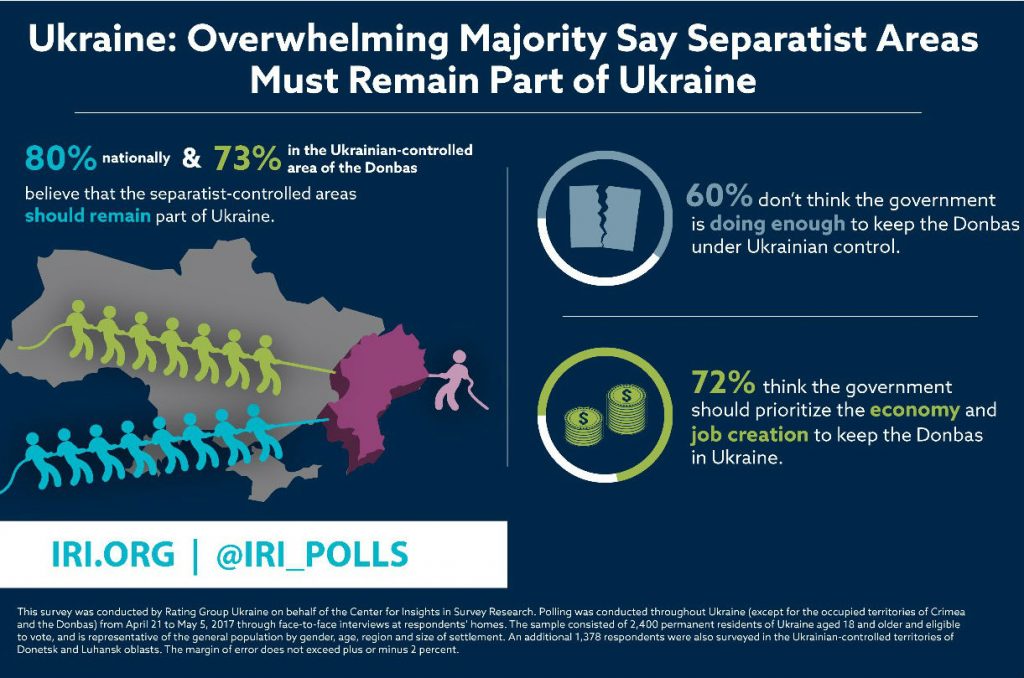 Most would like to see this war come to a close—with more than 10,000 lives lost and over 1.7 million internally displaced people, it is the deadliest and most disruptive conflict in Europe since the 1990s. With rumors that the Trump administration plans to restart the Ukraine peace process, the question of what a lasting peace deal would look like has resurfaced again.

A new poll by the International Republican Institute (IRI) suggests that any agreement which would permanently cede control of Ukrainian territory is likely to meet staunch opposition within Ukraine. The survey—which focuses on issues related to the conflict and contains an oversample of residents of the Ukrainian-controlled territories of the Donbas—reveals that an overwhelming majority of Ukrainians believe that the Donbas region should remain part of Ukraine. Indeed, 80 percent nationally and 73 percent in the Ukrainian-controlled area of the Donbas think the separatist-controlled areas must remain part of Ukraine.

Graph 1: IRI’s national sample on the future of the separatist-controlled territories. Credit: IRI.

Graph 2: IRI’s Donbas oversample on the future of the separatist-controlled territories. Credit: IRI

While some have suggested that reintegrating the separatist-controlled areas of the Donbas into Ukraine lacks political support or would bankrupt Ukraine, IRI’s data refutes the notion that the occupied region could be used as a bargaining chip in negotiations. Put simply, Ukrainians will not accept the division of their country. In fact, only six percent nationwide and four percent in the Donbas believe that these areas should either be separated from Ukraine or become part of Russia.

The consistency in public opinion on the future of the Donbas from both the national sample and the Donbas oversample underscores an important unity of vision for Ukraine’s future. In addition to their concerns over the war in the Donbas, Ukrainians identified corruption within state bodies, unemployment, and inflation as the top three issues facing the country.

A desire to see the economy improve is undoubtedly a result of a prolonged economic crisis. Although the economy is finally starting to grow slowly, IRI’s data shows that these improvements are not yet being felt at the household level. That said, reinvigorating Ukraine’s economy presents both a challenge and opportunity. The challenge is rather obvious, but the opportunity is less so; it is also an opportunity to bring Ukrainians together behind a coherent program to rebuild and unite their country. With 72 percent of Donbas residents citing job creation and economic improvements as the best ways to keep the Donbas part of Ukraine, there is a clear desire for the government to address these problems as a means of uniting Ukraine.

As policymakers revisit the ongoing conflict in Ukraine, it will be critical to keep this data in mind. It is imperative that the wishes of the Ukrainian people to preserve their territorial integrity be considered nonnegotiable.

Katie LaRoque is a Program Officer for Ukraine at the International Republican Institute. She tweets @katielaroque.

Image: A new poll by the International Republican Institute (IRI) reveals that an overwhelming majority of Ukrainians believe that the Donbas region should remain part of Ukraine. Credit: IRI