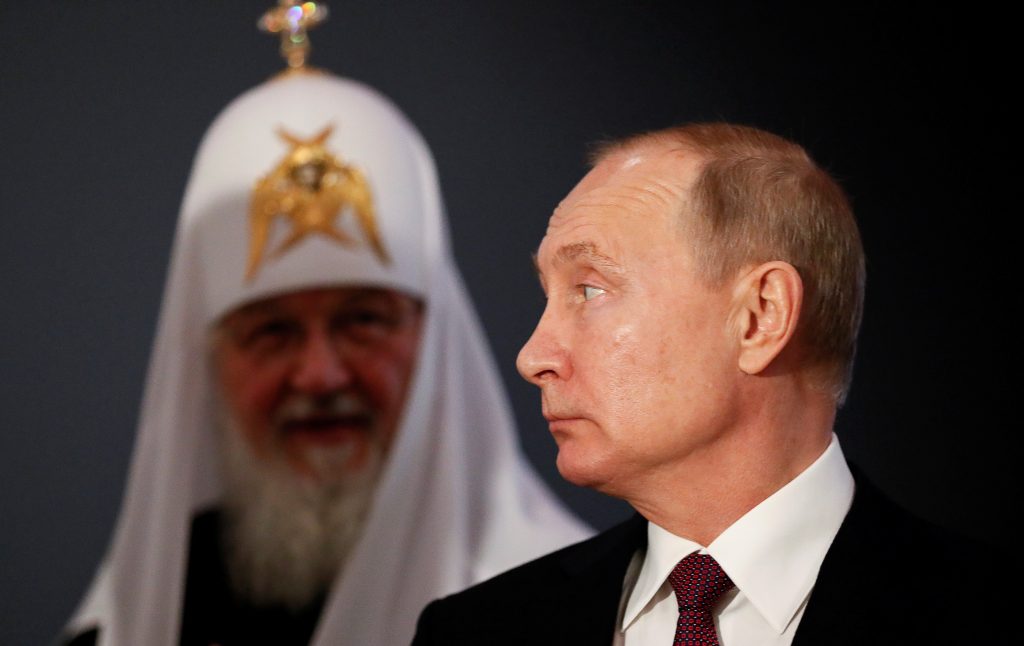 Britain has this week imposed sanctions on Russian Orthodox Church leader Patriarch Kirill for his “prominent support of Russian military aggression in Ukraine.” This dramatic step was not entirely unprecedented. The European Union similarly sought to sanction Patriarch Kirill in early June but the initiative was blocked by Hungary.

The UK move follows on from widespread criticism of the religious leader’s stance in support of the war in Ukraine, with Pope Francis earlier urging his Russian colleague to stay out of politics in order to avoid becoming “Putin’s altar boy.” Opposition has also been registered across the Orthodox world and from within the ranks of the Russian Orthodox Church itself, with individual priests and entire congregations seeking to distance themselves from the Patriarch as the horrors of the conflict in Ukraine have become increasingly apparent.

Patriarch Kirill has come under fire for repeatedly portraying the invasion of Ukraine as a holy war while endorsing Putin’s denials of Ukrainian independence and repeating Kremlin propaganda about imaginary fascists. During one fairly typical sermon in mid-March at the Christ the Saviour Cathedral in Moscow, Patriarch Kirill attempted to justify the war, saying it was essential to “defend God’s truth” that Russians and Ukrainians were “one people” joined by a “common national identity.”

Since being appointed in 2009, Patriarch Kirill has been an enthusiastic supporter of the Kremlin’s revisionist foreign policy. He has preached a doctrine of imperial expansion in the former Soviet space while championing domestic authoritarianism and describing Putin’s increasingly dictatorial rule as “a miracle of God.”

This support has proven particularly important following Putin’s return to the presidency in 2012 and his turn towards open imperialism. Prior to the outbreak of hostilities with Ukraine in 2014, the Russian Orthodox Church featured prominently in Moscow’s efforts to persuade Ukrainians to reject Euro-Atlantic integration and embrace notions of spiritual unity with Russia.

Patriarch Kirill fanned the flames of the escalating conflict by echoing the Kremlin and condemning the alleged persecution of Russian-speaking Ukrainians. Meanwhile, Orthodox priests from Ukraine’s Moscow Patriarchate sparked fury and disbelief by refusing to carry out funerals for Ukrainian soldiers killed defending the country against Russian invasion.

Patriarch Kirill’s cheerleading for the Kremlin’s ongoing eight-year military campaign against Ukraine reflects Putin’s own view of the Russian Orthodox Church as the spiritual glue that binds the “Russian World” together.

The “Russian World” is vague but powerful concept championed by Putin of a wider civilizational community transcending modern national borders and state sovereignty. It is rooted in notions of a common religion, language and cultural heritage, with the Russian Orthodox Church providing the institutional foundations for this informal empire. For more than a decade, advocates of the “Russian World” have recognized the reconquest of Ukraine as their primary objective.

The Russian Orthodox Church has consistently supported the Kremlin’s historical claims to dominance over Ukraine while working against Ukrainian efforts to assert an independent identity. This has included the rehabilitation of empire-builders from previous generations and the glorification of tyrannical Russian leaders such as Ivan the Terrible and Joseph Stalin within a cult of imperialism, chauvinism, and xenophobia.

Unsurprisingly, this had fueled anger and opposition throughout Ukrainian society, where the vast majority of the population identifies as Orthodox. Millions of Ukrainians remain at least nominally aligned to the Kremlin-backed Moscow Patriarchate. However, Patriarch Kirill’s stance has forced many to question their loyalties.

Britain’s highly unusual recent decision to sanction Patriarch Kirill highlights the extent of international alarm over the Russian Orthodox Church’s decision to support the largest European invasion since WWII. There is a growing consensus among Western governments, religious leaders of different denominations and even members of his own Church that Patriarch Kirill of Moscow now has blood on his hands. As condemnation mounts, this week’s UK sanctions measures are unlikely to be the last.

Taras Kuzio is a professor of political science at the National University of Kyiv Mohyla Academy and author of the recently published book “Russian Nationalism and the Russian-Ukrainian War.”

Image: Russian President Vladimir Putin and Patriarch Kirill of Moscow and All Russia visit the exhibition "Memory of Generations: the Great Patriotic War in Pictorial Arts" on the National Unity Day in Moscow. November 4, 2019. (REUTERS/Shamil Zhumatov/Pool)