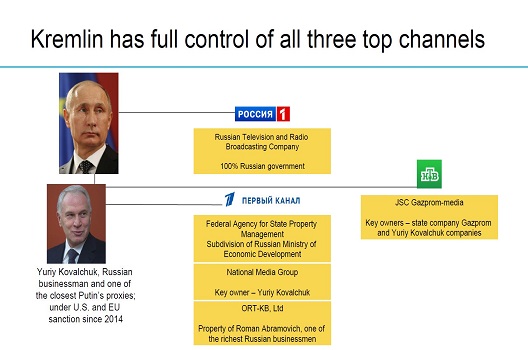 In 2014, Russian-backed rebels used a Moscow-supplied missile to shoot down Malaysia Airlines flight 17 over eastern Ukraine, killing all 298 people on board. Russian state TV made wild claims such as the passengers were already dead, a Ukrainian fighter jet shot down the plane, and the CIA was behind the plot.

Since 2016, Russian hacking, influence, money laundering, and collusion in US elections has been the subject of headlines and Congressional or legal probes against dozens of individuals, including President Donald Trump and his team, as well as social media companies. “So what if they’re Russians, said Putin in an interview. “They do not represent the interests of the Russian state.”

In 2018, a Russian military intelligence officer, convicted of being a double agent for Britain, was poisoned with a rare nerve agent in London, and with his daughter, years after relocating there. Russia’s foreign minister, Sergei Lavrov, claimed that Russia did not possess the nerve agent, but the United States, United Kingdom, and NATO did. Russian TV news suggested that Skripal’s daughter has been abducted and hidden and the British had destroyed evidence and ignored international norms.

These are examples of the Kremlin’s disinformation playbook when it comes to crisis management abroad. But they are also saturation bombing their citizens and others beyond their borders, with ongoing false narratives designed to undermine elections, governments, and societies. Putin’s info-war has now metastasized and afflicts all media and politics.

Many leaders are becoming aware of this reality, but a recent survey of Russian TV news by the Ukraine Crisis Media Center and Estonian Center of Eastern Partnership quantifies the scale of the assault against Ukraine and Europe between the summer of 2014 to December 2017. On Russia’s three state-controlled TV channels, anti-Europe news was shown an average of eighteen times per day.

The narratives are that Europe is morally bankrupt, weak, impoverished, and riddled with crime and terrorism. France was featured during its recent presidential election, to help Putin’s candidate Marine Le Pen. Macron was smeared routinely in newscasts attacking his fiscal track record and sexuality. Footage showed beggars on streets, police swarms, and allegations of fake protests against terrorism.

Trolls spread these lies through social media and websites inside and outside Russia. The result, in France, has been a fierce backlash and proposed legislation to control sponsored content and to ban “fake news” on social media sites during elections. The laws will give officials powers to remove content or block the website to “protect democracy.”

The survey includes reels of highlights taken from Russian TV about the rest of Europe with newscasters fabricating crazy stories: Scandinavian and German governments removing children by the tens of thousands from traditional families to give to gay couples to raise; European governments contemplating legalizing incest; and about European, Canadian, Finnish, Norwegians, and Americans stealing Russian babies.

Unfortunately, the fearmongering and propaganda inside Russia yields results and polls there in 2017 found that the United States, Ukraine, and Europe are considered Russia’s top enemies. Aiding this echo chamber is the fact that Russians are isolated linguistically and geographically, said the survey, with only 5 percent speaking English and only 7 percent traveling outside the country.

For these and other reasons, Russia remains the most dangerous country in the world despite its own poverty and weaknesses. It punches above its weight because of its gigantic nuclear arsenal and ruthless leader. This is why, as Putin wages “hybrid warfare,” the West must prevent and counter its effects vigorously. And the study helps illustrates the enormous resources that are being deployed to spread lies and hate, and the need for counterattacks.

The cumulative danger of Russia’s warfare is now a threat to all Internet users, as Russian opposition leader Alexei Navalny wrote in a 2016 paper: “Paid trolls have made it impossible for the normal Internet user to separate truth from fiction.”

Image: The Kremlin controls the top three television stations in Russia, according to a new survey of Russian TV news by the Ukraine Crisis Media Center and Estonian Center of Eastern Partnership. On Russia’s three state-controlled TV channels, anti-Europe news was shown an average of eighteen times per day. Credit: Courtesy Screenshot