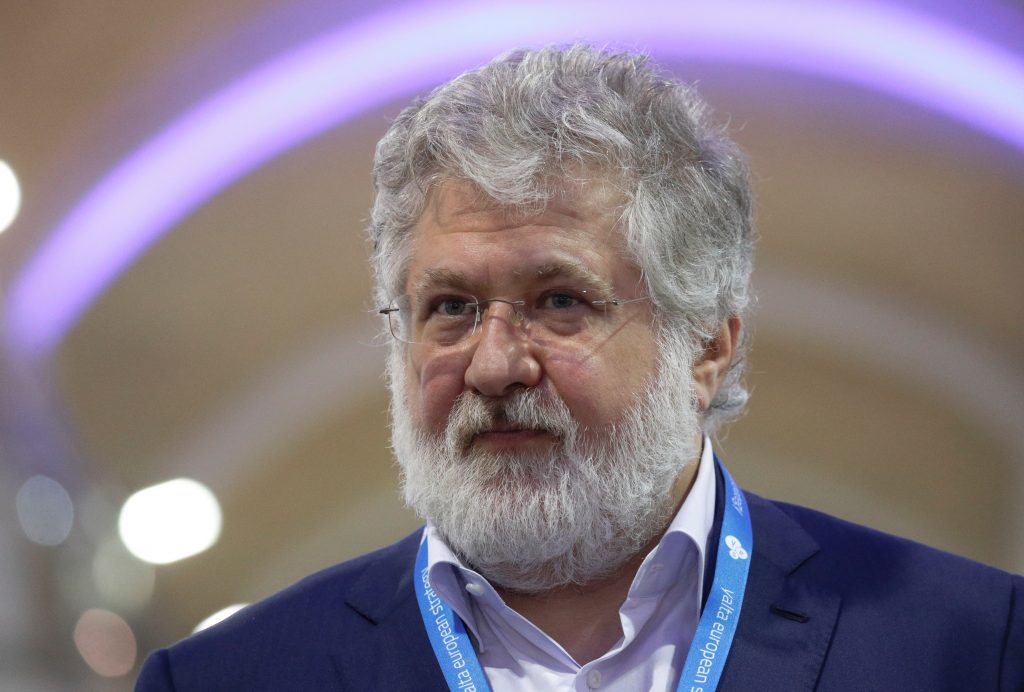 The United States imposed sanctions against Ukrainian oligarch Ihor Kolomoisky on March 5 in a move that underlined American support for Ukraine’s Euro-Atlantic integration and indicated a toughening stance in Washington DC towards the country’s over-powerful oligarch elite.

The US State Department announced the public designation of Kolomoisky due to his involvement in “significant corruption” in his official capacity as governor of Ukraine’s Dnipropetrovsk Oblast from 2014 to 2015. A statement accompanying the news claimed the designation “reaffirms the US commitment to supporting political, economic, and justice sector reforms that are key to Ukraine’s Euro-Atlantic path. The United States continues to stand with all Ukrainians whose work drives reforms forward. The Department will continue to use authorities like this to promote accountability for corrupt actors in this region and globally.”

While the State Department decision does not involve any financial sanctions, it does mean Kolomoisky and his immediate family members are now unable to enter the United States.

The Office of Ukrainian President Volodymyr Zelenskyy appeared to welcome the news, releasing a statement declaring “Ukraine must overcome a system dominated by oligarchs” and acknowledging that “Ukraine is grateful to each partner for its support along the way.”

Many observers interpreted the sanctions measures as a signal from the US that it now expects Zelenskyy to take his own steps against Kolomoisky. Zelenskyy won election in 2019 as an anti-establishment candidate promising to end decades of oligarch dominance, but he has so far struggled to deliver on his campaign promises of a new era. Instead, he has faced lingering accusations of being too close to Kolomoisky, whose media empire helped establish Zelenskyy as one of Ukraine’s most popular celebrities. Meanwhile, since 2019, Kolomoisky has become increasingly closely associated with efforts to derail crucial anti-corruption reforms and undermine Ukraine’s ties with the country’s Western partners.

What does the US decision to sanction Ihor Kolomoisky mean for Ukraine’s domestic balance of power and the future direction of the US-Ukrainian relationship?

Daniel Fried, Distinguished Fellow, Atlantic Council: The State Department’s March 5 “designation” of Ukrainian oligarch Ihor Kolomoisky and his immediate family demonstrates the Biden administration’s support for Ukraine’s democratic, economic, and justice sector reforms that it rightly identifies as key to the country’s Euro-Atlantic future. Coming early in the administration, the Kolomoisky designation suggests that Ukraine is on the US government’s radar.

By targeting Kolomoisky, the administration has shown it understands that Ukraine’s challenges include both external aggression from the Kremlin and internal corruption–namely, the “iron ring” of oligarchic power over Ukraine’s economy and politics that keeps the country from realizing its potential and weakens it to Putin’s advantage.

President Biden should call President Zelenskyy soon, especially after the mess made by President Trump, who seemed to regard Ukraine mainly through the prism of his personal partisan interests. Still, this move by the Biden administration is sound. The penalty on Kolomoisky is visa denial, not full blocking sanctions. Those may follow. This initial step has the advantage of speed (full blocking sanctions based on corruption would take more time to prepare). The message to Ukraine is clear: the US stands behind its transformation and calls on Ukraine’s leaders to do their part at home even as they defend the country.

Tetiana Shevchuk, Legal Counsel, Anti-Corruption Action Centre: The designation of Ihor Kolomoisky by the US State Department sets an outstanding precedent for Ukraine as well as US-Ukraine relations. First of all, the US government clearly demonstrates that they will not put talk of new global anti-corruption policies on the back burner. Countering foreign oligarchs and their dirty money will be an essential part of fighting global corruption. Ukraine will be an important battleground where the US can demonstrate the effectiveness of practical deoligarchization tools.

Secondly, it is also a clear signal to the Ukrainian political and business establishments. Those who cooperate with Kolomoisky or mirror his efforts to meddle with Ukraine’s Euro-Atlantic integration may soon find themselves next in line for similar sanctions measures.

This step can also be read as a personal message to Ukrainian President Volodymyr Zelenskyy, reminding him of his commitment to fight against the dominance of the country’s oligarchs. The Office of the President stands accused of siding with oligarchs against independent anti-corruption institutions on a number of occasions. New US measures against Kolomoisky are a signal to Zelenskyy that he must match his words with actions.

Diane Francis, Senior Fellow, Atlantic Council: Ihor Kolomoisky and his immediate family have been banned from entering the US by its State Department. This follows the US Justice Department’s civil case alleging that Kolomoisky and his business partner, Hennadiy Boholyubov, stole billions of dollars from Privatbank in Ukraine and laundered the money by buying real estate and companies in the US.

The action is unprecedented and is good news for Ukraine and other countries struggling against corruption. The entry ban imposed on Kolomoisky represents an emphatic endorsement of Ukraine’s struggle against oligarch domination and also serves as a warning to corrupt officials everywhere that they and their families may be sanctioned next.

The State Department’s action constitutes encouragement for Ukrainian President Volodymyr Zelenskyy’s anti-corruption campaign and establishes that the United States will help punish corrupt actors for crimes they have committed in their own countries. It is a milestone that globalizes the fight against those who rob their countries and invest the proceeds abroad.

Alyona Getmanchuk, Director, New Europe Center: The public designation of Ukrainian oligarch Ihor Kolomoisky and his family by the US sends three important signals to Ukraine. Firstly, it shows that the current US administration is serious about democracy and combating corruption. To a certain extent, this move is a good preparatory step toward the Global Democracy Summit which President Biden has promised to hold during his first year in office. Secondly, given US concerns about Kolomoisky’s efforts to undermine democratic processes and institutions in Ukraine, the designation shows that the Biden administration is committed to Ukraine and the country’s future development.

Thirdly, US-Ukraine relations for the last seven years have been defined to a significant degree by the level, intensity, and consistency of US sanctions toward Russia. Recently, however, the tone of bilateral dialog has also been shaped by US sanctions targeting a number of Ukrainians.

President Zelenskyy’s response to the new US measures against Kolomoisky will go a long way to determining the character of the US-Ukrainian relationship in the near future. Now that the US has taken the first step and targeted Kolomoisky, the Ukrainian leader is under pressure to deliver on his promises of deoligarchization. It is important for both the US and Ukraine that there be no double standards in this process or attempts to differentiate between “good” and “bad” oligarchs.

Brian Bonner, Chief Editor, Kyiv Post: The US decision to designate Ihor Kolomoisky is a very good sign. In this declaration, the US offers encouragement, support and, essentially, a directive to go after Kolomoisky, who has not been criminally charged with bank fraud in Ukraine for the USD 5.5 billion collapse of Privatbank despite abundant evidence. The US should publicly assign such designations to more of Ukraine’s toxic tycoons, and Ukraine’s prosecutors, police, and courts should stop protecting high-level criminality by the country’s elite.

Taras Kuzio, Professor, National University of Kyiv Mohyla Academy: The recent US measures against Ihor Kolomoisky echo the much earlier conviction of former Ukrainian prime minister Pavlo Lazarenko by a United States court. In both cases, the US proved more determined to pursue corrupt Ukrainian oligarchs than the Ukrainian authorities themselves.

Like all anti-establishment populists, Ukrainian President Volodymyr Zelenskyy came to power criticizing elite corruption. However, since taking office, he has struggled to combat oligarch power. The US decision to designate Kolomoisky indicates that Zelenskyy will now face increasing pressure from Ukraine’s Western partners to undertake steps against the country’s oligarchs.

It remains difficult to imagine Kolomoisky actually receiving a jail sentence in Ukraine. Instead, a far more likely scenario would see him tipped off and able to flee abroad. Nevertheless, with Zelenskyy now coming to the realization that a peace deal with Russian President Vladimir Putin is impossible, continued US support will be more vital than ever for Ukrainian security. This leaves the Ukrainian leader with limited room to maneuver over demands to curb the influence of Kolomoisky and Ukraine’s other oligarchs.

As events in recent weeks have shown, President Zelenskyy is prepared to challenge the power of Ukraine’s oligarchs everywhere from the energy and banking sectors to politics and the media.

Image: Ukrainian oligarch Ihor Kolomoisky (seen here in a September 2019 file photograph) was sanctioned by the US State Department on March 5. (REUTERS/Valentyn Ogirenko)