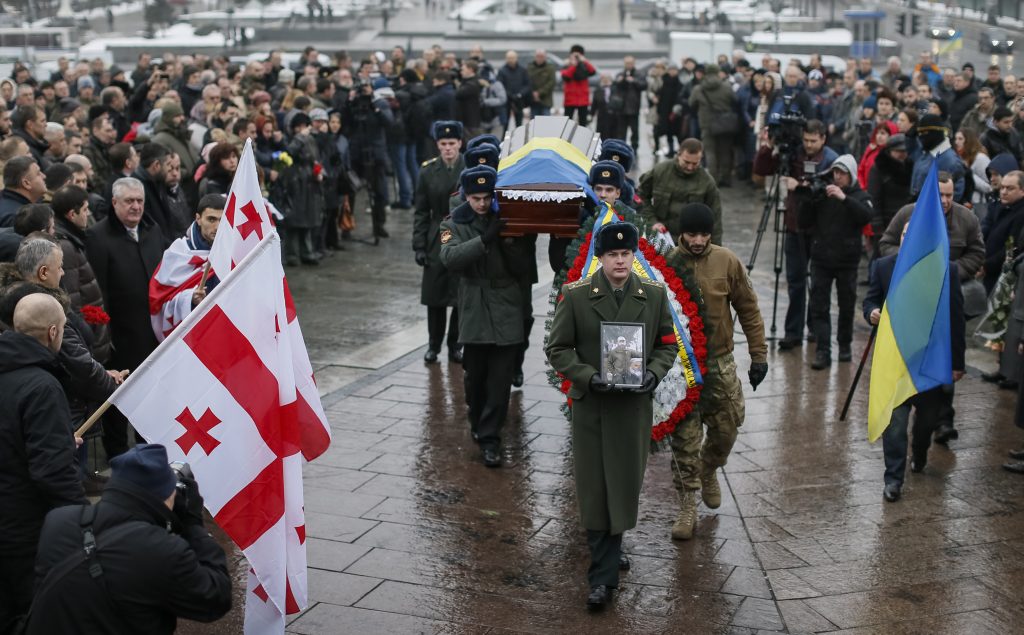 Ukrainian troops in Kyiv carry the coffin of Georgian soldier Tomaz Sukhiashvili, 35, who was killed in January's intensified war against Russian-sponsored separatists in southeast Ukraine. As Ukraine struggles to reinforce its army against fears of a new Russian offensive, former US officials urged the US to fulfill Ukaine's appeal for defensive weapons. (Reuters/ Gleb Garanich)

Eight former senior US officials—diplomats, ranking Pentagon and State Department office-holders, military commanders and US appointees to NATO—today urged the Obama administration and its NATO allies to strengthen support for Ukraine by urgently providing military aid, including defensive weapons, for its defense against Russia’s invasion.

The US and European economic sanctions on Russia “are critical but not by themselves sufficient” to deter Russian President Vladimir Putin from continued “aggression that poses a threat not just to Ukraine but also to … Europe and the transatlantic community,” says a report released by the group. The Obama administration “should provide Ukraine $1 billion in military assistance as soon as possible,” including radar systems to detect artillery batteries, light missiles to oppose tanks, secure radios, and armored Humvees, the report says. (Read the report’s executive summary, below.)

Other NATO states may be ready to help in supplying arms to Ukraine, but only if the United States leads, the eight former officials write. Those countries—including Canada, Poland, the Baltic States and perhaps Britain—“are reluctant to go first and run the risk of political exposure” while the U.S. government refuses to accommodate Ukraine’s pleas for defensive arms.

Four of the eight co-authors of a joint think-tank report on Ukraine discussed the crisis at the Atlantic Council. Watch the video above.

While Ukraine has fought tenaciously against the eight-month-old Russian-sponsored war in southeastern Ukraine’s Donbas region, its hastily assembled army has an “abysmal” supply of key weapons, the report says. Only a better-armed Ukrainian military can deter further Russian offensives aimed at dismembering the country, crippling its independence, and re-establishing Russia’s Soviet-era dominance over much of Eastern Europe, according to the report.

The eight former officials, several of whom gathered to issue the report today at the Atlantic Council, now are associated with the Council, the Brookings Institution, the Center for a New American Security and the Chicago Council on Global Affairs. The eight co-authors are:

Read the report’s executive summary, below:

Preserving Ukraine’s Independence, Resisting Russian Aggression: What the United States and NATO Must Do

We face a critical juncture in Ukraine.  There is no real ceasefire; indeed, there was a significant increase in fighting along the line of contact in eastern Ukraine in mid-January, with Russian/separatist forces launching attacks on the Donetsk airport and other areas.  Instead of a political settlement, Moscow currently seeks to create a frozen conflict in eastern Ukraine as a means to pressure and destabilize the Ukrainian government.  Russians continue to be present in the Donetsk and Luhansk oblasts in substantial numbers and have introduced significant amounts of heavy weapons.  This could be preparation for another major Russian/separatist offensive.

Russian success would fatally undermine Ukraine’s stability and embolden the Kremlin to further challenge the security order in Europe.  It might tempt President Putin to use his doctrine of protecting ethnic Russians and Russian speakers in seeking territorial changes elsewhere in the neighborhood, including in the Baltic States, provoking a direct challenge to NATO. Maintaining Western sanctions are critical but not by themselves sufficient.  The West needs to bolster deterrence in Ukraine by raising the risks and costs to Russia of any renewed major offensive.

That requires providing direct military assistance—in far larger amounts than provided to date and including lethal defensive arms—so that Ukraine is better able to defend itself.  The U.S. government should provide Ukraine $1 billion in military assistance as soon as possible in 2015, followed by additional tranches of $1 billion in FY 2016 and FY 2017.

Lethal defensive military assistance should include light anti-armor missiles, given the large numbers of armored vehicles that the Russians have deployed in Donetsk and Luhansk and the abysmal condition of the Ukrainian military’s light anti-armor weapons.

Assisting Ukraine to deter attack and defend itself is not inconsistent with the search for a peaceful, political solution—it is essential to achieving it.  Only if the Kremlin knows that the risks and costs of further military action are high will it seek to find an acceptable political solution.  Russia’s actions in and against Ukraine pose the gravest threat to European security in more than 30 years.  The West has the capacity to stop Russia.  The question is whether it has the will.