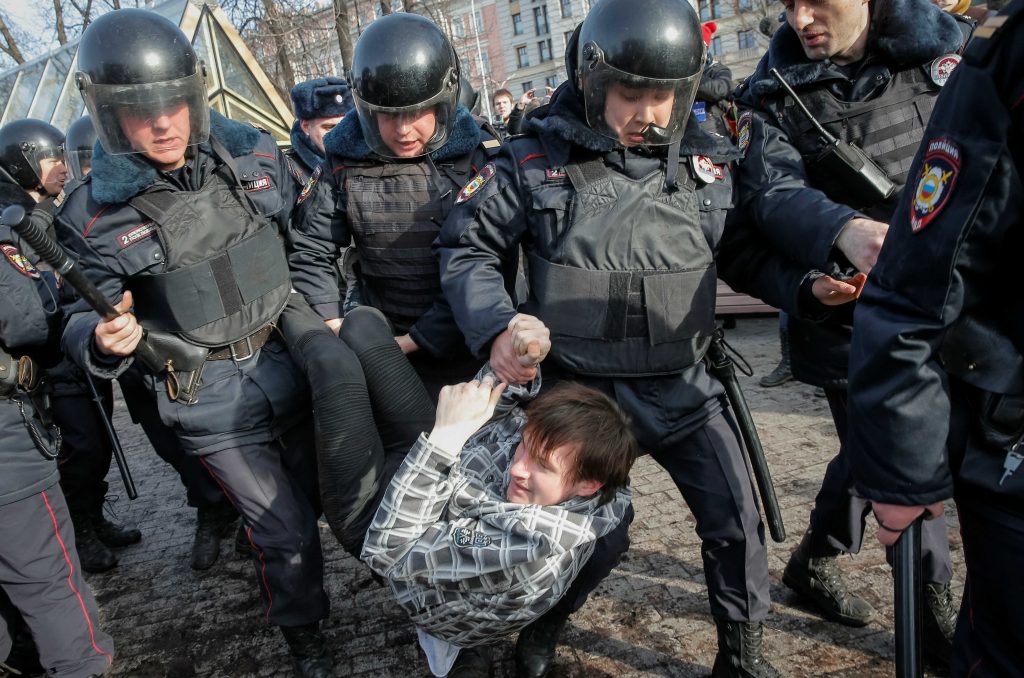 The poem and song, “The Revolution Will Not Be Televised,” became a rallying cry for social injustice in America in the 1970s. It weaved its way through many cultural eras around the world and found its way to the streets of Russia on Sunday, March 26.

Nearly 100,000 people went to the streets in more than ninety cities, from Vladivostok to Kaliningrad. Sunday’s protests were the largest anti-government protests since the demonstrations for fair elections in 2011-2012. They touched not only big cities, but took place in smaller places like Saratov and Tyumen that were previously “sleepy” and apolitical.

A huge number of young people, including schoolchildren, participated, and this was the most striking difference between Sunday’s protests and the 2011-2012 ones. It was remarkable to see hundreds of young faces all across Russia, from Vladivostok in the Far East, to Tomsk and Novosibirsk in Siberia, to Yekaterinburg and Chelyabinsk in the Urals, and Samara in the Volga region.

While a new generation of Russians took to the streets, their grandparents saw none of it on television. This fact made the protests all the more powerful—and encouraging—that so many bravely went against the authorities.

State-run media ignored the protests. They likely decided that if it’s not on TV for the masses, it didn’t occur. But this new generation doesn’t need TV. They didn’t even need the mainstays of social activism such as Facebook and Twitter to get the word out. Instead, a YouTube video posted by top Putin critic Aleksei Navalny spread through a variety of other social media tools and brought the crowds out; it caught authorities off guard. Prime Minister Dmitry Medvedev showed his utter cluelessness on Sunday by bragging on Instagram about what a lovely day it was to be skiing.

The Kremlin spends large sums on the “patriotic” education of youth and aspires to have an army of young and uneducated soldiers, but Russian youth showed that they are well-informed, capable of critical thought, and ready to insist on their rights. In interviews, many said their conscience wouldn’t allow them to stay home. Many activists fear that we’ve lost the battle for values among youth. This past Sunday proved that we have underestimated our young people.

I would have been in Moscow protesting, but instead I watched Sunday’s protests from my apartment in Washington, DC.

In December 2012, after Putin began cracking down after massive protests, I had to flee Russia for my political activism. On a train to Europe, I was sad to leave but optimistic that I wouldn’t be gone for long. I saw hundreds of thousands of fellow Russians protesting on Bolotnaya and Sakharov squares in Moscow and in many other Russian regions in 2011-2012. I was proud that Russians had the dignity to demand fair elections, and I believed the situation in my country would change for the better soon. Instead, there were years of repression and dozens of draconian laws criminalizing any kind of activism, putting dozens in jail. Hundreds of thousands of Russians emigrated from Russia, having lost hope for positive reforms.

In March 2014, Russia invaded Ukraine and annexed Crimea. Then opposition leader Boris Nemtsov was killed and Putin critic Vladimir Kara-Murza was poisoned twice. It seemed that I’d lost my country again. I lost it physically when I was forced to leave in December 2012, and I lost it morally when Russia invaded Ukraine two years later. I didn’t share the values of most Russians who praised Putin for his aggression in a neighboring country.

Like everyone else, I want to be proud of my country, but instead I find myself apologizing that I’m from Russia and assuring people that I’m against Putin’s regime. But pride for my country has returned after Sunday’s protests. We know Putin’s regime will respond to the surprise success of the rallies with harsh repression. However, something is changing in Russia; the generation raised by the strong hand of Soviet leaders and now Putin will soon be replaced by a generation that refuses to answer to corrupt and undemocratic leaders.

A new movement was born in Russia on Sunday, the generation of fourteen to twenty year olds, which was too young to remember the Bolotnaya protests. They didn’t care that rallies in most cities were not authorized, which usually frightens people off.

No, this protest wasn’t televised. It didn’t need to be. By Monday morning, a young generation woke up to a new country that they are creating for themselves. We should wish them Godspeed.

Natalia Arno is the president of the Free Russia Foundation in Washington, DC. She previously served as the International Republican Institute’s country director in Moscow, Russia.