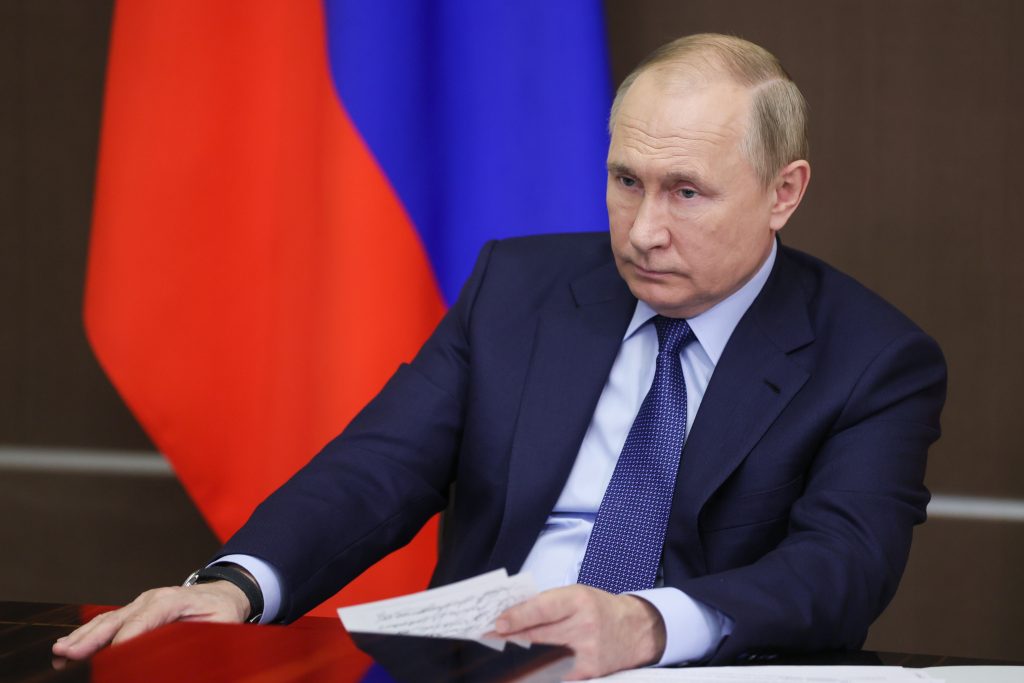 Events since 2014 have made it obvious that Russia will go to almost any lengths in order to re-establish control over Ukraine. Russian President Vladimir Putin’s obsession with Ukraine has already cost more than 14,000 lives and plunged the world into a new Cold War. He is now threatening to launch a major invasion that could spark the most devastating European conflict since World War II.

Putin’s fixation with all things Ukrainian is well documented. Despite the Kremlin’s official denials, his war in eastern Ukraine has been the world’s worst-kept secret since Kremlin forces first began seizing towns and cities across the region in spring 2014.

The Russian leader is also notorious for his frequent and often highly emotional public statements on the topic of Ukraine. This includes Putin’s remarkable July 2021 essay in which he openly questioned Ukrainian statehood and argued that “true sovereignty of Ukraine is possible only in partnership with Russia.”

While Putin’s ultimate goal is relatively clear, Russia is having difficulty achieving its aims. Moscow has used military force in Crimea and eastern Ukraine. It has sought to destabilize Ukraine from within via a range of disinformation campaigns and pro-Russian political projects. It has attempted to pressure President Zelenskyy into implementing a Russian interpretation of the Minsk Agreements which would undermine Ukrainian sovereignty.

None of these tactics has produced the desired result. On the contrary, Russia’s hostile actions have proved counter-productive, greatly boosting Ukrainian public support for Euro-Atlantic integration while strengthening the country’s resolve to geopolitically distance itself from the Kremlin. Clear majorities of Ukrainians now back the idea of joining the EU and NATO, while the alliance last year upgraded Ukraine to Enhanced Opportunities Partner status and has since reiterated its commitment to future Ukrainian NATO membership.

Faced with the failure of his Ukraine policies, it seems Putin has now decided to dramatically raise the stakes and threaten Ukraine with a large-scale conventional war. Since October 2021, reports have been mounting of a growing military build-up along Russia’s extensive land border with Ukraine. Russian units have been moved into positions to the north, east, and south of Ukraine in a manner that experts believe is entirely consistent with preparations for a major offensive.

At this stage, Russia’s actions appear designed to coerce the West into abandoning Ukraine. Much of this effort is focused explicitly on the United States, with the debate over a potential invasion predominantly taking place in the US information space. This points to a carefully constructed Russian influence operation targeting the American foreign policy community.

As a major supporter of Ukraine, the United States is central to the Kremlin’s thinking as it looks to settle the Ukrainian question. Many Russians have been encouraged by the Biden Administration’s recent steps such as the decision to allow the Nord Stream 2 pipeline to proceed. There is a growing consensus in Moscow that the White House emphasis on China creates opportunities for Russia to exploit.

The Kremlin now appears intend on presenting Washington with a choice between stepping back from Ukraine or witnessing the country’s violent subjugation by means of overwhelming military force. This is a false choice which ignores the realities that would confront any Russian invasion force if Putin does indeed issue the order to proceed with his offensive.

Today’s Ukraine is far from the failed state portrayed in Kremlin propaganda. It is an increasingly self-confident nation with a mature and battle-hardened civil society. Since gaining independence three decades ago, Ukrainians have embraced a European identity and grown increasingly used to viewing themselves as part of the wider democratic world. Twice in the past twenty years, they have taken to the streets in their millions to defend the country’s democratic values against domestic authoritarianism and foreign intervention.

Invading Ukraine will not provide Putin with the kind of “quick victorious war” many in Moscow are hoping for. The Ukrainian military is highly motivated and would be fighting on its own soil against a foreign invader. Unlike most of the Russian troops current massed along the border, virtually every single Ukrainian battalion and brigade has combat experience. Years of conflict with Russia have also produced a vast reserve of battle-hardened and highly trained veterans numbering in the hundreds of thousands.

While it is clear that Russia enjoys overwhelming military superiority in terms of both numbers and weaponry, any invasion force would inevitably suffer severe losses that Moscow would struggle to justify to the Russian public. Far from boosting Putin’s domestic ratings, such a conflict could rapidly undermine the stability of his entire regime.

After crossing the border, Russian occupation forces would face formidable opposition from the Ukrainian military along with irregular forces made up of veterans and volunteers, making effective administration impossible. Moscow’s military dominance in terms of aircraft and conventional weapons would be of limited use against the kind of domestic resistance Ukraine could muster.

Nor would Russian troops be welcomed by the Ukrainian civilian population. Moscow has already made this mistake once before seven years ago, when the Kremlin apparently fell into the trap of believing its own propaganda and was subsequently shocked when Ukrainian society mobilized in support of the country’s defense.

Ukrainian public opposition to Russian intervention has only hardened since the historic days of spring and summer 2014. Over the past seven-and-a-half years, the losses inflicted by Putin’s war have been felt throughout Ukrainian society. Meanwhile, the grim realities of the Russian occupation in eastern Ukraine have left few Ukrainians in any doubt over the devastating economic and social impact of a broader Kremlin offensive.

This is not a local issue. A major war in Ukraine would completely transform the European security climate with disastrous implications for the wider region. Millions of Ukrainian refugees would flood into neighboring EU countries. The Ukrainian economy would collapse, with a wide range of negative consequences for the European and global economies, including everything from food supply disruption to the loss of trade and investments.

It is also vital to understand that Russian ambitions do not end with Ukraine. This is a dangerous misconception that fails to grasp the true scope of modern Russian revisionism. In reality, Putin seeks to demolish the entire rules-based world order established in the decades following WWII and consolidated since the collapse of the USSR.

In its place, he dreams of a world divided into spheres of influence where major powers like Russia have a free hand to dictate to their weaker neighbors. Control over Ukraine is an important part of this vision, but it is only one element of a far more ambitious revisionist agenda.

If the West fails to stop Putin in Ukraine, Kremlin cyber-attacks and disinformation campaigns will increase, while Russian mercenaries and conventional forces will be deployed in ever greater numbers to trouble spots around the globe. Moscow will become bolder in the weaponization of energy supplies and will escalate its support for destabilizing political and social movements throughout the democratic world.

In order to avoid a major war in Ukraine, America and Europe must respond promptly and decisively to Putin’s current posturing. This reaction should include accelerated military support for Ukraine along with clear and unambiguous warnings about the West’s readiness to implement the harshest possible sanctions package.

With the available data pointing to a potential Russian invasion of Ukraine in the first few months of 2022, there is no time to create the necessary deterrence in terms fighter jets and air defense systems. However, there are a range of military steps that can be taken to enhance Ukraine’s ability to inflict unacceptable losses on invading Russian forces.

Meanwhile, it is vital that sanctions are developed in detail and announced in the coming weeks. The Russian economy is highly dependent on the West and vulnerable to sanctions. America is likely to take the lead in developing serious sanctions measures, but it is essential that the UK and leading EU nations including Germany and France also offer their unequivocal endorsement.

The world needs to understand that while Ukrainians are ready to defend their country against a large-scale Russian invasion, the costs of the ensuing conflict would be catastrophic in scale and global in character.

Putin’s menacing military build-up is intended to intimidate the international community, but it would be a tragic error to assume the Russian leader is merely bluffing. His obsession with Ukraine and his desire to reverse the verdict of 1991 mean a major war in Ukraine cannot be ruled out. Any indications of Western wavering will make an invasion far more likely.

This makes policies of prevention an urgent priority. Before it is too late, the West must demonstrate its resolve to stand with Ukraine and impose crushing costs on the Kremlin. With Russia’s current intentions ominous but unclear, readiness remains the best deterrent.

Andriy Zagorodnyuk is Chairman of the Centre for Defence Strategies. He previously served as Ukraine’s Minister of Defense (2019–2020) and head of the country’s MOD Reforms Project Office (2015–2018). Alexander Khara is a diplomat and expert in foreign affairs and security policy. He served as Deputy Director General for Foreign Affairs at the National Security and Defense Council (2008-2011) and advisor to Ukraine's Minister of Defense in 2020.

Russian MP Alexander Borodai's frank recent comments about Russia's responsibility for the war in Ukraine underline the current sense of impunity in Moscow and expose the absurdity of Russia's ongoing denials.