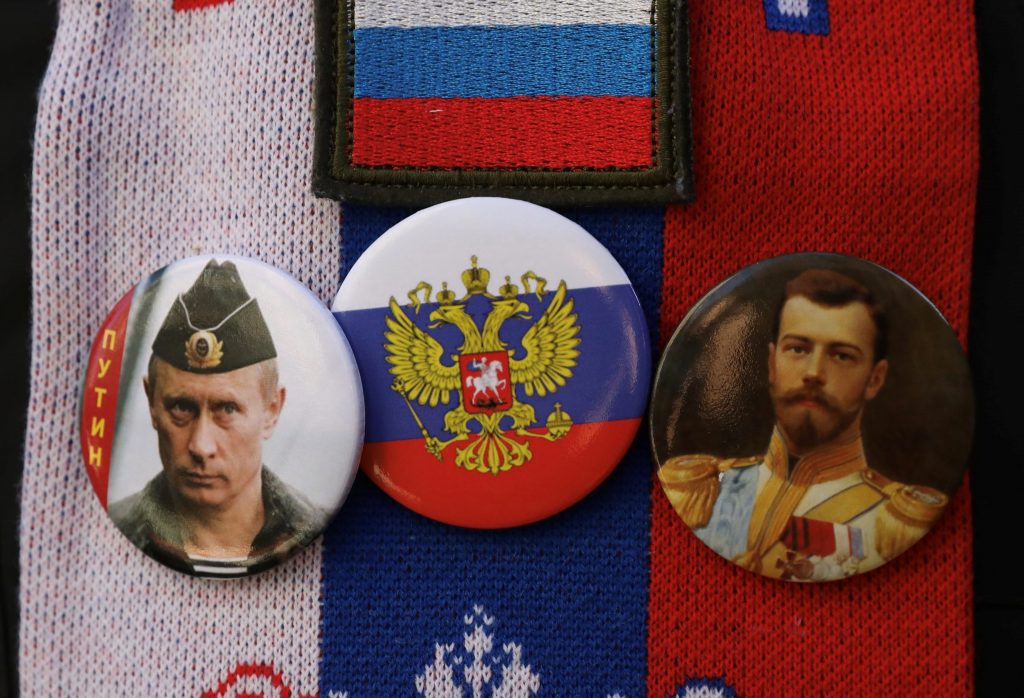 Since the onset of Russian aggression against Ukraine in spring 2014, much has been written about the innovative form of hybrid warfare favored by the Kremlin. But while certain aspects of Russia’s attack on Ukraine have indeed been novel, Moscow’s approach to the conflict also echoes a range of far more traditional tactics from the golden age of Russian imperialism and the era of Soviet expansionism.

“The spirit of partiality, disorder and civil war, which for so many years has shaken the Kingdom of Poland, the anarchy which there with each passing day increases, destroying the seriousness of regular government.” This is how Russian ruler Catherine the Great presented the threat to Russia in 1772 while seeking to justify the first partition of the Polish-Lithuanian Commonwealth.

When she annexed further lands west of Kyiv two decades later during subsequent stages of the partitions, this act of imperial expansion was explained as necessary due to the “feuds and disturbances that shook the Kingdom of Poland as a result of the overthrow of the old regime, carried out unilaterally and violently on the third of May 1791.” This Czarist era narrative immediately brings to mind modern Russia’s own attempts to justify its attack on Ukraine by referencing alleged coups in Kyiv.

Throughout the eighteenth century, Russian propaganda consistently emphasized the discrimination suffered by Orthodox believers in the Polish-Lithuanian Commonwealth, without adding that in the Russian Empire itself, Catholics enjoyed incomparably fewer rights. Unsurprisingly, such claims played a prominent role in efforts to defend the partitions on Poland. In other words, the Orthodox believers of eighteenth century imperial propaganda were the direct ancestors of the “Russian-speaking Ukrainians” whose alleged plight is now regularly championed by Putin and Lavrov.

Moreover, in order to justify the partitions, disinformation campaigns were developed to defame the Commonwealth in Western Europe and portray it as a “failed state.” The analogies with modern Russia’s extensive use of information warfare are painfully clear.

Recent British and American claims of alleged Russian plots to install a puppet government in Ukraine are also very much in line with a long tradition of similar scheming. Twice in the eighteenth century, imperial Russia succeeded in imposing its puppet rulers on Poland.

This trend was to become particularly prominent in the twentieth century as the Red Army expanded across Eastern and Central Europe. More than seventy years before Putin would deny sending Russian troops to Crimea and eastern Ukraine, Moscow was attempting to disguise its role in the Winter War against Finland by claiming to be providing fraternal assistance to a puppet regime set up for the purpose by the Soviets.

Following military occupation and the establishment of puppet administrations in 1940, all three Baltic states staged fig leaf referendums before “requesting” to join the USSR. The parallels with the 2014 Russian takeover of Ukraine’s Crimean peninsula are immediately obvious.

Similarly, the Soviet occupation of Poland during the latter stages of WWII led to the installation of a puppet regime. Brought to power on the bayonets of the Red Army in 1944, the Polish Committee of National Liberation consisted overwhelmingly of unknown careerists and Soviet agents. It would go on to rule the country for more than four decades.

It has long been acknowledged that the current Kremlin authorities are obsessed with the past to a degree that is exceptional in modern Europe. What many have failed to recognize is the extent to which Putin’s playbook in Ukraine borrows directly from some of the most infamous episodes in Russian history.

From the framing of expansionist policies as liberation campaigns to the staging of phony referendums and the installation of Russian puppets, there is much about Putin’s war in Ukraine that is anything but original. Elements of the same policies can be identified in earlier examples of Russian aggression stretching back centuries and involving at least five current European Union member states.

There are lessons here for today’s Western leaders to contemplate. Widespread acceptance of the eighteenth century partitions of Poland helped set the stage for decades of tension and regional instability. Likewise, the fateful decision of the Western allies at Yalta in early 1945 to recognize a Soviet sphere of influence in Central Europe set the stage for the entire Cold War.

Conversely, the USSR’s prompt expulsion from the League of Nations in 1939 over the Soviet invasion of Finland and Western plans to send military support to the Finns helped convince the Kremlin to end the war and seek a compromise.

As the international community looks to deter Putin from unleashing what could soon become the largest European conflict since WWII, earlier successes in addressing the challenges of Russian imperialism may offer clues as to the best way forward. A brief look at Russia’s past record also provides a timely reminder that today’s hybrid warfare may be far more traditional than it at first appears.

Łukasz Adamski is an historian and foreign policy expert specialising in Russia and Ukraine. He is Deputy Director of the Centre for Polish-Russian Dialogue and Understanding, a Polish public institution established by act of parliament.