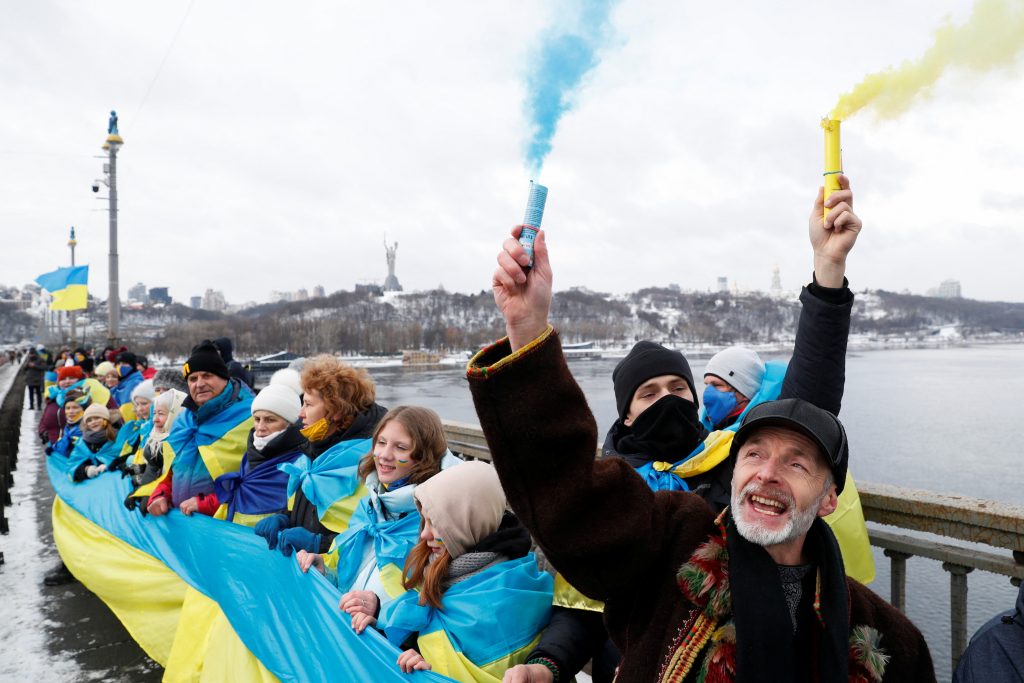 As I watch the never-ending coverage of the current Russian military build-up around Ukraine, I am struck by the fact that, as presented by the international media, the situation seems to have little to do with Ukrainians. Ukraine is clearly at the heart of the story, but there is almost no discussion whatsoever about what the Ukrainians themselves actually want.

Although the mantra “nothing about Ukraine without Ukraine” is repeated religiously by Western diplomats, the agency of Ukrainians, demonstrated so prominently during the 2014 Revolution of Dignity and the 2004 Orange Revolution, is now largely sidelined or ignored.

In the context of the current crisis, it would seem that the opinions of more than 40 million Ukrainians simply don’t matter. Their territory certainly matters, because it is seen as the object of Great Power competition, but beyond the steady flow of human interest stories in the media designed to arouse pity for the victims of actual and potential war, the voice of ordinary Ukrainians remains unheard. While there is endless speculation over what Vladimir Putin may want or how the West should respond to the threat of a major European war, Ukraine has been reduced to the status of bystander in its own national drama.

This is folly. Not only is it an obvious injustice, but it also prevents international audiences from appreciating the true nature of the present geopolitical confrontation. After all, Russian aggression is itself a reaction to Ukrainian agency. Putin’s war only makes sense when viewed in the context of Ukraine’s own efforts to embrace a democratic future as part of the Euro-Atlantic community, while the present invasion threat is a direct response to eight long years of Ukrainian defiance. In other words, a Ukrainian perspective is absolutely essential to any meaningful understanding of the current crisis.

The first key point to emphasize is that Russian aggression against Ukraine is nothing new. While Western audiences may be shocked by Putin’s threats and saber-rattling, Ukrainians are not. They have been living with war for eight years and have seen around 14,000 countrymen lose their lives. Ukrainians across the country have welcomed more than a million people into their communities who have been uprooted by Putin’s war, integrating them into what is a sometimes chaotic but fundamentally free and tolerant society.

Since 2014, Ukraine has passed the ultimate statehood test. Due to the Russian seizure of Crimea and subsequent invasion of eastern Ukraine, Moscow now occupies around seven percent of Ukrainian lands. Putin makes no secret of his ambitions to subjugate the entire country, while his regime works tirelessly to destabilize and divide. The fact that so much of Ukraine has remained unified and intact despite Russia’s insidious plans is testament to the valor of the Ukrainian Armed Forces and volunteer defenders, and to the fortitude of the entire nation.

Ukrainians understand that Russian aggression is a long-term phenomenon. The current crisis is not about NATO expansion, as Ukraine’s membership of the alliance is not on the agenda and NATO activity in Ukraine remains extremely limited. In reality, the NATO issue is a smokescreen designed by the Kremlin to bring the US to the negotiating table and hopefully to induce Washington to accept Russian control over Ukraine. It is an attempt to legitimize Putin’s dream of recreating the Russian Empire. At this point it looks as though the US, UK and Canada are not falling for the ruse, although the same cannot be said for Germany and France.

Regardless of short-term tactical diplomatic victories or losses, the strategic focus remains the same: Russia presents an existential threat to Ukraine that is not going to disappear any time soon. As long as Ukraine exists as a democratic state that is not directly controlled by Moscow, the country will be constantly under threat. For the foreseeable future, this will be the reality of life in Ukraine.

International audiences need to understand that Russia’s designs on Ukraine will not be deterred by the prospect of economic sanctions alone. The Kremlin is motivated by ideology and the dream of restoring Russia’s greatness. This historic mission trumps any potential economic hardship that may be caused to Russia’s population or leadership by sanctions.

Ukrainians understand this. They also understand that only Ukrainians will defend Ukraine. There is considerable gratitude for all military assistance provided by Ukraine’s international partners and for the diplomatic efforts to restrain Russia and stall Moscow’s invasion, but there is also recognition that continued conflict with Russia is inevitable. Putin will only be deterred by the prospect of losing.

As far as the Kremlin leader is concerned, Ukraine cannot exist as a separate country because Ukrainians and Russians are “one people.” This narrative is deeply ingrained throughout the Russian population. The price to be paid for realizing this dream is not measurable in economic terms. Victory must be achieved regardless of cost.

For the moment, decisions regarding Ukraine’s future are seemingly being made in Moscow, Geneva, Brussels and Washington. In current conditions, Ukrainians have little say, but that is a temporary pretense. Ultimately, the future of Ukraine will be decided by Ukrainians.

Ukrainians have demonstrated over the past eight years that they are not prepared to cede their independence. At the same time, Vladimir Putin will never abandon his vision of a reconstituted Russian Empire that requires Ukraine as its centerpiece. In his eyes, Ukraine’s very existence as an independent European democracy is an intolerable provocation.

The international community now needs to recognize that there is no convenient middle ground between the Russian and Ukrainian positions. In the words of Israel’s Kyiv-born former Prime Minister Golda Meir, “To be or not to be is not a question of compromise.”

Mychailo Wynnyckyj is an Associate Professor at the Kyiv-Mohyla Academy.

Image: People form a human chain along a bridge across the Dnipro River as they celebrate Ukraine's Day of Unity in Kyiv. January 22, 2022. (REUTERS/Valentyn Ogirenko)