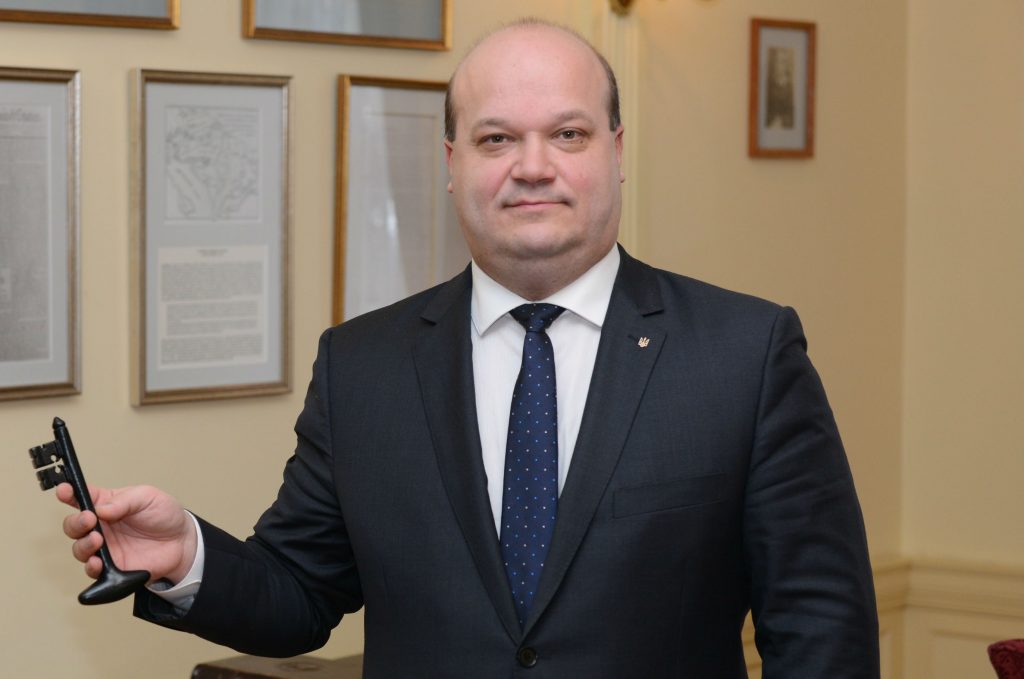 Valeriy Chaly, Ukraine’s new ambassador in Washington, sees the United States as his country’s “main strategic partner” and says he wants to use that bilateral relationship “to resolve the crisis created by Russia in Eastern Europe and find the best model of security in this part of the world.”

Chaly, 45, presented his White House credentials on August 3, 2015. Born and raised in Vinnytsia—a historic city southwest of Kyiv that serves as headquarters of Ukraine’s Air Force—Chaly is a close friend of Ukrainian President Petro Poroshenko, with whom the ambassador speaks regularly.

In April 2010, Chaly quit his job as deputy foreign minister to protest the policies of then-President Viktor Yanokovych. He returned to the Razumkov Centre, the Kyiv-based think tank where he had spent three years as deputy director-general before joining the government—and now, Ukraine’s top diplomat in the United States.

The new ambassador was interviewed at his embassy’s Georgetown mansion.

Q: What makes you particularly qualified to represent Ukraine in the United States?

Chaly: Unlike previous ambassadors, I was the chief foreign policy adviser to the President of Ukraine. I’ve participated in all the negotiations with Russia and have met [Russian President Vladimir] Putin many times.

Q: What is your impression of him?

Chaly: My understanding is that Putin changed significantly since 1997, when he was simply the head of a department in a presidential administration at the Kremlin. He sees the breakup of the Soviet Union as a great historical mistake. He wants to try to restore the thinking of the Cold War and be an equal player to the President of the United States, but it’s a crazy idea. Russia’s GDP is that of Texas. Last year it was that of the Netherlands. Apple’s stock is worth more than twice as much as all Russian companies combined.

Q: How do you view the current state of relations between Kyiv and Washington?

Chaly: Maintaining trust is the basis for our strategic partnership with the United States. We want to combine our efforts to resolve the crisis created by Russia in Eastern Europe, to restore the international order destroyed by Russia, and to find the best model of security in this part of the world. We are now satisfied with the level of cooperation and bipartisan support from Congress, and from the administration. We see the United States as our main partner, together with the EU, and we appreciate US economic support.

Q: What would it take for Crimea to return to Ukrainian sovereignty?

Chaly: If Ukraine proposes the best model for development, they will push out Russian military forces. It’s a real challenge, and a threat to international order, but I believe that Crimea will someday be back in Ukrainian hands. It may be even less difficult with Crimea than with the Donbas, simply because they didn’t kill people in this occupation. It only takes time. But we have more than one million IDPs [internally displaced persons]. Most of them are Crimean Tatars, who were simply pushed out of their native territory. It’s a violation of human rights.

Q: Is Ukraine in a better position to defend itself than when fighting began in 2014?

Chaly: We simply did not have military forces last year. We had only 6,000 soldiers and officers ready to fight. Now we have one of the most effective and experienced armies in Eastern Europe, with combat experience.

Q: Two years ago, 16 percent of Ukrainians supported NATO membership; polls now say it’s 60 percent. Likewise, the proportion of Ukrainians backing entry into the EU has risen from 50 to 55 percent. Do you still see these as likely goals for your country?

Chaly: The Ukrainian people have chosen the path of our Western neighbors, and now we are closer to Poland and the Czech Republic than to Russia. That was one of the preconditions of the 2014 Revolution of Dignity. I was an active participant in this revolution, and I was every day at the Maidan, including when they began killing my friends. So for me, it’s not only words.

Q: Ukraine’s GDP is expected to drop by 11.5 percent this year, and the United Nations says about 80 percent of Ukrainians now live below the poverty line. What is your government doing to jump-start the economy?

Chaly: People understand that we are, in effect, in a state of war. We’ve spent 90 billion hryvnia [more than $3.9 billion] on defense. Two years ago, we bought 32 billion cubic meters of gas from Russia. This year, it’ll be four billion, and within five years, maybe it’ll be zero. So we must diversify our supply from Western Europe.

Q: Ukraine ranked 142nd out of 175 countries on Transparency International’s latest Corruption Perceptions Index, with one of the worst scores of any of the fifteen ex-Soviet republics. Why does corruption seem to be so endemic in Ukraine?

Chaly: Since the Soviet Union’s breakup, Ukraine has been led by oligarchs, with very close ties between politicians and businessmen. Now, for the first time in our history, civil society rose up to destroy this system. Corruption exists in all countries, but in Ukraine at a very high level—and you can’t simply change this if you don’t reform the judicial and procurement system. These reforms should all be implemented at the same time.

Q: What about efforts to decentralize government and privatize state-owned entities?

Chaly: Decentralization is mostly about local authorities taking responsibility. Before that, 90 percent of the money was coming back to the capital, with bureaucrats in Kyiv making decisions. That’s a basis for corruption. Now, with the political will of the President of Ukraine, he’s giving not only responsibility but also the mechanism of control to the local level. One of my priorities as ambassador is to invite investors with strategic thinking to Ukraine. Even now in this difficult situation, we have many proposals from US investors for the privatization of state-owned companies.

Chaly: I’m not sure I’d want to shake his hand, but I’m ready to go on a talk show and defend our position—though definitely not in a private meeting. It’s nothing personal. I had many friends in Russia before the war, but after they attacked my country, things changed. These days Russia’s propaganda machine has significant financial resources; they spend hundreds of millions of dollars only in the US, including the 100 journalists at Russia Today. So we must keep the focus on Ukraine and spread the truth.

Larry Luxner is news editor of The Washington Diplomat, which features Ambassador Chaly on the cover of its November 2015 issue.

Image: Valeriy Chaly, Ukraine’s Ambassador to the United States, displays a replica of the famous Bastille key presented to the Ukrainian government during a ceremony to inaugurate the embassy’s Washington Room. Credit: Lawrence Ruggeri