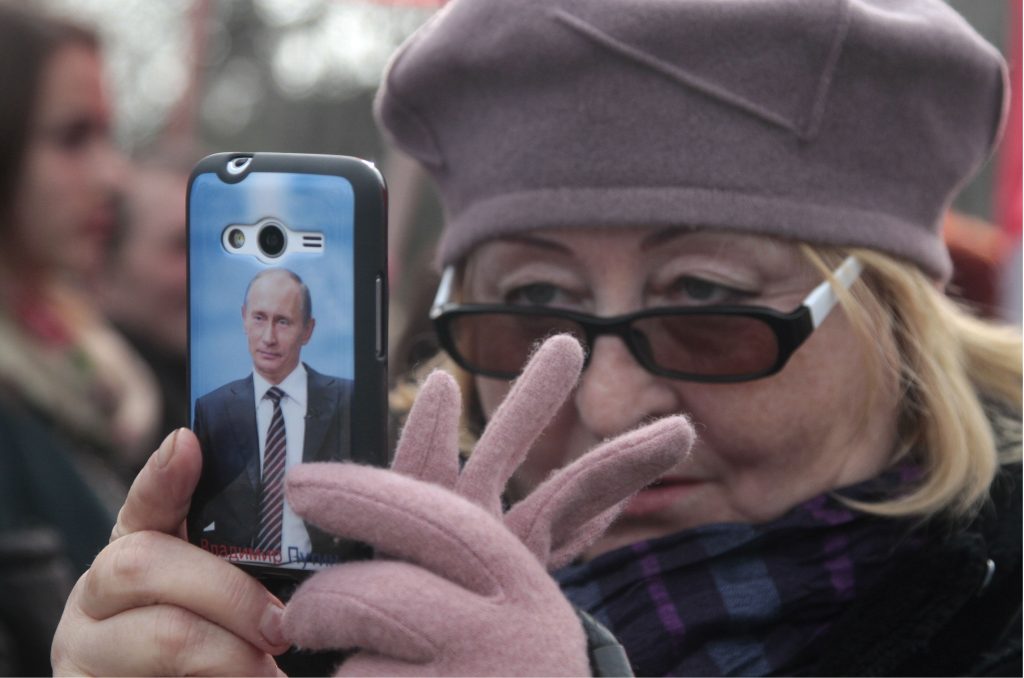 Vladimir Putin’s decade long media campaigns turned Russians against Ukrainians and the Ukrainian state prior to his 2014 annexation of Crimea. The divorce between Russia and Ukraine which began with the disintegration of the USSR gained momentum after the 2004 Orange Revolution.

Putin’s authoritarian and great power nationalistic regime fanned ethnic Russian nationalism, turning Russians against both the Ukraine state and Ukrainians as a people. Meanwhile, Putin’s repeated claim that Ukrainians and Russians are “one people” left no room for a Ukrainian identity other than that of “little Russians” in his Eurasian Union. Putin’s total control of the Russian media mobilized anti-Ukrainian hysteria among Russians in the decade leading up to the Kremlin’s 2014 aggression.

In contrast, Ukraine’s three presidents since the 2004 Orange Revolution never organized anti-Russian media campaigns. Ukrainians throughout this period have never held negative views of Russians and only because of Putin’s aggression have Ukrainian attitudes turned against the Russian state and its leaders. Ukrainian citizens—unlike Russians—distinguish between Russian leaders and state institutions, which three-quarters of them abhor, and the Russian people, whom a majority of Ukrainians continue to view positively.

Divergent attitudes of Russians and Ukrainians to one another is clearly visible in opinion polls. In 2008-2010, during the last three years of Ukrainian President Viktor Yushchenko’s term when relations were tense following Russia’s invasion of Georgia, Ukrainian attempts to receive a Membership Action Plan at NATO’s Bucharest summit, and an ongoing Russia-Ukraine gas crisis, polls did not show a significant worsening of Ukrainian views of Russia. Between 88 and 93 percent of Ukrainians held positive views of Russians, with only 6-9 percent espousing negative views.

In contrast, during the same period, the percentage of Russians holding positive views of Ukrainians plummeted from 55 to 34 percent. Ukrainophobia in the Russian media peaked during the second half of 2009, when Ukraine expelled Russian diplomats for promoting separatism and Russian nationalist extremism and President Dmitri Medvedev responded with a threatening open letter to then President Viktor Yushchenko.

In 2010, with the election of Viktor Yanukovych, Russian attitudes toward Ukraine dramatically improved, doubling to a 70 percent approval rating. Yanukovych signed the Kharkiv Accords extending the Black Sea Fleet basing agreement to 2042, and Ukraine adopted a ‘non-bloc’ foreign policy and changed its approach to national identity questions such as the Holodomor.

Ukrainian attitudes toward Russia were stable until 2013, with positive attitudes ranging from 65 percent in the west to 93 percent in the east. These figures belied allegations of a Russophobic western Ukraine; only twenty percent of the public there held negative views of Russians.

Not surprisingly, the major shift in opinion took place after 2014. A major gulf in attitudes rose regarding Crimea, whose annexation was supported by 87 percent of Russians and opposed by 69 percent of Ukrainians. In Russia, both pro-Putin supporters and anti-Putin oppositionists like Alexei Navalny and Mikhail Khodorkovsky backed the annexation of Crimea. Seventy-nine percent of Russians linked that action to the revival of Russia as a great power and a return to Russia’s rightful dominance of the former Soviet Union.

Positive Russian attitudes toward Ukraine once again dramatically collapsed during the Euromaidan, which was portrayed in massive state-sponsored information campaigns as a Western-backed coup bringing Russophobes and fascists to power. A just-released poll by Russia’s Levada Center shows that Russians think the most hostile countries are the United States, followed by Ukraine, Germany, Latvia, and Lithuania. Russians believe the official propaganda that there was a “democratic referendum” in Crimea, that Ukrainians shot down Malaysia Airlines Flight 17, that there is a civil war in Ukraine, and that there are no Russian troops in eastern Ukraine. Two-thirds of Ukrainians, but only a quarter of Russians, understand the conflict as a Russian-Ukrainian war.

Beginning in spring 2014, Ukrainian attitudes toward Russia begin to massively change—not because of any state-directed propaganda campaigns but in response to Putin’s military aggression. By mid-2014, positive views of Russia had fallen to 52 percent. Iryna Bekeshkina of Democratic Initiatives has written that “for the majority of [Ukrainian] citizens, Russia has turned into an enemy.” Putin’s aggression has integrated Ukrainian and Russian speakers by bringing the views of eastern and southern Ukrainians closer to those of central Ukrainians.

Ukrainians held a positive view of the Russian people throughout this period and only turned against the Russian state and its president in 2014 in response to Putin’s aggression. As Bekeshkina has written, “In getting Crimea, Putin has lost Ukraine.” Putin’s war will only end when this fact is finally realized in Moscow.

Image: A portrait of Russian President Vladimir Putin is seen on a cover of a woman's phone as she takes pictures during celebrations of the Russian national holiday - Defender of the Fatherland Day in Sevastopol, Crimea, February 23, 2016.