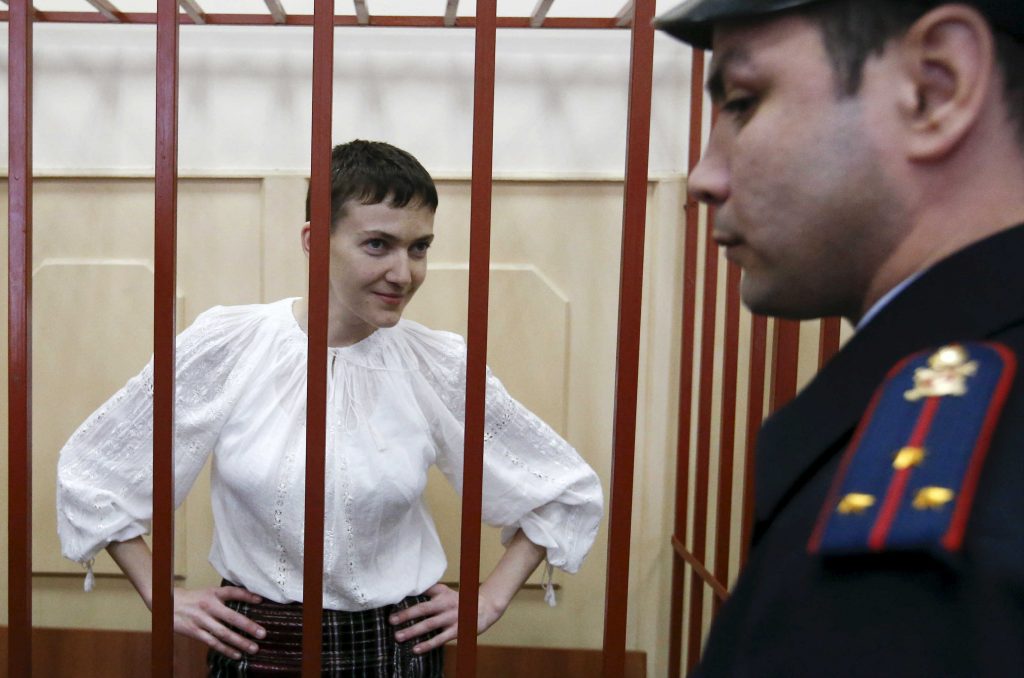 March 5 marked the sixty-third anniversary of Joseph Stalin’s death. A friend texted me a photo of a poster from a Moscow bus shelter, a death mask of the Soviet dictator, captioned with the words: “That one died, this one will, too,” presumably a reference to Russia’s current ruler Vladimir Putin.

There’s a certain sad Russian resignation in this; yet some Russians keeping pushing for human rights and political change now.

Russian human rights activists are demanding authorities release Nadiya Savchenko, the Ukrainian pilot who has been behind bars in a Russian prison since Moscow-backed separatists captured her in eastern Ukraine in June 2014. After prosecutors called for a 23-year prison term on March 3, Savchenko began a dry hunger strike, refusing food and liquids.

For Ukrainians, the 34-year-old Savchenko—who was elected in absentia to Ukraine’s parliament in November 2014—has become a symbol of hope and defiance against Russian aggression. She is accused of deliberately targeting two Russian journalists who died in fighting between Ukrainian forces and armed pro-Russian militants. There’s no evidence that Savchenko did any such thing. In fact, Savchenko was captured an hour before the mortar attack that killed journalists Igor Kornelyuk and Anton Voloshin, a fact Savchenko’s cell phone records confirm.

But Putin’s judicial system is inspired by Soviet history. Last year, a Russian court sentenced a pro-Ukrainian film director from Crimea to twenty years in prison, with court proceedings described by Amnesty International as “redolent of Stalinist-era show trials.”

It’s time we look to history, too. It was brave individuals like Savchenko who, with western support and critical gestures of solidarity, helped tear down the tyranny the Kremlin and its allies appear so determined to resurrect.

Jerzy Popiełuszko was a Polish priest associated with the Solidarity movement in the 1980s. In October 1984, three agents of the Polish security service—a counterpart to Putin’s KGB—pretending to have car trouble near a town in central Poland, flagged Popiełuszko down. After beating the cleric and cramming his battered body into the trunk, they drove him to a nearby reservoir where they heaved his limp body, with a heavy stone bound to his feet, into the water. More than 250,000 people attended Father Popiełuszko’s funeral on November 4, 1984. Four years later, British Prime Minister Margaret Thatcher unnerved Communist authorities and inspired millions of Poles when she insisted on laying flowers at Popiełuszko’s grave during a visit to Poland.

Monica Lovinescu was a Romanian essayist and literary critic whose commentaries on culture for American-funded Radio Free Europe so infuriated Nicolae Ceausescu that the Romanian dictator in November 1977 dispatched agents, who beat Lovinescu into a coma in the courtyard of her Paris apartment. Lovinescu recovered, and returned to her microphone. When she died in 2008, there were calls in the Romanian parliament for a state funeral and a petition to name a boulevard after her.

Natan Sharansky was born in what is today the self-declared People’s Republic of Donetsk in eastern Ukraine. He started as a mathematician and chess prodigy; at the time of his arrest in 1977, Sharansky was a human rights activist and translator for dissident and nuclear physicist Andrei Sakharov. During nine years in a Soviet prison, Sharansky suffered torture and periods of solitary confinement. He was freed in a spy exchange at the Glienecke bridge in Berlin in 1986, later to report his cell block’s outburst of joy when prisoners had learned of Ronald Reagan’s “evil empire” speech.

Sharansky, who had been offered a deal before his imprisonment, told his sentencing court, “I am happy…I never compromised my soul.”

Savchenko was about to give her final statement on March 3, when judges interrupted the proceedings. She was prepared to call Putin “a tyrant, with imperial habits,” and wanted to remind of the European appeasement and American indecisiveness that once abetted the rise of Nazi Germany (Savchenko’s unspoken words have been released by her sister). She was ready to conclude, by saying of her Ukrainian countrymen—who she rightly predicted would stand vigil during her hunger strike—that in time “ordinary, honest, and decent Russians in nearby houses will start bringing them hot tea, sandwiches, and warm clothes, because they understand that tomorrow their children could be in my place.”

With her own uncompromised soul, a courageous Ukrainian has found her voice. Russians may start to find theirs. We must rediscover ours as well.

Jeffrey Gedmin is a nonresident fellow at the Atlantic Council. He’s also a senior fellow at Georgetown University’s School of Foreign Service and senior advisor at Blue Star Strategies.

Image: Ukrainian military pilot Nadiya Savchenko stands inside a defendants' cage as she attends a court hearing in Moscow April 17, 2015. Pro-Russian separatists battling Kyiv's forces captured Savchenko last June and handed her over to Moscow, where she is being held on charges of aiding the killing of two Russian journalists in eastern Ukraine. REUTERS/Maxim Zmeyev