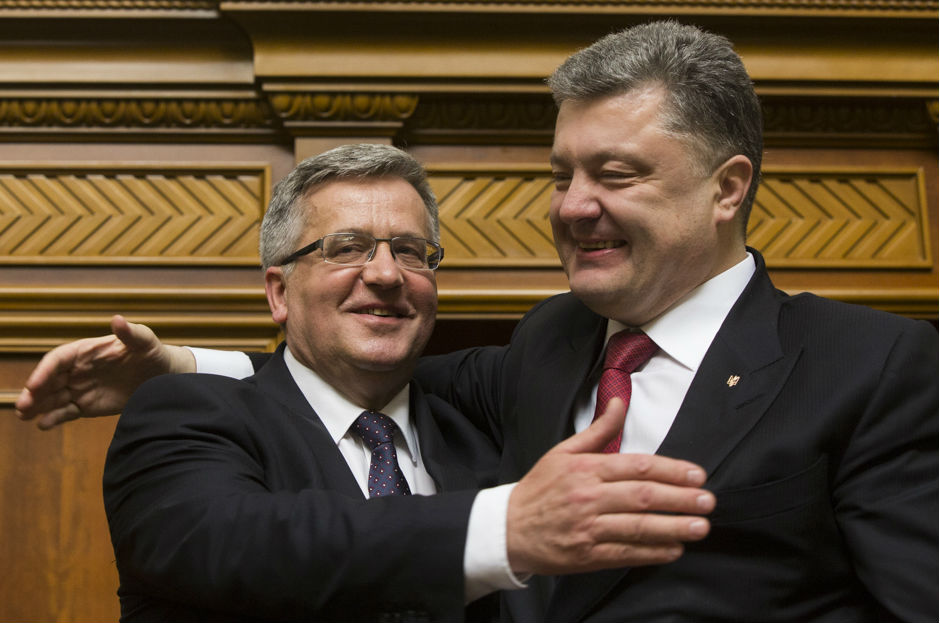 When the Soviet Union crumbled in 1991, both Poland and Ukraine were poor. Since then, the Polish economy has boomed, while Ukrainians are poorer than they were twenty-four years ago.

Poland got its reforms right in the 1990s, and now plays a significant role in Ukraine’s reform process. This is evident in the close relations between both country’s leaders, the joint plenary session between both parliaments in January 2015, and support from Polish society. But Warsaw’s role as Ukraine’s advocate in the European Union is even more appreciated.

Since the Euromaidan ejected Ukrainian President Viktor Yanukovych from power, Poland has backed Ukraine’s transformation. During his December 2014 visit to Kyiv, Polish President Bronisław Komorowski announced that “Poland will support Ukraine in the implementation of internal reforms, especially the reform of local government.”

Poland has led EU support of Ukraine’s democratization both bilaterally and at the EU level. In Brussels, Poland lobbied for €55 million in EU funds to support Ukraine’s decentralization reform and regional policies. At the bilateral level, Poland can draw on its experience by lending experts and arranging cooperation among government agencies. The Polish Ministry of Foreign Affairs and the Solidarity Fund support nongovernmental organizations in Ukraine. Ministry spokesman Jan Hofmokl is optimistic about Polish-Ukrainian cooperation and says the Kyiv government is committed “to genuine change.”

Twenty-five years ago, when Poland became the first Soviet satellite to hold partially free elections, it was still a centralized state with few people who knew how to restore power to local communities and meet public demand. Today, Poland, with its sixteen regions, 379 counties, and 2,479 municipalities—all with their own functioning governments—is a model for Ukraine to emulate, without introducing a federal system of governance.

Polish MP Marcin Święcicki is leading decentralization efforts at the request of Volodymyr Groysman, who until 2014 was both mayor of the west-central Ukrainian city of Vinnetysa as well as Ukraine’s Minister of Regional Development, Construction, and Communal Living.

Swiecicki thinks Ukraine today is in a better position than Poland was in 1989 because Ukraine has experience with local government and Poland didn’t, “except for the prewar experience, of course,” he said in an interview with Radio Free Europe/Radio Liberty. “But that was more than forty years earlier, so there weren’t many people who remembered it. There were maybe three specialists on local self-government in Poland.”

Decentralization will energize Ukraine’s economy and increase citizen participation at the regional level, Ilona Sologoub of the Kyiv School of Economics has shown. The proposed reforms would transfer 40 percent of personal income taxes into local budgets, and mayors and city councils would be given more latitude in how to use those funds. According to Groysman, now chair of the Verkhovna Rada, Ukraine’s proposed decentralization reforms borrow heavily from the Polish experience, which has led to “good practical results.”

But decentralization reform is stuck, even though it would clearly benefit every region of Ukraine. The government hasn’t clearly explained what it actually means, and ongoing fighting in eastern Ukraine is a distraction. Consequently many Ukrainians perceive it as their country’s federalization—a demand the Russian-backed separatists have made over and over—and therefore want nothing to do with it. Meanwhile, Ukraine is getting strong support from Polish NGOs.

“Poland is Ukraine’s gateway to the EU,” said Bartosz Kramek, Chair of the Open Dialogue Foundation, adding that Poland’s experience is the most suitable for Ukraine to emulate.

E-governance is another area where Ukraine can learn from Poland and its neighbors.

Michał Boni, a member of the European People’s Party and a Deputy to the European Parliament, has been working with the Ukrainian government on e-governance reform, including “Strategy 2030,” a long-term program to improve the functioning of public administration. According to an EU survey, Poland ranks twelfth among the EU’s twenty-eight member states in e-governance.

While authorities in Warsaw have made huge strides in online data accessibility and services, local administrations still struggle with a backlog of paperwork. Still, Poland’s success at the federal level could serve an example to Ukraine, since e-governance can improve communication between authorities and citizens, enable entrepreneurs to register their business quickly, and give citizens better access to public information. Boni has urged the EU to grant Ukraine visa-free access as well.

Oksana Khomei is a graduate of Warsaw’s College of Europe. Her master’s thesis was on “The Association Agreement between the European Union and Ukraine and the creation of a Deep and Comprehensive Free Trade Area (DCFTA).”