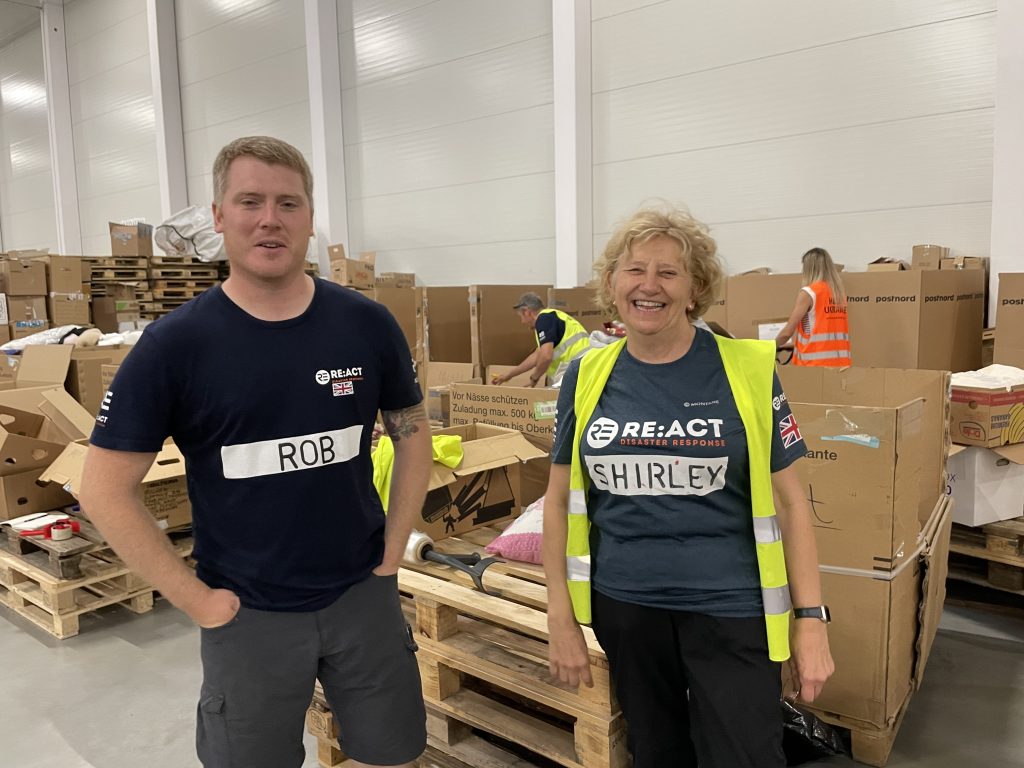 Balloons and birthday cake may perhaps be the last thing one expects when they imagine a humanitarian donation center for Ukrainian refugees. But at the Help Ukraine Center in Lublin, Poland, volunteers presented not one but two birthday cakes to mark one volunteer’s birthday on a recent sleepy Monday afternoon.

A collection of Ukrainian volunteers and internationals sort donations from European Union countries into piles. From the 4,000 square foot warehouse in Poland’s ninth largest city, trucks take the wrapped pallets to Lviv in western Ukraine for distribution across the war-torn country.

Help Ukraine Center, the brainchild of Ukrainian businessman Andrey Stavnitser and friends, opened a few days after Russia invaded Ukraine in February. Stavnitser works with Rozetka, the Ukrainian equivalent of Amazon, and Nova Poshta, the country’s version of DHL, to deliver packages to specific addresses free of charge or to deliver donated humanitarian aid to Ukrainians in need.

One slow day in June, four small children of volunteers weave in and out of wrapped pallets, alternating between a game of tag and swiping a handful of cookies when the watchful eyes of the women who run the Help Center are looking away.

In “Little Shanghai,” as the first section of the warehouse is known, female volunteers create personalized hygiene boxes for Ukrainian women. The Help Center sent specially prepared boxes with letters plus comfort items for victims of rape in Irpin.

In “Big Shanghai,” a new influx of volunteers from the British first responder organization RE:ACT has just arrived, sorting bedding and towels. They are mostly retirees, but no one can keep pace with them. A short woman who works silently and diligently catches my eye. Tamara turned up at the Help Center in a bathrobe from Mariupol, the largest of the many Ukrainian cities obliterated by Vladimir Putin’s invasion force. The Help Center outfitted her with clothing. She now comes every day to help sort aid packages.

The soundtrack is a mix of duct tape, determination, laughter and light rock.

“They were so busy they couldn’t keep up [in March],” says Colton Smith, a recent graduate of UC Santa Cruz who quit his job and moved to Poland to help. Smith says compassion fatigue is real and visible at the warehouse.

Donations are down 80 percent since the Center opened but the needs of Ukrainians are only increasing. The UNDP estimates that 9 of 10 Ukrainians will be in poverty by the end of the year if the war doesn’t stop. In February, 15 trucks came every day. Now only two to three trucks turn up.

Part of the problem is simple logistics. “We can’t plan our work,” says Olga Rudnieva, the ultra-efficient director of Help Ukraine Center. At first, people would drive the goods in for free, then they wanted fuel covered, and now it costs EUR 3,000 for a truck. “Drivers hate Poland,” she comments. The queues are impossibly long, sometimes stretching for five days.

The Help Center needs to borrow or buy a 20-ton truck for around EUR 20,000 to step up its deliveries. Approximately 100 pallets sit and await delivery. “Those shouldn’t be here,” Olga says.

The Help Center is one of the largest NGOs in Poland for Ukrainians and has immediate needs.

The long-time Ukrainian cook at the Help Center has to leave. Ukrainians are famous for their hospitality, and the Help Center is a small microcosm of Ukraine. Cookies, coffee and biscuits cover two large tables for volunteers. In the improvised “kitchen,” two women make vats of borscht and rolls to feed the 23 volunteers at the warehouse.

The Help Center also requests generators for hospitals, simple canned food like tuna, non-perishable food like pasta and beans that can be cooked quickly, and energy bars.

“One of our biggest problems is that volunteers leave,” Rudnieva says. Most volunteers come for a few weeks and some for a few months, all on their own nickel. While hugely appreciated, a Michelin star chef who was between jobs was the only forklift driver in the warehouse and had to teach his replacement how to drive over FaceTime.

Rudnieva has bigger problems. She worries that the world is moving on. Ukraine no longer makes the front pages of newspapers or commands the media attention that it once did. “People have to understand that the war is not over. We don’t want to make headlines with another Bucha or Irpin,” Rudnieva says with a grimace.

Before I dash out into the driving rain and head back to my hotel, Lasha Shikhashvili, an ethnic Georgian but longtime resident of Kyiv and father of three, wants to talk. He left four days before the war started and comes to the Help Center because “mentally it helps.”

“All of this war will come to peaceful life,” predicts Shikhashvili, who lived through war in Georgia in the 90s. He worries about the long-term effects of the war including domestic violence, suicide and violence in society, and urges donors to focus on mental health.

Help Ukraine Center also gave birth to new initiatives. The special alchemy between Rudnieva, the director, and Stavnitser, the CEO and initiator of the warehouse, is apparent.

Stavnitser and Rudnieva have no time for endless working group meetings about Ukraine’s eventual reconstruction or posturing for a big job once the war is over. They are impatient and ruthlessly focused on results. They see a problem they can fix, break it down, and attack it.

One example is the support being offered to the many women serving in the Ukrainian armed forces. Women soldiers in the Ukrainian army have long complained that uniforms do not fit. They are still issued with men’s underwear and the army’s large backpacks give them back pain. Gynecologists weren’t available on the frontlines for years.

Stavnitser, Rudnieva and other volunteers are revamping women’s uniforms. On Rudnieva’s iPhone she shows me attractive military green sports bras that will soon be produced in Ukraine. She is also working to get medicine to combat yeast and bladder infections for women in the trenches, which are the most common problems female soldiers face.

Stavnitser recently flew to Turkey and found smaller uniforms that fit women. He also purchased 500 ultralight Kevlar vests that are only 2.6 kilos and more comfortable for women.

This is how Ukrainians solve problems. For years, Ukraine’s youngish businesspeople and activists have turned heads with their moxie and can-do spirit. The Help Ukraine Center is no exception. Its website proudly proclaims that the entire endeavor receives no government support.

It is these local organizations like Help Ukraine Center, Lifeline Ukraine, and Razom, that we should be supporting, not the bloated international organizations with snazzy billboards in European cities. A recent report sponsored by the British government found that while UN agencies and international NGOs received 87 percent of humanitarian funding for Ukraine following the Russian invasion, local NGOs had provided almost all of the humanitarian aid.

As I finally wave goodbye to Rudnieva and prepare to leave, Shikhashvili stops me. He has been eavesdropping and says my language is all wrong. “We don’t want to fix Ukraine. Ukraine is fixing the world,” Shikhashvili observes.