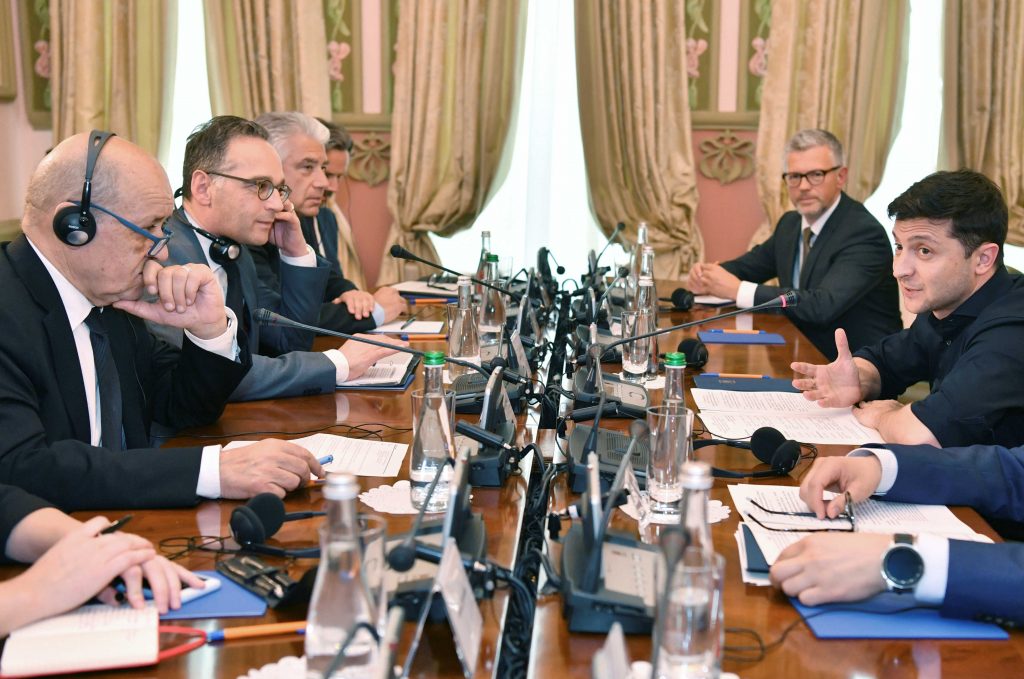 HBO and Sky UK’s “Chernobyl” is a tour de force. The mini-series should be required viewing by every leader and parliamentarian in Europe, especially in Germany.

It depicts the Chernobyl nuclear disaster of April 1986, an example of Moscow’s technological incompetence, disregard for human life, and political treachery. Instead of evacuating a vast area around the initial explosion and fire, the Russians cut off phone communication to the nearby village of 132,000 and dispatched 6,000 troops to keep residents there.

Most people don’t realize that a European apocalypse was only averted because two scientists realized that water beneath the burning core had to be drained to prevent a thermal explosion that would have blown up the other three reactors. Three Ukrainian workers volunteered to open up the sluices, and prevented a detonation, and discharge of radiation, that would have wiped out half of Europe, rendering it uninhabitable for thousands of years.

Deaths and cancer rates among Ukrainians since have been dramatic but unquantified, and an area of 4,000 square kilometers, almost double the size of Luxembourg, remains a no-go zone.

Now, thirty-three years later, Russia remains an existential threat to Europe and Ukraine is its biggest victim once more. This is a fitting backdrop to the summit in Berlin, on June 18, between Germany’s Chancellor Angela Merkel and Ukraine’s President Volodymyr Zelenskyy. The new leader was born in Kryvyi-Rih, only 550 kilometers from Chernobyl, and was eight years old when the meltdown occurred.

Sadly, Russia continues to murder Ukrainians in the east, five years after it seized and occupied seven percent of the country, and intends to bypass, and further cripple Ukraine, with its proposed Nord Stream 2 pipeline to Germany.

Currently, Russia supplies one-third of natural gas to Europe and delivers it through three pipelines, one through Belarus and Poland, another through Ukraine and Slovakia, and Nord Stream 1. Nord Stream 2, will replace the first two, creating a dangerous, and vulnerable, infrastructure dependency.

This is why 20 out of 28 EU nations are opposed to the pipeline. The implications for Ukraine are dire, not merely because it will lose $3 billion a year in transit fees (the amount it spends on defense against Russia), but because Russia will be able to cut off supplies to the country and pave the way for more control or its reconquest.

“Once Nord Stream 2 is built, Putin can do with Ukraine whatever he wants, and then we have potentially his army on the eastern border of the EU,” Poland’s Prime Minister Mateusz Morawiecki warned two years ago.

A child of the Cold War herself, Germany’s Chancellor Angela Merkel supports the project, but promises safeguards for Ukraine. Given Russia’s track record of flouting laws, norms, and treaties, this is total nonsense.

Clearly, she was outmaneuvered by Putin. He has co-opted former German Chancellor Gerhard Schroeder (and Angela Merkel’s arch rival), making him enormously wealthy as chair of Nord Stream AG and of Russian oil company Rosneft. His pipeline will turn Germany into Europe’s gas hub and provide cheap gas to its industry.

But as Russian gas floods Europe, prices will drop, volumes from Russia will increase, pushing out Western European supplies, giving Russia greater leverage over the European Union. This is why even President Donald Trump is threatening sanctions to prevent Europe from becoming “captive” to Moscow. Fortunately, Denmark has delayed Nord Stream 2 pending a lengthy environmental review.

And the European Union intends to place anti-monopoly restrictions on Gazprom. The company will be required to unbundle the pipeline which means it cannot own the pipeline too, and must permit competitors to access the pipeline.

Also significant is that the two frontrunners in the upcoming election of the president of the European Commission both oppose the pipeline. In the lead is Germany’s Manfred Weber who last year said: “I am against this [Russian] project. It does not meet the interests of the European Union.” And the second most likely candidate is Margrethe Vestager of Denmark known for her anti-Russian and anti-monopoly positions.

Russia’s project should have been rejected outright years ago. Nord Stream 2 represents the weaponizing of energy and is Putin’s latest move in a chess game designed to divide the West, destroy Ukraine, and control the rest of his Soviet empire. Germany must stop playing checkers.

Ukraine’s independence from the Soviet Union broke up the empire and its people have paid a monstrous price for generations. It’s time that Europe finally recognized its responsibility to this worthy nation, yearning to be free from Russian tyranny.

Diane Francis is a senior fellow at the Atlantic Council’s Eurasia Center, editor at large with the National Post in Canada, a distinguished professor at Ryerson University’s Ted Rogers School of Management, and author of ten books.