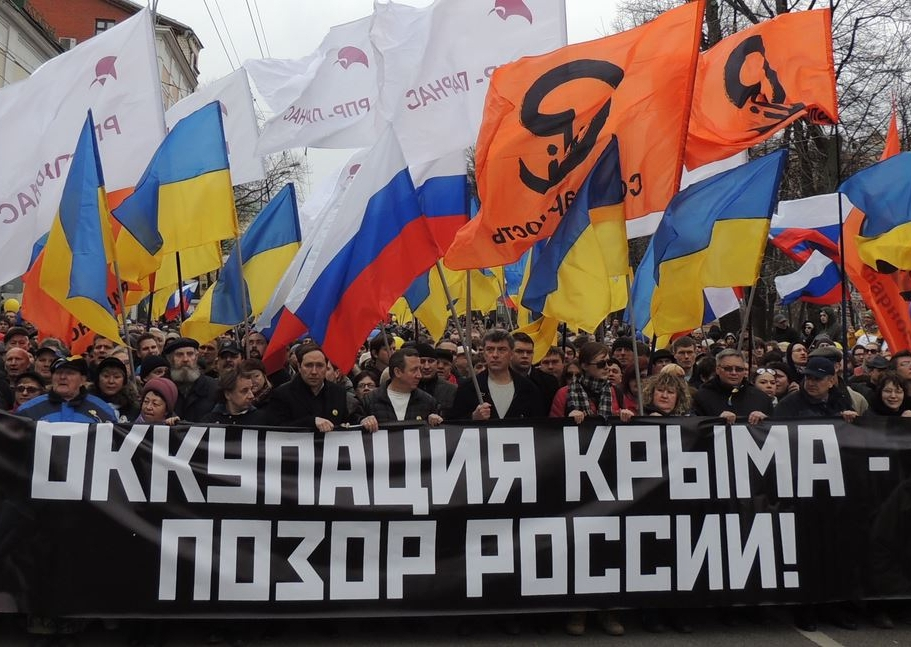 Although “regime change” has become a dirty phrase, the best thing that could happen to Russia, its neighbors, and the world would be a change from Vladimir Putin’s brand of strongman authoritarianism to some form of democracy.

Putin’s regime is oppressive at home and imperialist abroad. Power is concentrated in the hands of Russia’s dictatorial leader, who routinely violates human and civil rights and quashes all opposition, while legitimizing his rule by appealing to Russian dreams of erstwhile glory and great-power status and systematically engaging in military adventures in supposed defense of Russian minorities in Russia’s “near abroad.” Putin’s cult of personality centers on his hyper-masculine image as a tough leader willing and able to stand up to real and imagined internal and external foes.

Russian rights and democratic aspirations will continued to be stifled, and non-Russian states will continue to be invaded, as long as Putin’s regime stays in place.

Putin Is Expanding, Not Negotiating

Western hopes of resolving the Russo-Ukrainian war in eastern Ukraine by means of negotiations are therefore misplaced. Whatever Putin agrees to—even Ukraine’s agreement never to seek NATO membership—will be at best a temporary retreat from his expansionist foreign policy. And Putin’s choice of countries to pressure is large, extending from the Baltic states to Belarus, Moldova, and Ukraine to Armenia, Azerbaijan, and Georgia to the five Central Asian states. Russians or Russian speakers inhabit all these states and can, in principle, be used to justify Moscow’s strong-arm tactics.

The only effective short- to medium-term solution to this expansionism is the capacity of Russia’s neighbors to withstand Putin’s imperialism. The key state in any such emergent cordon sanitaire is, of course, Ukraine. But Belarus and Kazakhstan, both of which have very sizeable Russian-speaking populations, are a close second. If all three could be denied Putin, his imperialist proclivities would be effectively contained.

The only effective long-term solution to Putin’s expansionism, however, is regime change. Putin and his fascistoid regime will always be prone to repress Russians and oppress non-Russians. The Putin regime’s removal is thus the precondition of a freer and more neighborly Russia.

Naturally, no Western state will pursue regime change in Russia. Despite Russian claims to the contrary, Western policymakers have not done anything, are not doing anything, and are unlikely to do anything to make Putin and his regime go.

For better or for worse, however, they need not do anything, as the regime is fast crumbling and could easily collapse in the coming months or years. Hyper-centralized states with leader cults are extremely corrupt and ineffective forms of rule, and Russia is no exception. Thanks to high energy prices, Putin’s regime could engage in massive theft and still have enough for social and military needs. Those days are over, for good, and continued regime theft will now come at the cost of the population.

Russia desperately needs reform, but leader-centered states such as Russia can at best engage in business as usual and exhortations to the population to work harder. The leaders of such states are also prone to make huge strategic mistakes: convinced of their infallibility and lacking any institutional counterweight, they can pursue their madcap visions to the detriment of their country and, ultimately, themselves. Putin’s annexation of the Crimea, for instance, has worsened Russia’s economic, military, and diplomatic standing and transformed Putin into an international pariah. Finally, the legitimacy of Putin’s regime depends directly on his ability to project a hyper-masculine image of vigor and vitality. That ability is rapidly crumbling, as Putin visibly ages and comes to resemble what he is—an old man pretending to be young.

Continued Russian adventurism in the non-Russian states is the worst thing for such an ossified, corrupt, and near-bankrupt state. As Russian commitments exceed its capacities, as they very soon will, the economy and polity will come under increasing strain. At some point, a relatively small shock—a riot, a killing, a death—could easily spark an uprising, a putsch, or even civil war.

Ironically, the West is likely to face the prospect of regime change in Russia even though it desperately prefers not to think about such an eventuality. There is nothing that Western states can do to manage the inevitable decay of Putin’s regime in Russia. But they can do a great deal to limit the damage that regime change will bring about by actively supporting Ukraine and other non-Russian states and thereby containing the instability to Russia.

Image: Tens of thousands of Russians in Moscow, many of them backers of liberal and pro-democracy parties, protest the Putin government’s annexation of Crimea and its attacks on Ukraine, 15 March 2014. One group carried Russian, Ukrainian and party flags, and a banner reading “The Occupation of Crimea Is Russia’s Shame!” (Wikipedia/ P.L. Bogomolov/ CC License)