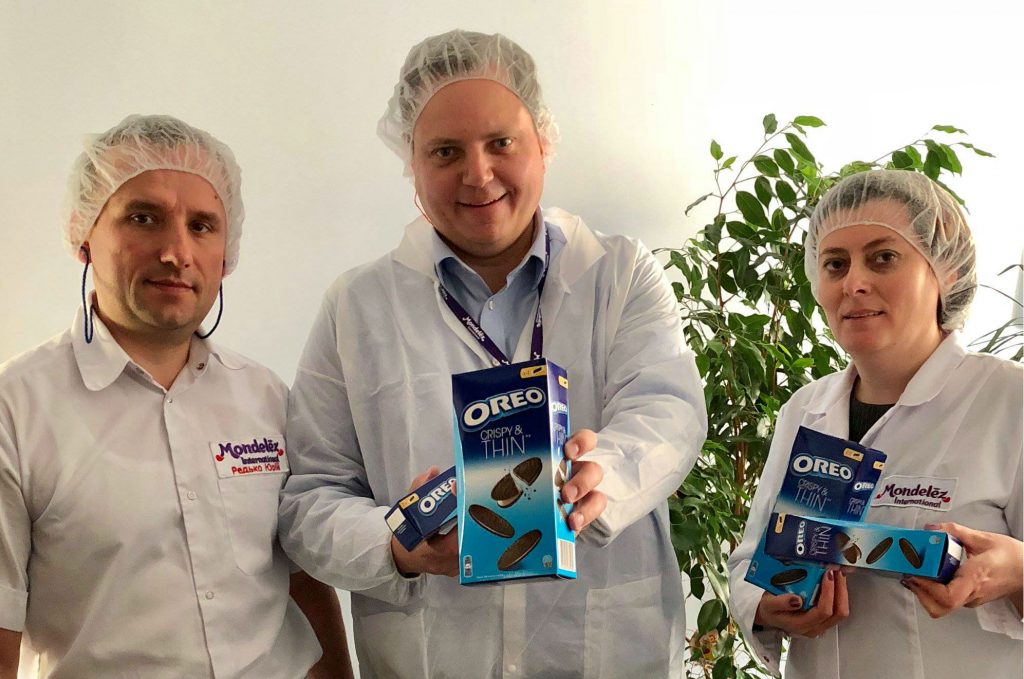 Ukraine is back on the front pages of the world’s top newspapers. Twice in the past three weeks Ukraine featured on the cover photo of the Financial Times. The headlines read: “US Backs Kyiv in Naval Clash with Kremlin” and “Kyiv Splits from Russian Church.” The news headings highlight the U-turn that Ukrainians have made shifting away from Russia and turning to the West ever since the 2013-2014 Revolution of Dignity.

The same shift is also happening in business.

Earlier this year, I visited Mondelez, formerly Kraft Foods, an American multinational confectionery and food company near the city of Sumy. The factory is situated thirty miles from the Russian border. It used to melt, mold, and package chocolate for consumers in Russia and Ukraine. After 2014, the company revolutionized its business model: the plant today operates twenty-four hours a day, seven days a week, and produces iconic US-brand Oreo cookies, which are exported across EU markets.

Throughout 2018, I traveled across Ukraine visiting firms from north to south, east to west. Wherever I journeyed, in Kryvyi Rih, Nikopol, Sumy, Ternopil, Odesa, Lviv, Dnipro, Kamianske, Chornobyl or Vinnytsia, I witnessed story after story of growth and plans for further development. I’m not surprised that 74 percent of American Chamber of Commerce members saw their business increase in Ukraine in 2018; three quarters are forecasting continued growth in 2019, according to our latest survey.

This expansion is a result of Ukraine’s economy showing continuous, albeit modest, growth over the past three years. After the illegal annexation of Crimea and Russia’s subsequent invasion, Ukraine went through a nasty fiscal plunge in 2014 and 2015. It is now rebounding.

For example, Ukraine’s 2018 cereal grain harvest hit a record-breaking high of 70 million tons, the highest crop ever reaped since 1991. Corn accounted for around half of that amount, due to exceptionally favorable weather conditions. The major ABCD agriculture commodity companies, Archer Daniels Midland (ADM), Bunge, Cargill and Louis Dreyfus, have stepped up their investment in Ukraine.

In addition to agriculture, our member companies grew in IT, healthcare, food and beverage, infrastructure, fast-moving consumer goods, renewable and nuclear energy sectors.

Kira Rudik, chief executive of Ring Ukraine, is one of the newly elected female CEOs to be voted on to the AmCham Ukraine Board of Directors. You may have seen the Ring TV ads on CNN. Kira established the company only two years ago with ten employees. Today, Ring employs over seven hundred research and development professionals in Ukraine. Just recently it was acquired by Amazon in a $1 billion deal. Ring makes high-tech doorbells that record live video of the homeowner’s doorstep then wirelessly broadcasts it to their smartphones. Through this technology Amazon expects to improve its parcel delivery service.

This is just one example of a thriving IT market in Ukraine.

Although optimism is widespread among companies already operating in Ukraine, new investors are still sluggish in setting up shop. Ukraine’s 2018 FDI remains pitifully low at a meagre $2 billion, under 2 percent of GDP.

Investors are waiting for predictability on what will follow March’s presidential vote and October’s parliamentary elections. The presidential race is wide open, confirming that the country’s democratic health is sound.

There were setbacks to investment in 2018 to be sure. In November, the introduction of martial law in ten regions across Ukraine resulted in some global corporate headquarters banning all business travel to Ukraine. Days after martial law was introduced, we put out an official statement reassuring companies of a “business as usual” approach. Russia’s aggression against Ukraine’s navy in late November did disrupt commercial vessels in the Azov Sea, however the introduction of martial law didn’t impact business in other areas. Martial law is expected to be fully lifted on December 26.

Not everything is perfect in Ukraine, especially as the war in the east continues for a fifth year and the threat of further Russian aggression looms. But the companies that continue to operate and take advantage of the resilient economy and economic reforms have remarkable stories to share. Our member companies are feeling bullish about the year ahead, and so are we.