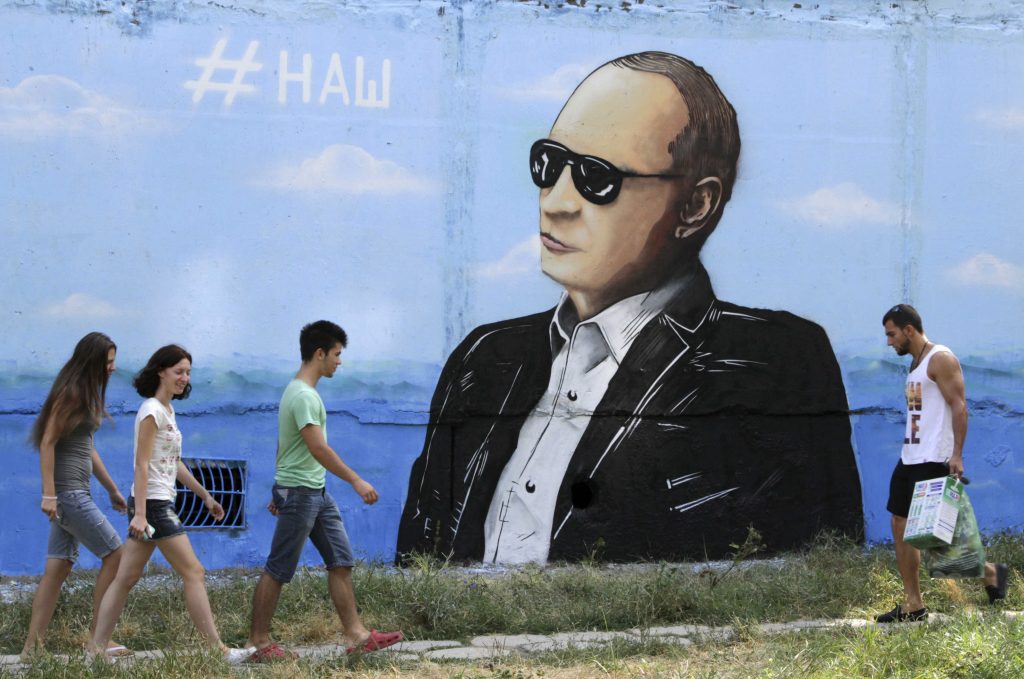 People walk past a graffiti depicting Russian President Vladimir Putin seen on a residential building in Simferopol, Crimea, August 19, 2015. The sign on the graffiti reads "Ours." REUTERS/Pavel Rebrov

From Great Britain to the Black Sea, Russia is waging a constant, unceasing information war against virtually every European government. This war takes many forms, but information war in essence entails what Peter Pomerantsev called the weaponization of information in the form of lies, misinformation, propaganda, exploitation of agents of influence, and reflexive actions inducing opponents to behave in ways they think benefit them but actually work to the enemy’s advantage. Among other things, numerous reports show that an army of so-called trolls exist in Russia who do nothing but defame honest reporters and reporting on Russia, and saturate the internet, television, newspapers, and other media with their misinformation.

All of this is well known, but in Europe and the United States, the “counterattack” to this form of warfare is almost invisible. US officials freely admit that they cannot deal with these attacks, and certainly there is no observable strategy, or even the beginnings of a program of action to confront this campaign of mendacity.

Yet the means to oppose this challenge are available to those who care to look for them. There is general agreement that the roots of Russia’s information war date back to the Soviet period. Both a cadre of experts and a literature exist that explain this form of warfare in both the past and the present, and outline how it can be successfully fought.

But in fact, today’s intelligence and policy community remains singularly ill-equipped and unready to meet this challenge. As US media and the House of Lords have already written, the United States and the United Kingdom lack sufficient experts in Russia and Russian military strategy. Moreover, despite the Obama administration’s frequent complaints about its lack of expertise, it neither makes adequate use of existing expertise, nor invests in creating new experts, nor solicits the views of independent experts outside the bureaucracy. By these policies and omissions, the Obama administration’s policymakers signal that in fact they do not take this threat seriously, despite its malignant effects.

Beyond those facts, the US intelligence community and policymakers are caught up in an ethnocentric paradigm of social science and marketing methodology with regard to information warfare that is utterly irrelevant to the way Moscow thinks and the sources of its behavior. Intelligent and well-educated professionals are apparently unable to understand that Russia exists in a cognitive universe that is utterly different from, if not antagonistic to, that of the United States—and that to understand Russian tactics and policies, one needs to think like a Russian.

This is not a new failure: in far too many wars, the United States has experienced this inability to grasp who the enemy is and how he thinks. Thus it is validating the observation attributed to Albert Einstein that insanity is doing the same thing over and over again and expecting different results.

Officials who disdain the need for specialists familiar with Russian language, culture, and overall defense policy, or who believe that Russians generally think and act just as they do, have primed themselves for disaster. And Moscow is only too happy to play this message back to credulous audiences who cannot or will not do the necessary homework to see what is really occurring. No less crippling is the US belief that anything it does is propaganda—as if telling the truth to foreign audiences, including Russian ones, is propaganda. The failure to devise an adequate strategy for Radio Free Europe/Radio Liberty or the Voice of America, or to fund one, and the continuing refusal to bring back something like the United States Information Agency, indicates a failure to understand what contemporary war is all about.

The United States will not acquire this insight by trying to categorize other cultures and civilizations, e.g. ISIL, in terms of a US social science that pretends to universality but is actually culturally blinkered and unable to understand that it is dealing with greatly opposed cultures that do not rely on this psychology. Educating specialists in language, history, philosophy, and literature would pay bigger benefits than continuing to immerse them in political science theory that assumes history began with Mikhail Gorbachev, or is wedded to the latest social science fads.

A century and a half ago, Abraham Lincoln admonished Congress that “as our situation is new, we must think anew.” Yet the United States refuses to take Lincoln’s words to heart. Until we genuinely comprehend these precepts, we will continue to fail to grasp Russia or our other adversaries, and will continue to be surprised by them, as has been the case in Crimea, the Donbas, and Syria.

UNESCO asserts, “Wars begin in the minds of men.” But the United States has closed itself off from its antagonists’ minds, and the resulting disarray is visible for all to see.