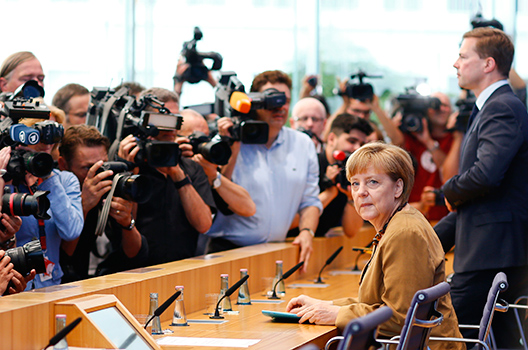 ‪Last week was a good one for both the transatlantic relationship and the cause of freedom in Ukraine. It followed weeks in which Moscow had escalated its war in southeast Ukraine, sending advanced weaponry and more fighters, and directly shelling Ukrainian forces. On Tuesday, after a month of dawdling, the EU joined the United States in imposing major sanctions on the Russian economy. What, finally, led Brussels to act?

Atlantic Council meetings last week in Brussels, Berlin and London – with more than forty NATO, EU, German and British officials, journalists and national security analysts – reflected a number of reasons for the sudden decision to impose stiff sanctions. It was not simply that Europe blamed Moscow’s insurgents in Ukraine for shooting down Malaysian Flight 17. After all, Chancellor Merkel said publicly the day after that it was too early to discuss additional sanctions. For many of our interlocutors a greater factor was the separatists’ callous handling of the victims’ remains, theft of their property, removal of evidence from the site and obstruction of investigators. As one cautious interlocutor asked, what type of people treat the dead like this? For Europeans, it was a clarifying moment.

‪‪This clarity was particularly felt by the Dutch, whose citizens were two-thirds of those killed on the flight and who heretofore had opposed tough sanctions on Moscow for its adventure in Ukraine. Indeed, the Dutch reaction to the shoot-down mirrored Chancellor Merkel’s. But the insurgents’ criminality at the crash site sparked an outrage that led Dutch politicians to urge strong measures against the Kremlin. Dutch advocacy left the EU’s other opponents of decisive action reluctant to oppose the sanctions.

‪Equally important was the impact in Germany, where the public had been slow to grasp the meaning of the conflict a few hundred miles to its east. Explanations for Chancellor Merkel’s hesitation to move decisively against Moscow usually cite Germany’s dependence on Russian gas exports and its large trade account with Russia. Another important factor is the imbalance of public discussion in Germany of the Ukraine question. Much German commentary has been shaped by Putin-Verstehen, a sense of sympathy toward the Kremlin and Mr. Putin that paints their behavior in a favorable light and gives them the benefit of the doubt in any situation that looks like a dispute with the United States. (Growing skepticism toward the United States, including anger over the Obama administration’s ham-handed management of the NSA eavesdroppping scandal, also feeds this.) Putin-Verstehen (or “Putin-Understanding”) has made it much harder for the German public to realize the suffering that Moscow’s insurgency has inflicted on the people of Ukraine.

‪The German public’s revulsion over insurgent actions at the crash site created the political conditions for the chancellor to impose the sanctions on Russia that she had let slide at the end of June. Surprisingly, even spokespersons for German industry expressed support for last week’s sanctions.

‪Even as European sentiment crystallized last week on the need to send Mr. Putin a strong message, the Continent still needed a transatlantic lead to make it happen. For months, the Obama administration has been encouraging its European allies to move toward stronger sanctions. The tough sanctions that Washington imposed in mid-July – when Brussels took rather modest measures – were taken in a way sensitive to European interests, which would make it easier for Europe to join later.

‪As conditions emerged in the past two weeks for a stronger response, the US exerted the necessary leadership. President Obama organized the conference call July 28 with the British, French and German leaders to lock up an understanding on additional sanctions. Susan Rice next spoke with her counterparts from those countries to nail down the details.

‪Last week’s results were good, but more sanctions likely will be needed to persuade Mr. Putin to pull back Russian fighters and armaments from Ukraine. Going forward EU caution will probably provoke further frustration in Kyiv and Washington. Yet last week was a good reminder that, as Winston Churchill said, the only thing worse than conducting a campaign with allies is conducting one without them.

John E. Herbst is the director of the Dinu Patriciu Eurasia Center at the Atlantic Council. He served as the US ambassador to Ukraine between 2003 and 2006.