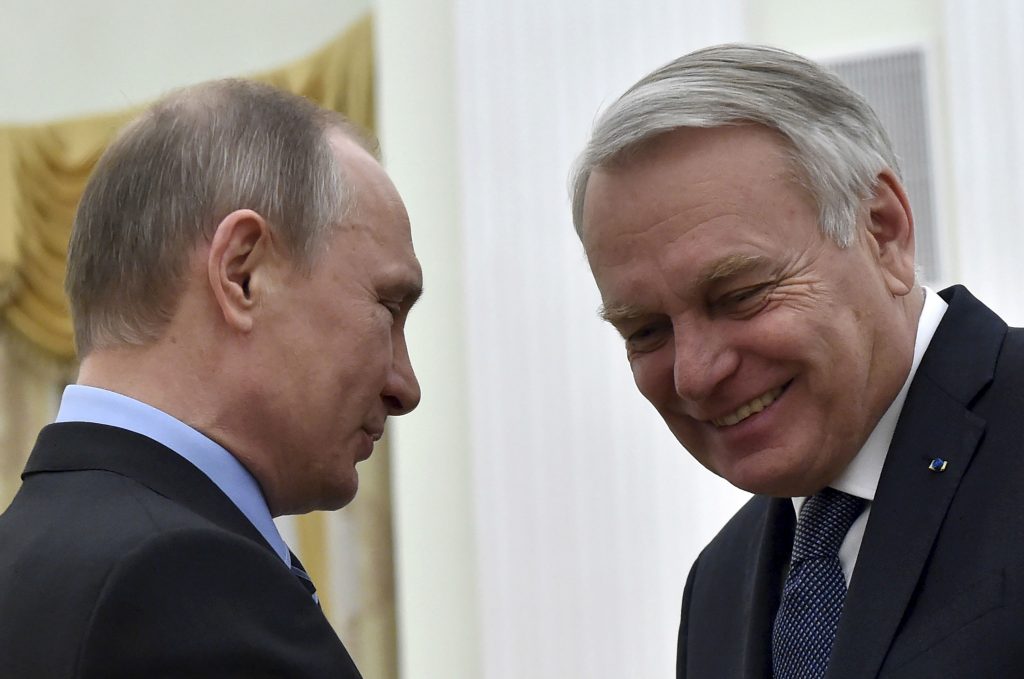 Calls for canceling the EU’s sanctions on Russia after they expire in July 2016 have recently been gathering momentum across Western Europe. On April 28, the French parliament passed a non-binding resolution recommending that the EU’s trade limits and other restrictions on Russia be lifted. Framing the sanctions as both ineffective and dangerous to France’s economic interests, conservative MP Thierry Mariani was able to secure majority support for the resolution. To be sure, only 101 of the 577 French National Assembly’s deputies voted, with only fifty-five—i.e., less than 10 percent of MPs—voting in favor of Mariani’s text.

Yet numerous similar rumblings have been heard elsewhere in the EU in the last months. Most ominously, in Berlin, the German business community continues to staunchly protest a prolongation of the EU’s sanctions. It does so in spite of Russia’s manifest noncompliance with the Minsk agreements sponsored by Chancellor Angela Merkel, and Moscow’s new aggressiveness in Syria leading to more refugees in, among other EU countries, Germany.

In most cases, the justification for letting the sanctions on Russia lapse comes down to economic calculations related to either the West or Russia. Yet how much have the sanctions actually mattered to European businesses and Russia’s economy? A sober weighing of the factors at play reveals that the EU’s sanctions have had an only secondary impact on Russia, and relatively minor consequences for Western states over the past two years.

To be sure, EU trade and investment in Russia has gone down substantially. Yet Russia’s economic malaise began before the invasion of Ukraine, and has had more to do with the concurrent collapse of oil prices than with Brussels’ policies. The main problem is that Russia’s economy and state have remained dependent on raw materials trade, and continue to be plagued by structural problems.

Like others, prominent Russian political economist Vladislav Inozemtsev has demonstrated that the Russian economy has, since President Boris Yeltsin stepped down on December 31, 1999, become more dependent on commodity exports—above all, oil. In the first years of the new century, Russia benefited from favorable world economic conditions, select improvements in Moscow’s economic legislation, and the dominance of liberal economists in Russian President Vladimir Putin’s entourage.

Nevertheless, the structural defects of post-Soviet Russia’s industry, such as widespread corruption and disproportionate state ownership, have only become more salient under Putin’s loudly announced “dictatorship of the law.” For several years, the increasing pathologies of Russia’s economy were covered up by the enormous inflows of petrodollars into the Russian economy and state budget. Yet the global financial crisis and recent oil price decline have disclosed its deep structural problems—but without leading to any significant reforms.

Against the background of such fundamental domestic flaws, Western sanctions merely compounded the far more consequential repercussions of the oil price collapse on the Russian economy and state, as a recent study by researchers at Berlin’s DIW think tank, published in the Journal of Comparative Economics, makes clear. To be sure, Putin’s own counter-sanctions on European goods has done substantial damage to Russian consumption, and has hit Russia’s population more directly than the West’s recent trade and credit restrictions.

Similarly, on the European side, the decline in EU-Russian trade was on the wane well before the first protesters appeared on Kyiv’s Independence Square. As one of us argued recently in a piece for LSE Ideas, the EU-Russian trade relationship has never been as smooth as German businesses or French parliamentarians would have their publics believe. While trade was again on the upswing after the global financial crisis, it was dominated by only a few goods. With oil prices down since 2014, Moscow’s income, Russians’ demand for European goods, and the ruble have accordingly dropped.

Even if all sanctions were lifted tomorrow, neither the ruble nor Russian budgets would increase much. The weakened markets in Russia would not be able to absorb many German or other relatively expensive goods produced in high-income countries. As a destination for Western direct investment, Russia may have become more attractive in purely economic terms, as its labor force is now cheaper than before the ruble’s slide. But as long as the future of the Kremlin’s political relations with the West remains unclear, only a few Western investors will put much money into Russia’s industry or agriculture.

Moreover, the EU has been concluding new and taking advantage of its older free trade agreements with other interlocutors since the global financial crisis, opening up additional markets for its goods and alternative destinations for its foreign direct investment. The European parliament has noted that the European sector hit hardest by the sanctions, agriculture and agro-processing, persevered due to the expansion of its foreign trade elsewhere.

While some pro-Russian interest groups in the EU remain vocal, a number of other Russian-oriented industrial companies in the EU have reoriented themselves, as more businesspeople distrust the Kremlin’s increasingly erratic leadership. The sense of reliance on Russia that Europe felt in the past has dissipated. Moscow’s obvious shift from the status quo to a revisionist power has affected world politics, European security, Western public opinion, and international diplomacy as much as it has global trade, investment, and financial flows.

Most revealingly, as Inozemtsev has pointed out, Russia’s foreign trade with its former “modernization partners” in the West has not only sharply declined; its trade with its new official allies within the supposedly well-integrated Eurasian Economic Union has also dramatically decreased. While Russian imports from the EU declined almost 41 percent in 2015, they simultaneously dropped by 36 percent from the EEU’s second largest economy, Kazakhstan, which has been in a customs union with Russia since 2001. A similar story goes for the Kremlin’s much-celebrated alternative to the EU as its new global strategic partner: Beijing. Russian trade with China has been not only rhetorically but also practically promoted by the Kremlin since its fallout with the West in 2014. Nevertheless, Chinese exports to Russia declined by 34 percent in 2015.

Russia’s current economic decline is due to its deep structural defects and over-reliance on oil export revenues, not to Western sanctions. Nonetheless, the EU will lose much of its credibility if it lifts sanctions without any substantial improvement of the situation in Ukraine’s Donbas. And it will gain only a little economically, as long as Moscow fails to begin fundamental economic reforms at home and markedly improve its political relations with the West.

Additionally, one should not discount Washington’s willingness to compensate for a loss of European pressure on the Kremlin. If, this summer, the EU cannot get its act together to prolong sanctions, the United States and Canada may decide to tighten their sanctions regime in such a way as to make up for the decline of European trade restrictions. Europe’s business communities and political elites should think twice before they push the EU to lift its sanctions without substantial progress by Russia in meeting its Minsk agreement obligations.