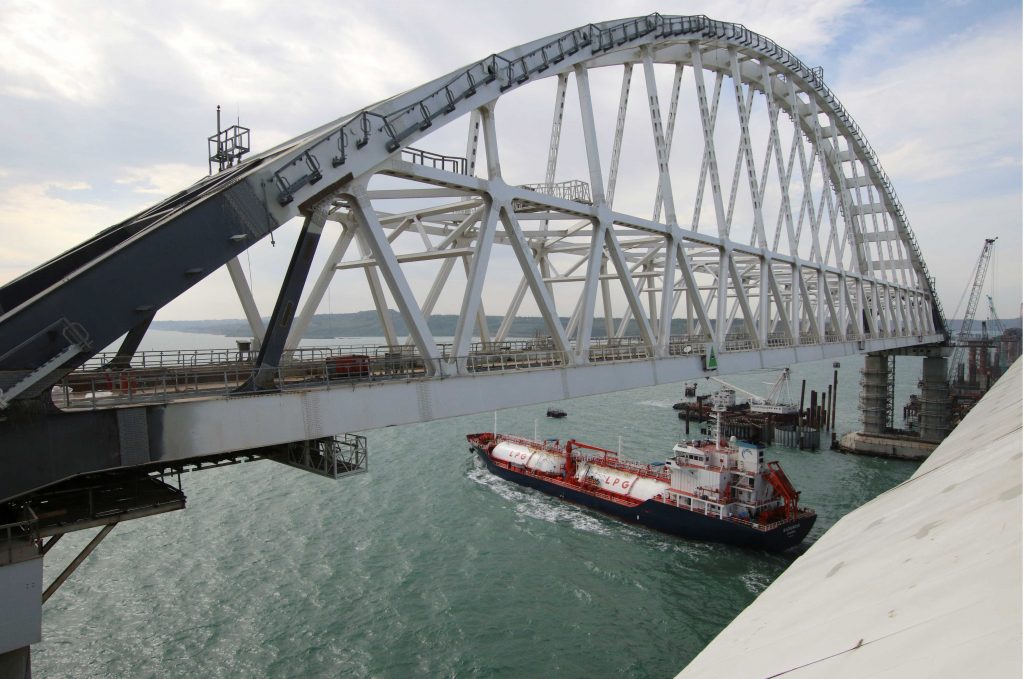 A general view shows a road-and-rail bridge, which is constructed to connect the Russian mainland with the Crimean Peninsula, in the Kerch Strait, Crimea April 25, 2018. REUTERS/Pavel Rebrov

Having illegally annexed Crimea in 2014, Moscow lost no time in seizing Ukrainian energy assets in and around the region. The Kremlin is now conducting another experiment in economic and military operations, but this one has profound implications beyond Ukraine.

Before the seizure of Crimea, both Ukraine and Russia agreed to regard the Sea of Azov as the internal waters of each state. Thus, the states had shared sovereignty over that body of water; in the case of disputes, they would resolve them jointly.

This result held until the invasion of Crimea. Now, Russian President Vladimir Putin claims—in utter defiance of both facts and international law—that Sevastopol has always been Russian, and Crimea is now Russian and will never be detached from Russia. Further, Moscow says that there is no need to renegotiate the original treaty with Ukraine governing the status of the Sea of Azov.

But while making these statements, Moscow has been busy building a bridge over the Kerch Strait and a railway upon that bridge. This bridge was deliberately built at a height that all but precludes Ukrainian commercial traffic from operating in the Sea of Azov, thus placing the port of Mariupol in economic jeopardy. And in another contravention of international law, it has declared that it will block any NATO attempt to send ships into the Sea of Azov, even if they are invited by Ukraine.

Russian officials are also boarding Ukrainian ships illegally, enforcing a blockade of the Sea of Azov and of Ukraine’s coastline while also reinforcing its fleet in the area. Additionally, they are threatening to launch a variety of potential military operations against Ukraine: naval shelling of land targets, an amphibious operation against Mariupol or the coastline, and another ground force invasion, all supported by naval artillery.

Ukraine does not have the means to counter these threats. What it needs is foreign help in the form of weapons from the United States so that it can build a joint land, sea, and (if necessary) air force to deter Russian military actions in order to relieve economic pressure. US Ambassador Kurt Volker has stated Washington’s willingness to offer Ukraine more weapons. This statement now needs to be backed up by action.

However, the issue of the Sea of Azov does not end here: there is more at stake than just Ukraine. The international community cannot recognize the right of Russia to seize territory by force, annex it, and then pretend that it has always been and will continue to be Russian. That opens the door to further adventures across the former Soviet and even Tsarist empire, jeopardizing every state from Finland to Bulgaria.

Moreover, even a casual examination of Russian actions reveals the deep and continuing parallels with China’s equally illegitimate actions in the South and East China Sea. In the Asian case, the United States has mounted and continues to stage numerous Freedom of Navigation Operations to demonstrate to China that it will uphold the time-honored principle of the freedom of the seas.

This principle is no less at stake in the Black Sea and the Sea of Azov. Ideally, NATO, at Kyiv’s invitation, should send a fleet to Mariupol to shatter the pretense of Russian sovereignty and show Putin that the invasion of Ukraine has brought NATO into Ukraine. This is precisely the outcome Russia aimed to avert.

While it is not likely that NATO will follow this advice, it is equally unlikely that Russia would successfully block it or shoot at it; Ukrainian ships have already exercised there without problem. Moscow’s emulation of Chinese operations here also suggests not just the well-known shared dialogues and learning that have gone on between their general staffs for a decade. There is also the implication of something like an informal military alliance, whereby one side probes the US in one theater and, depending on the reaction, the other side follows suit in a different region.

Clarifying to Moscow and everyone else that the United States will defend freedom of navigation and Ukrainian sovereignty in the Black Sea and the Sea of Azov is no less important than doing so in the South China Sea. And it is high time that we did so along with our NATO allies; this is as vital an interest to them as it is to us.