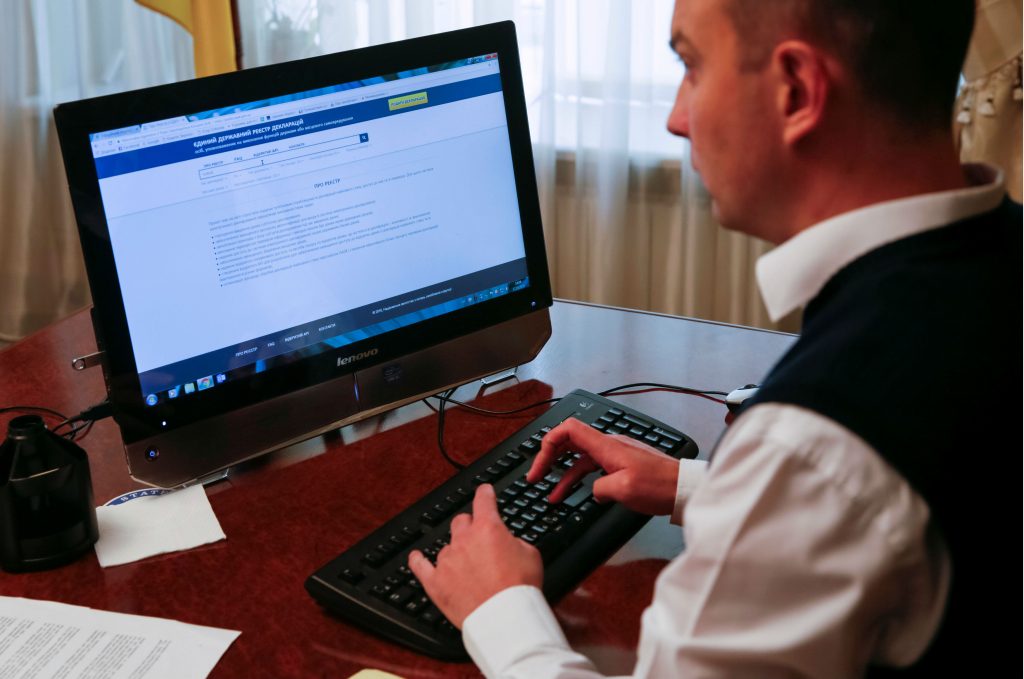 Since the Euromaidan revolution, Ukraine’s leaders have repeatedly committed themselves to fighting graft. Former Prime Minister Arseniy Yatsenyuk promised that all corrupt officials would be prosecuted, current Prime Minister Volodymyr Groisman vowed an “intolerance of corruption,” and President Petro Poroshenko campaigned as a reformer who would “wipe the country clean” of endemic graft.

Despite these promises, however, activists warn that Ukraine’s political class is currently aiming to systematically roll back key reforms.

First, numerous attempts have been made to derail Ukraine’s critical electronic declaration law, which requires all public officials to file an e-declaration disclosing their assets. Two MPs from the Petro Poroshenko Bloc (BPP) faction in parliament have attempted to introduce laws that would effectively kill the policy.

Activists and their allies in parliament, such as the head of parliament’s anticorruption committee, Iegor Soboliev, have successfully fought off these laws for now. However, thanks to collusion between the National Agency for the Prevention of Corruption (NAPC)—the agency responsible for managing the e-declaration system—and a state agency called the State Service of Special Communication and Information Protection in Ukraine (SSSCIP), the system’s current format violates Ukrainian law and provides corrupt officials with several loopholes for hiding their assets and defeating potential prosecutions.

Another signature reform, the establishment of the independent National Anti-Corruption Bureau (NABU), is also under heavy attack. At the behest of Ukraine’s Prosecutor General Yuriy Lutsenko, a close Poroshenko ally with no legal experience prior to his appointment, Poroshenko Bloc lawmakers have recently initiated four draft laws that would effectively kill NABU’s power and independence, transferring authority to Lutsenko’s General Prosecutor’s Office (PGO). These laws would allow Lutsenko to forward cases that should be investigated by NABU to other law enforcement bodies; give the PGO the sole right to arbitrate investigative turf wars for corruption-related crimes; permit the PGO to veto NABU’s right to request that parliament waive legislators’ immunity; eliminate NABU’s authority to work with foreign law enforcement agencies; and abolish the mandatory publication of all of the PGO’s orders on the organization’s website. Taken together, these steps have led the civic group Reanimation Package of Reforms (RPR) to demand that authorities reject the current bill, which violates the constitution and would seriously roll back prosecutorial reform.

Some observers speculate that the motivation for limiting NABU’s role may be the desire of the PGO to have a greater role in high-profile corruption cases. They also point to budget plans to sharply increase spending on NABU. Whatever the reasons for the jurisdictional fight between NABU and the PGO, it is critical to resolve it so that NABU, and also the PGO, can get down to the business of fighting corruption.

Meanwhile, despite progress in the judicial arena—approximately one thousand judges from former President Viktor Yanukovych’s era chose to resign rather than declare their assets, and new Supreme Court judges will be chosen in an open competition—reforms there also face strong resistance. Activists report that Poroshenko recently introduced a law that would impair the implementation of reforms in the High Council of Justice (HCJ), a new constitutional body responsible for appointing, dismissing, and disciplining judges. Additionally, the new edition of the law on the judiciary, passed by parliament and signed by Poroshenko, allows corrupt Yanukovych-era heads of courts to keep their seats for another seven years. “This does not represent the ‘deep cleaning and upgrade’ from the president’s original political platform,” said Reanimation Package of Reforms’ judiciary expert Mykhailo Zhernakov, “but rather leaves too much of the corrupt status quo in place.”

RPR activists also bemoan attempts to undermine civil service reform. Prior to the country’s new civil service law, the selection of the heads of local state administrations (LSAs) was controlled by the president. Ukraine’s revolutionary new law requires an open competition for the appointment of these LSA heads, thereby introducing fresh blood into local governments and decentralizing power. However, at the behest of the deputy head of the presidential administration, Vitaliy Kovalchuk, BPP leadership recently introduced a new law that would return the selection of LSA heads to the president. RPR describes this as a “usurpation of power” by the president, notes that it violates Ukraine’s constitution, and frets that it will reopen the old Yanukovych-era practice of selling positions to local power brokers loyal to the president.

Finally, the authorities even seem committed to undermining police reform. In 2015, Arsen Avakov’s Ministry of the Interior established a vetting commission to dismiss corrupt police officers. Recently, though, several NGOs assisting the ministry withdrew from the commission, asserting that Avakov was stacking the commission with his cronies. Avakov also seeks to protect police by creating a presumption of innocence regarding any actions officers may take. Oleksandra Drik, chair of the Civic Lustration Committee’s board and coordinator of a coalition of anticorruption NGOs called Declarations Under Control, argues that while the creation of new traffic police was successful, “other than that, police reform is a mockery. Reform is controlled by Avakov…plus the same militia that we used to have under the different name.”

To be clear, not everything is dire. Economic reforms, including macroeconomic stabilization, fiscal and bank supervision reform, and energy reform, have been quite successful. Public procurement reform also remains a signature anticorruption achievement for Ukraine. Activists see other encouraging signs: 25,000 e-declarations have already been submitted, and both Prime Minister Volodymyr Groisman and Speaker of Parliament Andriy Parubiy recently filed their own declarations as well—a clear sign to other officials. In sum, reforms show many signs of producing the real changes Ukrainians demand.

Nonetheless, it’s impossible to miss that a good number of the legislative attempts to roll back anticorruption reforms come from Poroshenko’s own parliamentary bloc or the presidential administration. Poroshenko does not control the entire parliament, but he presumably does have the ability to prevent his own administration and senior parliamentary and government allies from repeatedly and blatantly trying to undo Ukraine’s most important reforms.

Poroshenko could reverse his falling poll ratings if he acted more forcefully to support civil society reformers and their parliamentary allies.

Josh Cohen, a former USAID project officer who managed economic reform projects throughout the former Soviet Union, is a business development professional. He is a contributor to UkraineAlert.

Image: Iegor Soboliev, a lawmaker and the head of the Ukrainian parliament's committee on fighting corruption, views a computer screen showing the online income declaration system during an interview with Reuters in Kyiv, Ukraine, October 17, 2016. Picture taken October 17, 2016. REUTERS/Valentyn Ogirenko