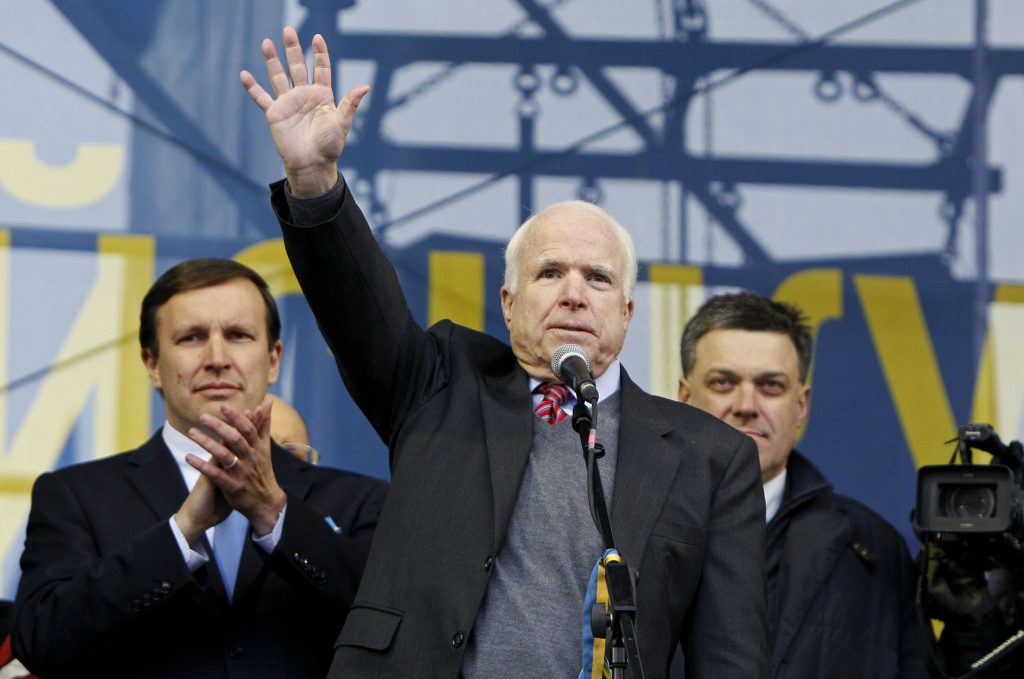 Many accolades will be written about Senator John McCain this week and deservedly so. He was a consistent champion for democracy and human rights throughout the world, and a man who always stood by his principles. In his role as chairman of the International Republican Institute (IRI), McCain was considered a champion, particularly in the former Soviet space, of freedom, justice, and fairness.

McCain’s moral leadership was captured well during his final meeting with Boris Nemtsov, leader of Russia’s main opposition political party and chief critic of President Vladimir Putin. Only a few months before Nemtsov’s assassination in Moscow, I organized a meeting for McCain and Nemtsov in Vilnius, Lithuania.

There McCain showed his prescience when he inquired about Nemtsov’s safety due to his steadfast criticism of Putin as a murderer, thug, and KGB agent. Nemtsov looked McCain directly in the eye, smiled and said, “You know, Senator, Putin really hates you.” This drew a smile from the senator. “Do you know why he hates you, Senator?” Nemtsov asked and paused. “It’s because he’s afraid of you. And the reason he’s afraid of you is that he knows that deep down, you will always stand by your principles. That frightens him, because unlike you, he is a man without principles.”

A short while later, in February 2015, Nemtsov was gunned down in the shadows of the Kremlin.

McCain now joins Nemtsov in death, and I cannot help but believe there is a special place in heaven for these two tireless advocates of democracy and human rights, who never wavered in their principles and dedication to what was right and just, even when it cost them personally.

Another great example of McCain’s dedication to principle came in December 2013 when thousands of Ukrainians took to the streets of Kyiv to demonstrate their hopes for membership in the European Union. After former President Viktor Yanukovych’s government brutally attacked unarmed protestors, tensions were high.

In the first week of December, McCain and I discussed the possibility of traveling to Kyiv so that he could address the crowds on the Maidan. He had been advised by the State Department not to travel to Kyiv, due to heightened security concerns—and I remember his words quite well: “We cannot be concerned about our own security; we have to support our friends in Ukraine because it’s the right thing to do.” On December 15, McCain addressed a crowd of nearly one million people. He let them know than America stood with them on their path to Europe and struggle for a better future for their children and grandchildren. In response, the crowd chanted his name repeatedly.

Political opposition leaders later told us that they believed that McCain’s presence prevented the Yanukovych government from instituting a major crackdown on the opposition that weekend, and I believe that the senator prevented extensive bloodshed. In this moment, McCain’s devotion to principle outweighed concern for his own personal safety.

With his passing, it is vital that we continue to fulfill McCain’s legacy, a legacy of principle and values, throughout the former Soviet space as well as the rest of the world. As McCain declared on the Maidan, to our friends and allies around the world, “The free world is with you. America is with you. I am with you.”

Stephen B. Nix is the Regional Director for Eurasia at the International Republican Institute in Washington, DC. He tweets @stephennix.

Image: US Senator John McCain (C) waves to pro-European integration protesters during a mass rally at Independence Square in Kyiv December 15, 2013. Thousands of Ukrainian massed on Sunday for a rally against President Viktor Yanukovych just days before he heads for a meeting in the Kremlin which the opposition fears will slam the door on integration with the European mainstream. REUTERS/Gleb Garanich