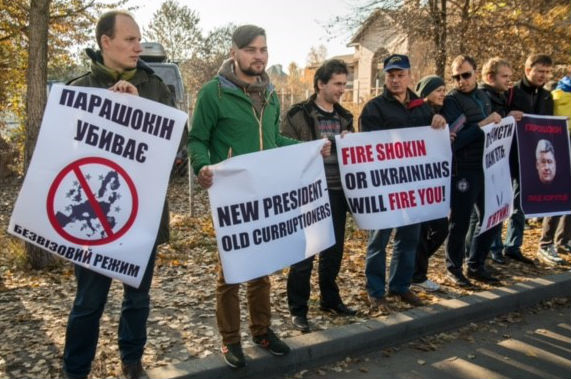 On October 31, protesters parked ninety-three cars outside the private residence of Ukrainian President Petro Poroshenko to demand that he fire Prosecutor General Viktor Shokin. Protesters held signs demanding change and a few held placards supporting the President. The atmosphere was reminiscent of the Euromaidan protests, but on a much smaller scale.

Elected on a promise to reform Ukraine and fight corruption, reformers now fear Poroshenko has gone off course.

The current imbroglio centers on Shokin, a Poroshenko ally and protector of the country’s corrupt old guard. Ukrainian reformers, including prominent civil society organizations and more than 100 members of the Verkhovna Rada, have demanded that Poroshenko fire Shokin—a request Poroshenko has ignored. Here’s why Poroshenko’s ongoing support for Shokin is so dangerous.

In a recent Brussels meeting with the President of the European Commission, Poroshenko received a promise that in exchange for implementing graft-fighting measures, the European Union would eliminate visa requirements for Ukraine’s 46 million citizens. In return, Ukraine would implement a series of anti-corruption reforms. At the top of the list is the nomination of a new independent prosecutor tasked with bringing down corrupt government officials. An eleven member selection panel—seven nominated by the Verkhovna Rada and four by Shokin—are to choose the best candidate for the post.

Shokin’s nominees are closely associated with the old system. At the Prosecutor General’s Office, Yury Hryshchenko managed Volodymyr Shapakin, the so-called “diamond prosecutor” who was arrested earlier this year in a sting operation for bribery with $400,000 dollars of cash in his office and $100,000 of diamonds in his home. First Deputy Prosecutor General Yury Sevruk has stymied reforms in the Prosecutor General’s Office. Reformers believe that making anti-reform individuals like Hryshchenko and Sevruk directly responsible for selecting the most important anti-corruption figure makes the process a mockery.

But it gets even worse. After Jan Tombinski, the European Union’s Ambassador to Ukraine, criticized Shokin’s appointments, Ukraine’s Foreign Ministry sent a letter to the National Council on Reform urging Shokin to replace his appointees to the selection panel with qualified candidates.

Shokin doubled down, dismissing outside criticism and asserting his right to put whomever he wants on the panel. Shokin followed this up by allegedly threatening to prosecute Ukraine’s Foreign Ministry “for criminal acts intended at undermining the authority of state institutions” in a letter that Ukrainiska Pravda obtained and published. It seems Shokin prefers to use his prosecutorial discretion to threaten the very people seeking to free Ukraine from its endemic graft.

“Poroshenko came of age in a system where the Prosecutor General was used as a weapon against political opponents, and Poroshenko remains determined to maintain control over this critical lever of power,” said Daria Kaleniuk, executive director of the Anti-Corruption Action Center in Kyiv, in an interview on November 3.

Others have suggested that Poroshenko’s majority in the Verkhovna Rada is not very stable, and investigating corruption in his own coalition could lead to the loss of his parliamentary majority.

Ukrainians stand to pay a high price for Poroshenko’s focus on self-preservation. According to Kaleniuk, Poroshenko’s support for Shokin not only jeopardizes visa-free access to the EU, but risks costing Ukraine $4.4 billion in desperately needed financial assistance—$1.2 billion from the EU and $3.2 billion from the International Monetary Fund.

Ukraine’s civil society reformers are right to demand the Prosecutor General’s ouster—and Poroshenko’s decision to protect Shokin is inexcusable. If Poroshenko continues down this path, he will surely receive more visits from the determined activists of the Euromaidan.