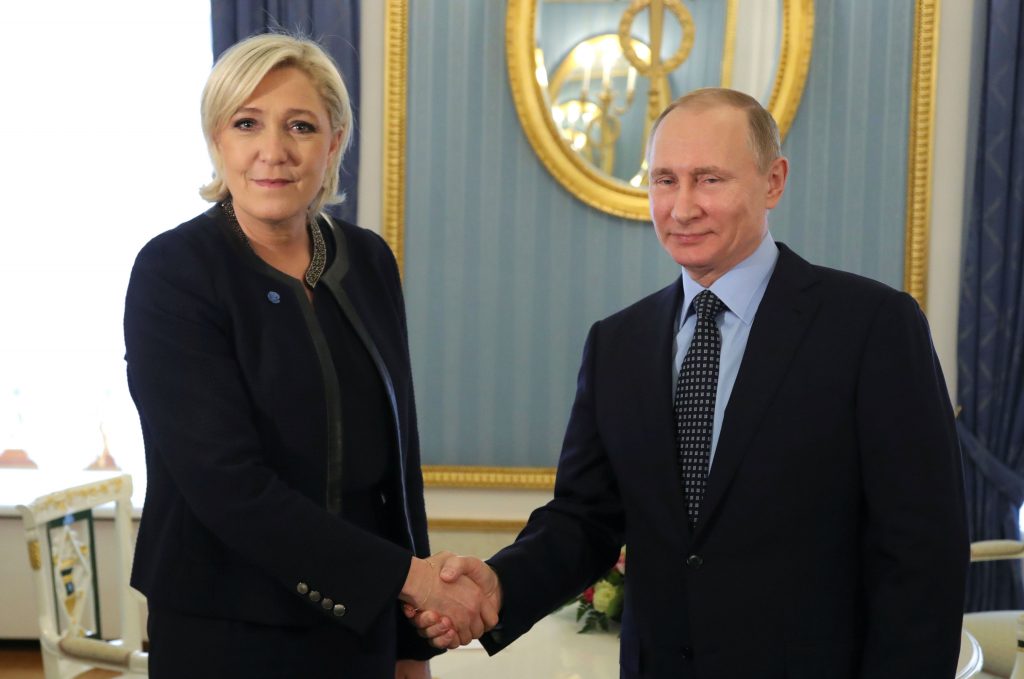 On March 24, Marine Le Pen, the leader of France’s National Front (FN) party and a contender for the French presidency, flew to Moscow for a surprise visit with Russian President Vladimir Putin. Le Pen’s photo op of a one-on-one meeting with Russia’s president certainly made her look presidential, but it’s an image that may not boost her popularity among French voters ahead of the April elections. Only 20 percent of French voters have confidence in Putin.

For the Kremlin, the strategy of openly cultivating connections with Europe’s far-right populists may backfire in this case as well. Russia’s meddling in the US presidential election last fall raised the alarm in European capitals about the threat of Russian influence. As public awareness of Russia’s disinformation operations, cyberattacks, and corruption schemes in Europe grows, European policymakers and voters are becoming more suspicious of Putin’s European allies. Rather than forming the new “nationalist international,” Putin and his fellow travelers risk becoming isolated in Europe.

Le Pen is perhaps most vulnerable among Europe’s populists if public opinion turns against the Kremlin. Le Pen has always been received at very high levels in Moscow and doted on by the Russian state-sponsored media. In June 2013 and April 2014, she was in Moscow to meet with the head of the Russian parliament, Sergei Naryshkin. One article suggests that Le Pen may have had a secret meeting with Putin in February 2014—at the height of Russia’s military takeover of Crimea and four months before the European Parliamentary elections, when FN had its best election result ever, with 25 percent of the votes. Following these visits, FN received €2 million from a Russian-backed Cypriot company, and in the fall of 2014, the party received another loan of €9 million from the First Czech Russian Bank. While Le Pen has denied any quid pro quo relationship, she is one of the most vocal and ardent supporters of Putin’s foreign policy in Europe. In January 2017, she denied that there was ever a Russian invasion of Crimea, saying that Crimea “was always Russian.”

Moscow generally prefers to work with the party in power. When Francois Fillon clinched the nomination for the center-right Republicans in November 2016, he was projected to win the French presidency as well. Fillon has personal links to Putin, has called for abolishing sanctions, and ran on a Euroskeptic agenda. From the Kremlin’s point of view, Fillon looked like a much more promising bet than Le Pen. Of course, that changed once Fillon became entangled in a highly damaging corruption scandal. As his support began to dwindle, Le Pen’s began to rise. She is now locked in a dead heat with Emmanuel Macron, an independent young candidate who would not be Moscow’s preferred choice; he is pro-Europe and supportive of sanctions. Sensing a potential shift in the Kremlin’s calculations, Le Pen paid a visit to the Kremlin.

According to recent polls, Macron would beat Le Pen 64 to 36 in the second round of voting. Moscow has already launched an “anyone but Macron” influence operation, an intense smear campaign that paints him as a gay Jewish US agent. The French secret services warned of interference by Russia in the election campaign, where, beside the pro-Russian media sites, tens of thousands of bots are actively propping up Le Pen.

But Putin’s public endorsement may hurt more than it helps by feeding Le Pen’s critics, who paint her as a puppet of the Kremlin. It’s here that Putin may have miscalculated, revealing his opportunistic tendencies. If the Kremlin really wanted to help Le Pen’s chances, it would have been more effective to quietly finance her party while continuing the disinformation campaign against Macron. This, more than a photo op, would have served Le Pen’s ambitions while shielding her from criticism and still giving the Kremlin the option of plausible deniability. Instead, Le Pen’s pandering to the Kremlin, one month before the elections, could help Macron’s image as a political outsider not beholden to vested interests.

Russia has managed to establish good relations with two French presidents so far: Jacques Chirac and Nicolas Sarkozy. Both were initially wary of Putin but warmed to him by the end of their terms. But if Macron wins the presidency, rebuilding Russia’s relationship with France after a brutal disinformation campaign against the head of state will be extremely difficult. Of course, the election is not over. The confidence that the Kremlin currently has in Le Pen could be based on hope or something more nefarious, such as knowledge of damaging “kompromat” similar to the Wikileaks scandal that hurt presidential candidate Hillary Clinton in the United States.

Putin, in his overconfidence following the US elections, may have bet on the wrong horse in France. And the consequence of such a miscalculation will be isolation—just the opposite of what Moscow is seeking.

Péter Krekó is a senior associate at the Political Capital Institute in Hungary and a visiting professor of Central Eurasian Studies at Indiana University. Alina Polyakova is director of research for Europe and Eurasia at the Atlantic Council. She tweets at @alinasphere.