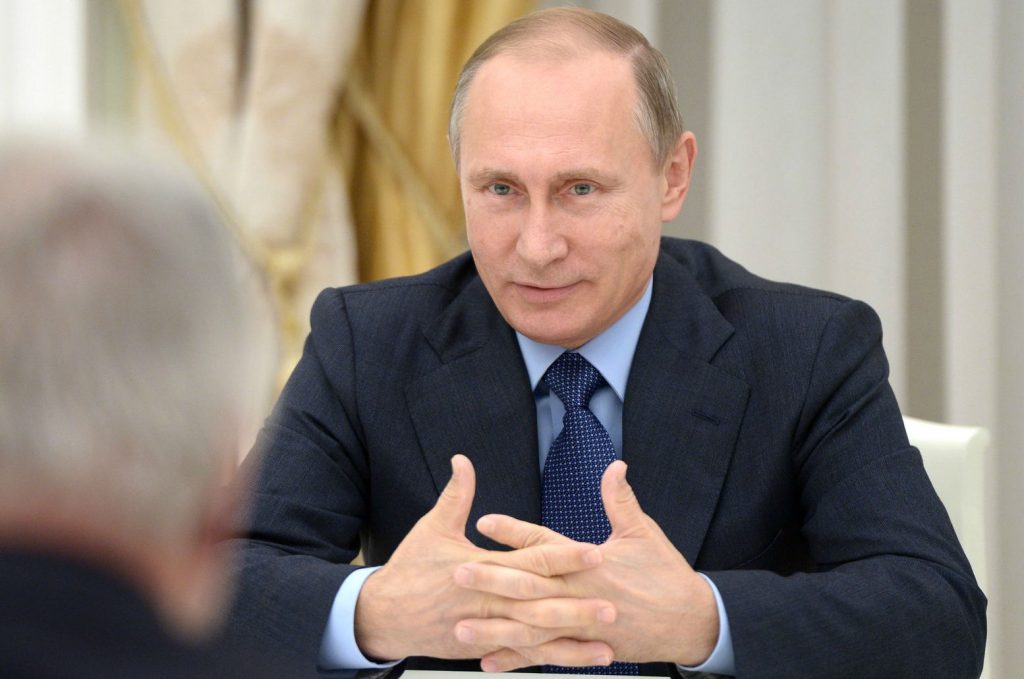 On August 29, Russian President Vladimir Putin, French President Francois Hollande, and German Chancellor Angela Merkel agreed that a ceasefire should take place in eastern Ukraine on September 1. And indeed, on that day, most guns fell silent. The separatists stopped firing because Putin instructed them to do so. Credit: Kremlin.ru

The ongoing ceasefire in eastern Ukraine may or may not lead to a lasting peace, but it has already had one important consequence: it has undermined both Russian and realist interpretations of the Russo-Ukrainian war.

On August 29, Russian President Vladimir Putin, French President Francois Hollande, and German Chancellor Angela Merkel agreed that a ceasefire should take place in eastern Ukraine on September 1. And indeed, on that day, most guns fell silent. Since then, the ceasefire has largely held.

The separatists stopped firing not because of anything Hollande or Merkel said, but because Putin instructed them to do so. In short, Putin stopped the war. Consider what this fact means for explanations of the war proposed by Putin and realists.

Putin has usually explained the 2014 invasion of Crimea and eastern Ukraine as a defensive measure necessitated by the “fact” that Ukrainian fascists had seized power in a coup, and that the rights and lives of Ukraine’s Russians and Russian speakers were in danger. Russia had no choice but to come to their aid.

On September 1, 2015, however, the very same Ukrainian “fascists” were still in power in Kyiv. Indeed, they now have an army of over forty thousand battle-hardened patriotic troops, supplemented by former volunteer battalions that the Kremlin has never failed to call fascist as well. If Russians and Russian speakers were right to fear for their lives in 2014, they have even more reason to fear for their lives today.

Russian and Western realists have also explained the 2014 invasion in light of two supposed facts. First, the United States allegedly staged the Euromaidan, thereby attempting to wrest Ukraine from Russia’s legitimate sphere of influence. Second, NATO had relentlessly expanded its boundaries and was determined to incorporate Ukraine in the aftermath of the CIA-inspired Euromaidan, directly threatening Russia’s security. Naturally, Russia could not simply watch as the West encroached upon its interests, so it responded as any great power would: by flexing its muscles and showing that it would not tolerate more Western expansion.

On September 1, 2015, however, the US commitment to Ukraine, as well as its presence and interests there, were much greater than they had been in early 2014. So, too, were NATO’s. Indeed, the Alliance had beefed up its military presence in Eastern Europe and adopted a variety of measures to incorporate Ukraine in its planning and procedures. In brief, if the West was a threat to Russia in 2014, it was an even greater threat to Russia in late 2015. And yet, Russia—that is, Putin—mandated a ceasefire.

According to the logic proposed by Putin as well as Russian and Western realists, Russia and the separatists should have continued, and perhaps even intensified, the fighting in eastern Ukraine in the last few months. Instead, Putin has deescalated, despite the fact that all the alleged reasons for the war were still in place.

Realists might reply to this critique by suggesting that the real reason for the ceasefire in Ukraine is perfectly obvious: Putin had decided to go to war in Syria, and Ukraine was thereby relegated to the strategic backburner.

One could explain Russian behavior as either an example of irrationality or a case of changed perceptions. But if Putin acted irrationally, then realism’s rationality assumption becomes false and the theory’s relevance to the Russo-Ukrainian war disappears. Alternatively, if Putin perceived Syria to be a greater threat than Ukraine at Time B as opposed to Time A, then realism morphs into constructivism by implicitly adopting the latter’s claim that national interests are not objective or stable, but continually constructed and reconstructed by elites. That concept may or may not be true, but it is certainly not realism.

Whichever explanation of Russia’s wars one chooses, one must assign a central role to Putin, rather than to internal conditions in Ukraine or external threats from the West. At the core of the explanatory model may be Putin the man or Putin the psychopath. Or it may be Putin the machismo-obsessed leader of a highly centralized, institutionally weak, authoritarian system that requires militarist chest beating and imperialist sabre rattling for its, and his, legitimacy.

What is clear is that Putin started the war and only Putin can end it. Russia and its supposedly objective national interests, like Ukraine and its alleged capture by fascists, are pretty much irrelevant. Western policymakers would do well to keep the centrality of Putin in mind as they attempt to construct a lasting peace in Ukraine. It’s not Russia, Ukraine, or the West that has to change for peace to be possible. It’s Putin.

Alexander Motyl is a Professor of Political Science at Rutgers University-Newark.