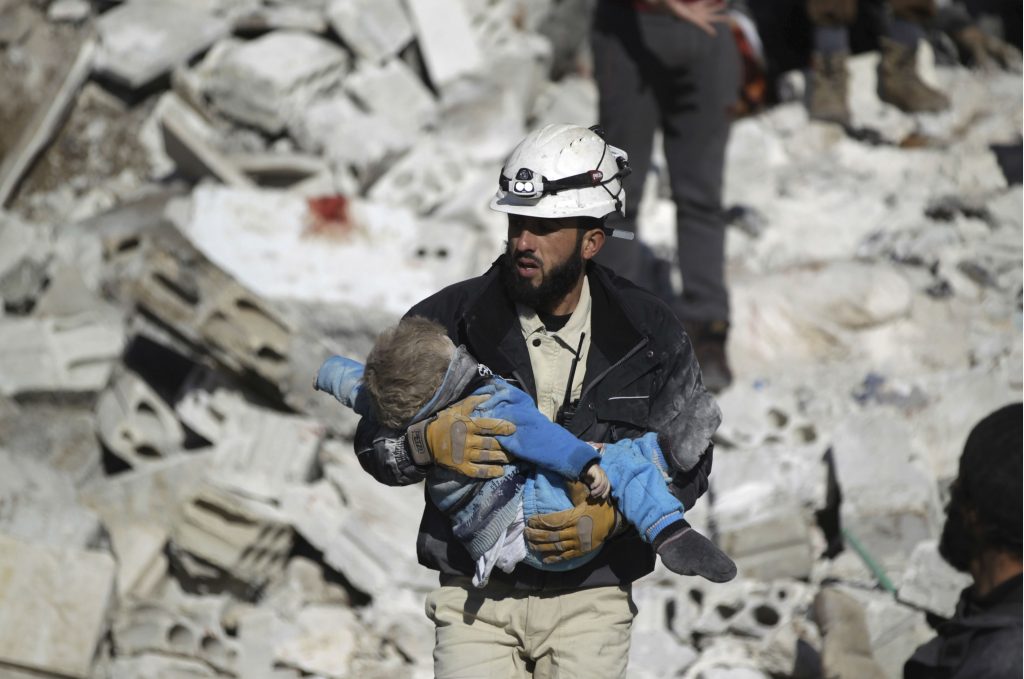 This month will mark one year since the beginning of Russia’s intervention in Syria and two and a half years since its invasion of Ukraine’s Donbas region. In Syria, Russia has indiscriminately bombed inhabited areas using virtually every type of conventional munition in its arsenal—thermobaric, cluster, and incendiary—killing around 3,000 civilians so far. These deaths are no accident, but a necessary part of Russia’s strategy to subdue the areas rebelling against the dictatorship of its allies, the Assad family, who themselves have employed nerve gas, mass starvation, and systematic torture. In eastern Ukraine, almost ten thousand people have been killed, half of them civilians and Ukrainian servicemen, in a conflict whose duration and intensity are entirely at the discretion of the Russian Federation. Without Russia’s arms, soldiers, and money, the war would end tomorrow.

But while hundreds of thousands of people took to the streets in major cities across Western Europe and the United States to protest the American invasion of Iraq and, more recently, the invasion by America’s ally Israel of the Gaza Strip in 2014, Russia’s wars of choice in Syria and Ukraine have failed to excite a single public demonstration of any significance anywhere in the Western world. While America’s mistaken destruction of an Afghan hospital in 2015 drew massive condemnation, Russia’s “pattern” of “deliberate attacks on Syrian…medical infrastructure” has been met with silence by the Western public. Not even the Kremlin’s role in exacerbating the refugee flows that have led to the worst internal crisis in the European Union’s history can seem to rouse any sustained popular criticism. This is not insignificant: for better or worse, it is popular pressure in the West that has the greatest potential to bring about decisive political action.

The modern humanitarian conscience is often cited as one of the West’s proudest achievements, but its indifference to Russia’s crimes reveals an underlying ideology that is essentially an artifact of the Cold War. Born in a period in which the fate of the world was being determined by the bipolar contest of the United States and the Soviet Union, the humanitarian critique is configured to accommodate two easily recognizable characters and a straightforward narrative. Its tolerance for ambiguity is correspondingly low. As such, Ukraine’s fragile, corruption-plagued democracy and the bewildering array of Syrian rebels are not the uncomplicated “good guys” the Western imagination demands.

Ironically, Russia has in many ways benefited from the loss of its superpower status and the accompanying scrutiny. While American militarism is consistently denounced, Russia has quietly maintained the world’s largest nuclear arsenal and rebuilt an army capable of conquering much of Europe. Freed from the necessity of matching America in word and deed on the international stage, it projects its military strength unabashedly, intimidating neighbors from the Baltic to the Sea of Japan. And it continues to reap a dividend from its glorious past as America’s Cold War opponent; for millions of people in the West who regard American hegemony as a threat to world peace, a view shared by figures as diverse as German Foreign Minister Frank-Walter Steinmeier and Internet gadfly Julian Assange, Russia remains a necessary and even admirable counterweight.

Additionally, Westerners cannot criticize what they don’t know. The fall of the Iron Curtain has not led to any concomitant increase in popular understanding of Russia but the opposite. While it can be argued that Western knowledge of Russia and Eastern Europe even during the Cold War was embarrassingly shallow and rarely extended beyond stereotypes, the decline in Russia’s profile has only reinforced the illusion of American omnipotence. References to America permeate foreign news, advertising, and popular culture around the globe, casting a cognitive shadow in which Russia can safely and stealthily wage its hybrid wars.

By contrast, with the collapse of the USSR, the United States has been left as not only the world’s sole superpower, but also, in the eyes of many, solely responsible for the world’s ills. Westerners’ preoccupation with the misdeeds of America and its allies has led to a kind of reverse nationalism in which many in the West compete to see who can engage in the harshest self-criticism. The upshot is that the Western humanitarian sensibility, for all its global pretenses, remains fundamentally Euro-centric: it reacts primarily when other Westerners are at fault. One of the paradoxes of this popular humanitarian sensibility is that those countries which show the least regard for international norms often attract the least criticism, and in this regard, Russia is no exception.

The West does much that is worthy of censure, but the single-minded fixation on its guilt is a testament to the high standards it sets for itself, not its wickedness. Unfortunately for Ukraine and Syria, Vladimir Putin understands better than many Westerners that, in a democracy, the outrage expressed in diplomatic notes and official statements is no substitute for the grassroots sort that takes place on the streets and social media. Until the European and American public can move past the myth of a Western monopoly on violence, Putin’s wars will go on.

Andrew Kornbluth holds a PhD in history from the University of California, Berkeley.

Image: A civil defence member carries a dead child in a site hit by what activists said were airstrikes carried out by the Russian air force in the rebel-controlled area of Maaret al-Numan town in Idlib province, Syria January 9, 2016. At least 70 people died in what activists said where four vacuum bombs dropped by the Russian air force in the town of Maaret al-Numan; other air strikes where also carried out in the towns of Saraqib, Khan Sheikhoun and Maar Dabseh, in Idlib.