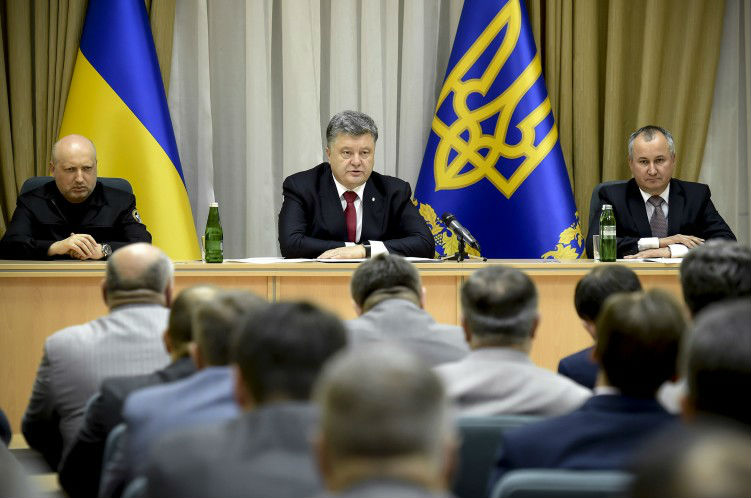 Ukrainian President Petro Poroshenko (center) named Vasyl Hrytsak (right) as acting head of the Security Service of Ukraine on June 18. Friends of Ukraine in the West are concerned that politics has taken a competent spymaster out of the fight at a critical time. Western concerns will diminish, however, as they come to work with the competent Hrytsak. (Credit: Presidential Administration of Ukraine)

Late June in Kyiv can be beautiful. With clear skies, temperatures peaking in the high 70s, the natural beauty of the city and its citizens, it can be easy to forget that the country is at war. In part that is a result of the country’s success. A year ago, few would have predicted that the country’s armed forces would fight the Kremlin and its separatist proxies to a standstill. Yes, Russian-backed separatists and Russian soldiers continue to press forward in the east, but their progress is measured in tens of meters and paid for in Russian and separatist blood. Despite a disinformation campaign that would make Joseph Goebbels, President Vladimir Putin’s favorite propagandist, red with envy, the Russian people still oppose the use of Russian soldiers in a war that Moscow started.

A few months ago, few would have predicted that Europe would renew its hard-hitting sectoral sanctions this week. None of this means that Ukraine is out of danger. On the economic side, most reformers are waiting to see if the government implements the legislation that Ukraine’s parliament passed in March at the insistence of the IMF as part of the process of securing a $17 billion loan. Ukrainian Finance Minister Natalie Jaresko is in a pitched battle with Franklin Templeton on the issue of restructuring Ukraine’s debt, with a moratorium on payments a likely result if the creditors continue to insist that they should be exempt from any penalty for lending to the corrupt government of former Ukrainian President Viktor Yanukovych.

The stiff fight in the east has not dissuaded Putin from his aggressive designs on Ukraine. Trying to open a new front in the war, Putin deployed his special services in Odesa and Bessarabian Ukraine to its west. The idea was to set off a major campaign of violence, sabotage, and protests designed to produce chaos and provide an opportunity for Moscow’s agents to declare twin People’s Republics of Odesa and Bessarabia. But here too Ukraine’s security forces—in this case the State Security Services (SBU)—rounded up the nest of plotters in May before they could put their plans into effect.

With Moscow’s military menace checked, if only for the moment, Kyiv has turned to its favorite extracurricular activity: internecine strife. The capital was roiled by President Petro Poroshenko’s decision to sack the competent and urbane head of the SBU, Valentyn Nalyvaichenko, on June 18. Insiders report that Nalyvaichenko’s offense was having political ambitions. He is associated with Mayor Vitali Klitschko in the Udar Party, which aligned with Poroshenko in the 2014 parliamentary elections. Udar may want to run independently in the local elections scheduled for October 25, a prospect that does not please the President’s team. In dismissing Nalyvaichenko, the President was asserting his right to choose his own man for a key position, a not unreasonable proposition.

In Kyiv, it is not just the President’s team that gets to play politics. Nalyvaichenko claims that he was dismissed because of the corruption charges he brought against the procurator general’s office, which the Ukrainian White House did not want to address. Whatever the truth of this charge, knowledgeable observers point out that there are many instances of corruption that Nalyvaichenko could have spotlighted, including some within his own jurisdiction. Critics also complain that the man named to replace Nalyvaichenko, Vasyl Hrytsak, does not have his predecessor’s talents and was chosen because of his close ties to the President. He served for a time as head of his security detail.

Friends of Ukraine in the West are concerned that politics has taken a competent spymaster out of the fight at a critical time. They have a point. Nalyvaichenko is well regarded abroad. Those concerns are heightened by the fact that Hrytsak is not well known in the West. A strong bureaucratic operator, Nalyvaichenko monopolized contact with key Western counterparts.

Western concerns will diminish, however, as they come to work with the competent Hrytsak. He is neither a politician nor an articulate English speaker. But he has played a critical role in the SBU’s successful operations in the east and south and by all accounts has done an excellent job as a deputy director of the organization. What he lacks in spit and polish, he makes up for in energy and grit. As in all countries, political maneuvers in Ukraine can at times lead to bad policy choices. In this case, that should not be the result.