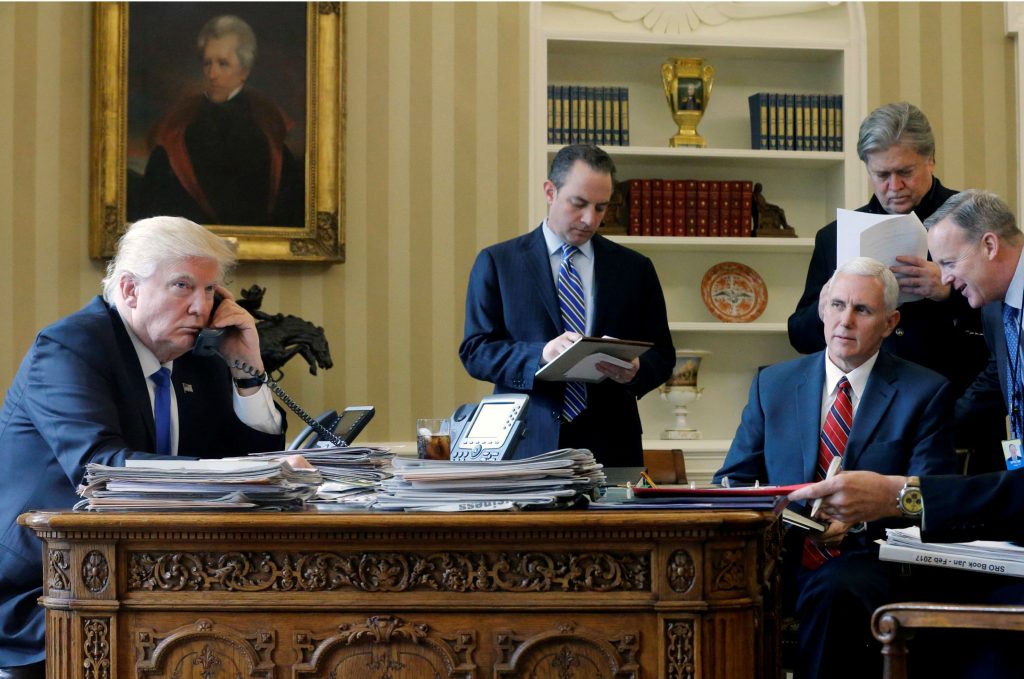 US President Donald Trump and Russian President Vladimir Putin’s telephone conversation on January 28 occurred amid widespread speculation that Trump would lift sanctions on Russia. While no such announcements were even hinted at, the contours of the emerging US-Russia dialogue will have momentous consequences for European security and for Ukraine.

The official White House readout of the conversation was minimalist, focusing primarily on the defeat of ISIS and emphasizing “a positive start to improving the [bilateral] relationship.” While the two leaders appear not to have discussed the lifting of sanctions against Russia, the readout’s general optimism and Trump’s numerous favorable comments about Putin have revived fears of an agreement on “spheres of influence” in eastern and central Europe between the two leaders. This, in turn, has created anxiety in a region where Russia has behaved in an increasingly belligerent manner. Indeed, the day after the Trump-Putin conversation, Russian-backed forces started a brutal offensive against the industrial city of Avdiivka, which has led to twenty deaths already.

For all the discussion about renewed US-Russia cooperation, Trump would be wise to reject the temptation to reach a “big power” agreement with Putin over the heads of Europe, Russia’s immediate neighbors, and Ukraine, in particular. Indeed, a lasting basis of cooperation with Russia will be impossible without an intelligent approach to enhancing the security and sovereignty of Ukraine and responding to the fears of a region which stands at the pivot of Putin’s geopolitical ambitions.

While Trump’s nominee for secretary of state and his defense secretary both appear to understand this, as do most Republican Congressional leaders, Putin is likely to tempt Trump with the argument that Washington and Moscow should reach an agreement on a broad range of issues, including a settlement on Ukraine. If one is to judge by Russian propaganda, Putin will try to convince Trump that Ukraine’s leaders are feckless and unreliable and that the Ukrainian state is dysfunctional and on the verge of collapse.

Yet this image is largely a construct of Russia’s information warfare. While Russia’s intervention in Ukraine has been economically disruptive, having led to 10,000 deaths, some two million displaced persons, and billions of dollars in damage to the country’s infrastructure, it has not transformed Ukraine into a failed state—far from it.

Over the last two years, President Petro Poroshenko and Ukraine’s government have skillfully renegotiated their foreign debt, adopted a new corruption-free system of public bidding on government contracts, passed a responsible budget in line with IMF requirements, eliminated most corruption in the gas trade—while ending dependence on Russian energy, enacting one of the world’s most rigorous income and asset declaration systems for government officials, establishing a new assertive anti-corruption bureau, and implementing serious deregulation.

As a result, Ukraine’s economy has begun turning around and is projected to grow between 2.5 and 3 percent this year.

Moreover, instead of creating rifts among Ukrainian- and Russian-speakers, Putin’s aggression has galvanized and unified Ukraine’s population, diminishing differences between the Ukrainian-speaking west and the Russian-speaking east. As a result, Ukraine today is enjoying a rebirth of patriotism and a fierce public commitment to fight for the defense of the homeland.

This fighting spirit has been matched by dramatic reforms and improvements in the military. Ukraine now has one of Europe’s most combat tested and combat-ready militaries. The country has devoted 5 percent of its GDP to national security and intelligently invested its resources in modernizing its Soviet era tanks, materiel, and artillery, as well as launching to production new tanks, armored personnel carriers, and other weapons. On December 1, Ukraine successfully tested sixteen new S-300 guided, medium distance surface to air missiles, an essential deterrent to Russia’s air power.

All these factors are more than a counterargument to Putin’s propaganda; they are a reminder to Trump and European leaders that Ukraine will reject any new sphere of Russian influence on its territory. Nor, after thousands of dead, will it accept Russia’s annexation of Crimea or any reintegration of the occupied Donbas that allows Russia a veto over Ukraine’s geopolitical and geo-economic choices.

If Trump seeks to nudge Putin toward cooperation in the war on terror, he will need to rein in Russia’s neo-imperial, hegemonic ambitions. A militarily strong Ukraine can act as a check to these ambitions, reduce Putin’s temptation to bullying, and, therefore, increase the chances that Russia and the United States can improve relations. A Ukraine left on its own, however, can become a well-armed but increasingly unpredictable factor in the politics of Europe. This would be the case if Ukrainians came to feel that they have been betrayed in a big power deal between Russia and the United States and spurned by the EU.

Poroshenko, Ukraine’s political elite, and its public are today strongly pro-American and pro-European. If Trump is to bargain with Putin from a position of strength and forge a new pragmatic relationship with Russia, he will be well served by a strong Ukraine that is capable of deterring further Russia aggression. Should he ignore Ukraine’s security interests in the rush to cut a deal with Putin, Trump will be opening the door to an unstable relationship with an aggressive Russia that will undermine his desire to turn the Kremlin into an ally in the global war on terror.

Adrian Karatnycky is a Senior Fellow at the Atlantic Council and co-director of its Ukraine in Europe Initiative.