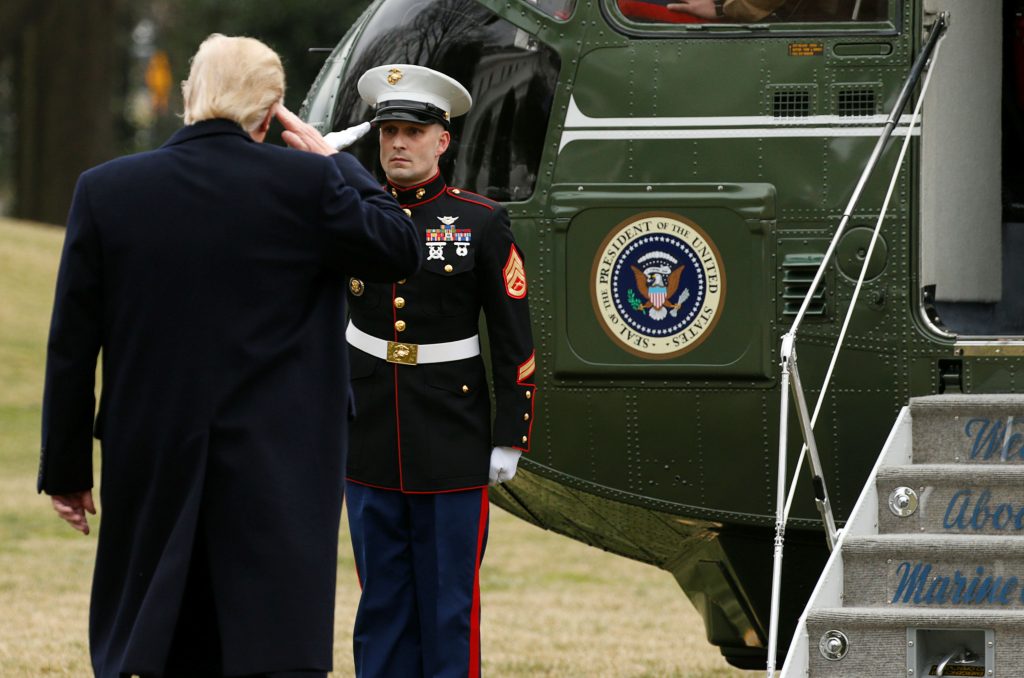 US President Donald Trump returns a salute as he boards Marine One upon his departure from the White House in Washington, U.S. February 3, 2017. REUTERS/Kevin Lamarque

By contrast, on January 31 the State Department issued a tepid statement condemning a murderous military assault on a Ukrainian town in the east without condemning its Russian perpetrators.

This stunned and demoralized Ukrainians and Russia-watchers.

But then, on February 2, an unequivocal condemnation of Russia was mounted in the United Nations by Nikki Haley, in her maiden speech as America’s UN envoy. “The United States stands with the people of Ukraine who have suffered for nearly three years under Russian occupation and military interventions,” she said. “Until Russia and the separatists it supports respect Ukraine’s sovereignty and territorial integrity, this crisis will continue.”

Further, she added bluntly: “Crimea is part of Ukraine. Our Crimea-related sanctions will remain in place until Russia returns control over the peninsula to Ukraine.”

Haley wasn’t speaking for herself. A National Security Council spokesperson confirmed that Haley and Flynn had discussed her statement at the UN before it was given and that Flynn “agreed with” its contents. The spokesman told BuzzFeed that it was fair to call Haley’s statement “administration policy.”

Obviously, as Trump gets his feet under his desk and expands his circle of advisers beyond the salons of Manhattan and Mar-a-Lago to hardline military experts, his administration is moving toward doing the right thing when it comes to Putin and his invasion of Ukraine.

And the right thing is to put Russia “officially on notice” to end its war against Ukraine, withdraw back inside its borders, and pay tens of billions in damages.

So far, Trump has kept his cards close to his vest—and talked about resetting the Russian relationship—but it’s dramatically more likely that Putin is going to discover that there is a “Bear” in the White House, and that poking him in the eye is going to backfire badly.

Haley’s tough talk was backed up by a White House spokesman who said sanctions “are going to stay in place until they withdraw [from Crimea].”

Some investors speculate that Haley’s wording does not preclude dropping sanctions against Russian banks and energy companies which were imposed for reasons other than the invasion of Crimea. But that’s unclarified and debatable.

However, what is not debatable is that Trump has an enormous anti-Putin wind behind his back to be more forceful, punishing, and decisive than former President Barack Obama was concerning Ukraine’s crisis. For starters, a recent poll showed that 67 percent of Americans have an “unfavorable view” of Putin and 60 percent of Russia.

There is also great pressure in Congress led by Senator John McCain who wrote in a letter to Trump that the timing of the increased fighting after the two spoke by phone “is an indication that Vladimir Putin is moving quickly to test you as commander in chief.”

McCain supports tougher sanctions and supplying lethal defensive weaponry to Ukraine’s military. There are 700 Russian tanks inside Ukraine, more than the French and Italian militaries have combined. Ukraine has had to race to build its forces after it was stripped of its best equipment by its Russian-controlled president who was deposed in 2014 and now has Europe’s second largest, with 400,000.

This latest outbreak is of strategic importance and illustrates Moscow’s real goals. Avdiivka, the village under assault, is located 20 kilometers further into Ukrainian territory and provides power to an entire region. Russia aims to cripple another chunk of the country to create chaos and facilitate further invasion.

This war is a creeping invasion—not a separatist movement—and is relentless. Since 2014, Russia has destroyed Ukraine’s industrial base, killed 10,000, and dislocated 1.4 million.

Even worse, this latest offensive threatens to cause an environmental catastrophe as hundreds of Russian missiles every day rain devastation on industrial plants where waste chemicals, sulphuric acid, and formaldehyde storage may be breached and leak into surrounding lands and rivers.

For those who have watched this tragedy unfold in Ukraine, Putin continues to demonstrate that he is, without doubt, a greater threat to the world than ISIS or China or Iran. He has meddled militarily and financially in his neighborhood, and around the world, and is destabilizing Eastern Europe, the Middle East, and democracies everywhere.

Under Obama, he marauded with impunity while blaming others.

“We frequently hear from the Russian government that all the problems in eastern Ukraine are the consequence of actions by the Ukrainian government. This is simply not the case. It is an inversion of reality,” said Matthew Rycroft, the UK Ambassador to the UN.

For these and many more reasons, Putin is heading for his comeuppance soon. That’s because the toughest guy in a long, long time has become president of the United States.