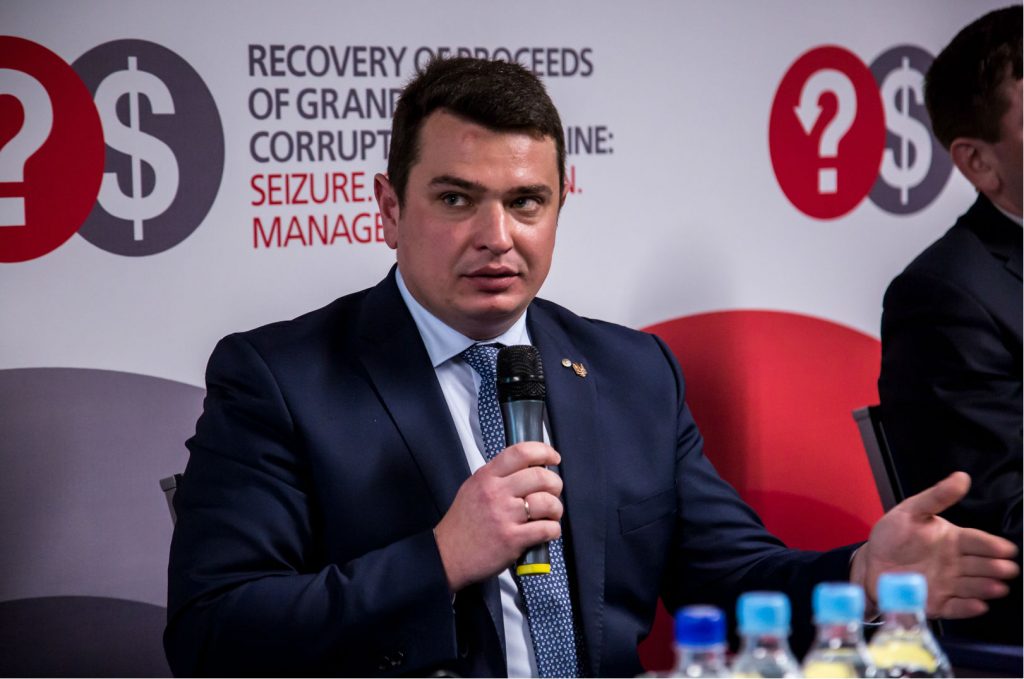 Artem Sytnyk, director of the National Anti-Corruption Bureau of Ukraine, speaks at a conference on asset recovery in December 2016. Credit: NABU.

Since the Euromaidan, Ukraine has achieved some notable anticorruption successes. The National Anti-Corruption Bureau (NABU), established in 2015 to target high level crimes committed by Ukraine’s corrupt political class, has demonstrated a high level of independence and has not hesitated to target the senior officials, judges, and state enterprise managers who previously possessed de facto immunity from prosecution.

The country’s existing judicial system is riddled with graft, largely because its judges remain committed to protecting corrupt colleagues. Activists single out the judicial bodies responsible for selecting or reappointing judges as the problem. The High Qualification Commission recently approved the reappointment of eight judges, despite NABU’s conclusion that they were likely engaged in corruption and/or had filed false asset declarations. Meanwhile, the High Council of Justice—Ukraine’s other judicial selection body—refused to remove one of its own members suspected by the Prosecutor’s General Office of receiving bribes for influencing judicial decisions.

Ideally, judicial reform would go hand-in-hand with the creation of anticorruption institutions such as NABU. For now though, judicial reform is stalled, and activists believe it could take up to five years to cleanse graft from the existing court system. Ukraine’s lack of judicial reform risks rendering NABU toothless. A recent report from the Anti-Corruption Action Center (AntAC) and Reanimation Package of Reforms (RPR) noted that judges have blocked NABU’s investigations by denying search warrants, setting purposely small bail for suspects, thereby allowing them to flee the country, and preserving official positions for people who are NABU suspects.

The effect of this judicial obstruction is clear: NABU has filed fifty cases, but these have resulted in one conviction and twelve plea bargains, while the remaining cases are stuck in the court system; most show no sign of movement.

Luckily for Ukrainians, reform-minded parliamentarians have drafted bill 6011 to create anticorruption courts. The success or failure of an anticorruption court system will ultimately be determined by the independence and selection of the judges who serve on it.

To ensure anticorruption courts are staffed by clean and independent judges, AntAC supports the creation of a special selection panel composed of nine members. The president and parliament would appoint three members each to the panel, while Western embassies in Kyiv would nominate the final three members. Most important, seven out of the nine panelists must sign off on the appointment of each jurist, thus giving the three international members of panel the ability to block the appointment of unqualified judges.

While civil society activists hope to see 6011 passed this spring, they remain concerned that Ukraine’s political elites, including the president, will never allow the creation of truly independent anticorruption courts.

“Poroshenko does not support the creation of an anticorruption court. He also gives the message that only he can submit a draft law on this subject, but this is something he does not do,” said AnTAC attorney Anastasia Krasnosilska. “As a result, neither the parliament’s judicial committee nor Speaker Andriy Parubiy have put 6011 on the agenda, and now we are stalled,” she said.

Existing anticorruption institutions such as NABU were established as a result of pressure from the International Monetary Fund, EU, and United States. AnTAC has urged Ukraine’s partners to support civil society’s demand for establishing an anticorruption court with transparent selection procedures for judges. “The only way to push the president to support the creation of an independent anticorruption court is to make this a very firm condition of any further diplomatic and/or financial assistance to Ukraine,” Krasnosilska said.

It’s time for the West to heed the cries from Ukraine’s beleaguered civil society reformers.