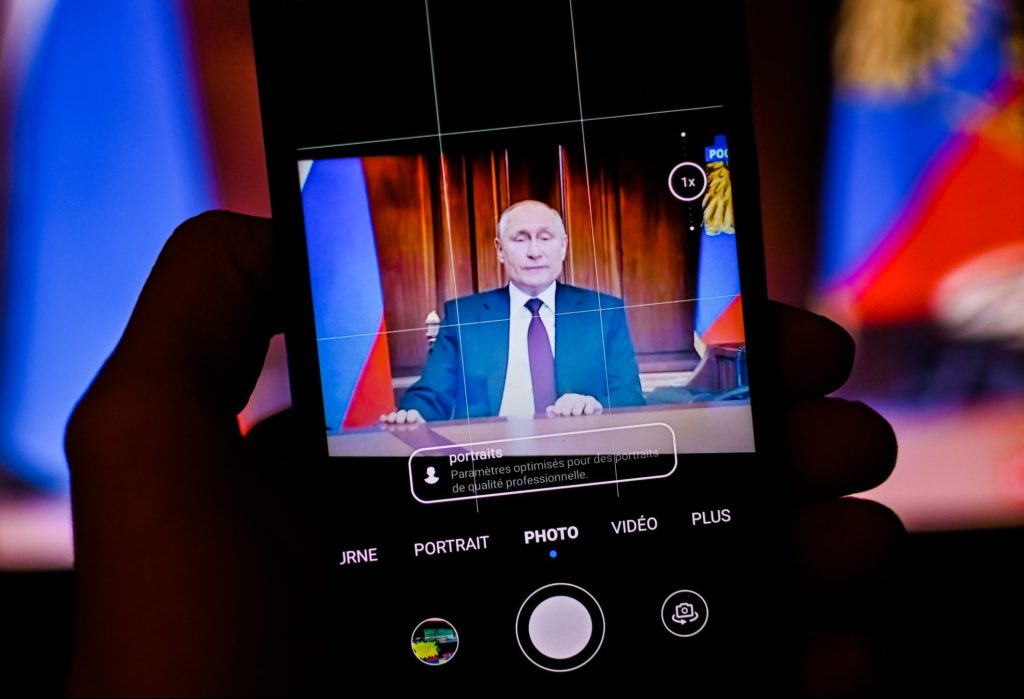 Vladimir Putin has long enjoyed a reputation as a master of information warfare. Over the past decade, his weaponization of social media and aggressive promotion of fake narratives have proven pivotal in a range of landmark achievements such as the 2014 seizure of Crimea and the 2016 election of Donald Trump.

This makes the current state of affairs all the more surprising. With Putin’s Ukraine invasion still less than two weeks old, it is already clear that the information war has been decisively lost.

Since Putin’s attack began on February 24, the world has rallied overwhelmingly in support of Ukraine. The vast majority of the international community have also vocally condemned Russian aggression. Indeed, the war is being widely touted as the most black-and-white issue of good versus evil in modern history.

Putin’s invasion has clearly made Russia toxic in ways that even his formidable disinformation machine has been unable to counter. It has led to unprecedented international sanctions and persuaded many of the world’s biggest companies to cut all ties with the country. Even formerly reliable partners like China appear increasingly unwilling to stand publicly with the Kremlin.

Meanwhile, false Russian narratives are no longer being given equal space in the international media or allowed to pass unchallenged. Putin’s attempts to justify his invasion have notably failed to gain significant traction. Instead, his increasingly unhinged rants about Ukrainian “neo-Nazis” and “drug addicts” have been widely ridiculed or simply dismissed.

Faced with the reality of a catastrophic defeat on the information front, Putin has retreated and is now embarking on a desperate scramble to protect his grip on domestic Russian audiences. During the first ten days of the war, Moscow has banned Facebook and Twitter, shut down most of the country’s remaining independent media outlets, and introduced draconian new laws promising long prison sentences for anyone who dares to question the Kremlin’s Orwellian party line regarding the war in Ukraine.

After years of success, why is Putin now losing the information war so comprehensively?

One of the key differences between the current war and the Russian invasion of 2014 is the presence of large numbers of international correspondents in Ukraine. Thanks largely to the Biden Administration’s policy of steadily releasing details of Putin’s invasion plans, the watching world knew well in advance that a major conflict may be about to break out. As a consequence, representatives of the international media began gathering in Ukraine in late 2021.

By early February, many of Kyiv’s top hotels were full of journalists and camera crews from all over the world. This influx has also seen reporters heading out to regional capitals like Kharkiv, Lviv, Mariupol and Odesa in large numbers.

The unprecedented international media presence in Ukraine has enabled hundreds of journalists to encounter the reality of the country for themselves. In contrast, previous Ukrainian news stories were typically covered by Moscow bureaus, with only a handful of stringers actually residing in Kyiv. This led to a Moscow-centric view of Ukrainian affairs, with bureau chiefs often giving far too much weight to Kremlin narratives while favoring the condescending conclusions of their Russian colleagues.

In contrast, the Western journalists who flocked to Ukraine in the months leading up to the outbreak of hostilities were largely free of Russian biases and soon began to redefine international coverage of the country. Crucially, they were not in any way beholden to the Kremlin, unlike Moscow correspondents who must secure Russian state accreditation if they wish to keep their jobs.

The Kremlin enjoys keeping its foreign correspondents on a relatively short leash. Moscow-based international journalists tend to receive very limited direct access to senior officials and are often forced to rely on spoon-fed information. Any correspondent who tells inconvenient truths runs the risk of expulsion, as has happened to Luke Harding of The Guardian and the BBC’s Sarah Rainsford. Faced with the very real prospect of losing their livelihoods, many Moscow correspondents engage in self-censorship and quickly learn to avoid taboo subjects.

The media climate in Ukraine is strikingly different. While the Ukrainian media landscape remains dominated by oligarch interests and is prone to highly partisan reporting, it is light years away from the strict state censorship of the Kremlin-controlled Russian media. Instead, Ukraine’s many different media outlets compete with each other to create an imperfect but pluralistic media market.

Thanks to this remarkably free and robust information environment, international journalists in Ukraine have been able to engage with a wide range of local colleagues in order to form a well-rounded picture of the true situation in the country. This interaction has also helped to underline the common professional ethics and shared values that connect Ukrainians and their Western peers.

Dramatic recent improvements in international media coverage of Ukraine are only part of the reason behind Russia’s resounding information war defeat.

The most important single factor remains the fundamental weakness of Putin’s own narrative. His claim to be eradicating “Nazism” in a country with a Jewish president where far-right parties consistently poll in the low single digits is self-evidently absurd. To make matters worse, the war crimes committed by his troops in Ukraine have sickened the world.

While Putin has become a pariah, Ukrainian President Volodymyr Zelenskyy has emerged as a global hero. Zelenskyy’s sensible and straightforward daily briefings and his memorable selfie videos have been a revelation, while iconic quotes such as “I need ammunition, not a ride” have already entered history. In contrast to Putin’s obvious lies, Zelenskyy comes across as sincere and candid. He does not isolate himself or force colleagues and members of the media to sit at the opposite end of ten-meter-long tables.

If Zelenskyy is the undoubted star of Ukraine’s information war effort, other Ukrainian officials have also performed excellently. Foreign Minister Dmytro Kuleba has been a prominent and effective presence on social media, as has Minister for Digital Transformation Mykhailo Fedorov.

Ukraine’s military has stepped up to the challenge with regular updates and clear, coherent messaging. They have been supported by Ukraine’s vast and vibrant civil society, which has served as an informal infowar army posting credible updates on military engagements and Russian atrocities along with inventive memes and morale-boosting patriotic messages.

Putin may yet achieve temporary military dominance over Ukraine through the use of overwhelming force, but it is far from clear how he could hope to convert this into a sustainable political settlement. The infowar is already lost, while the savagery of the Russian assault has poisoned bilateral relations for decades to come.

As an iron curtain of repression falls on Putin’s Russia, international media organizations should already be looking ahead to the future post-war period. If Ukraine emerges from the current conflict unconquered, regional correspondent bureaus should abandon the suffocating atmosphere of Moscow and relocate to Kyiv, where the climate of media freedoms and an absence of political pressure will allow them to cover the wider region with far greater truth and accuracy.

Anders Åslund is a Senior Fellow at the Stockholm Free World Forum.