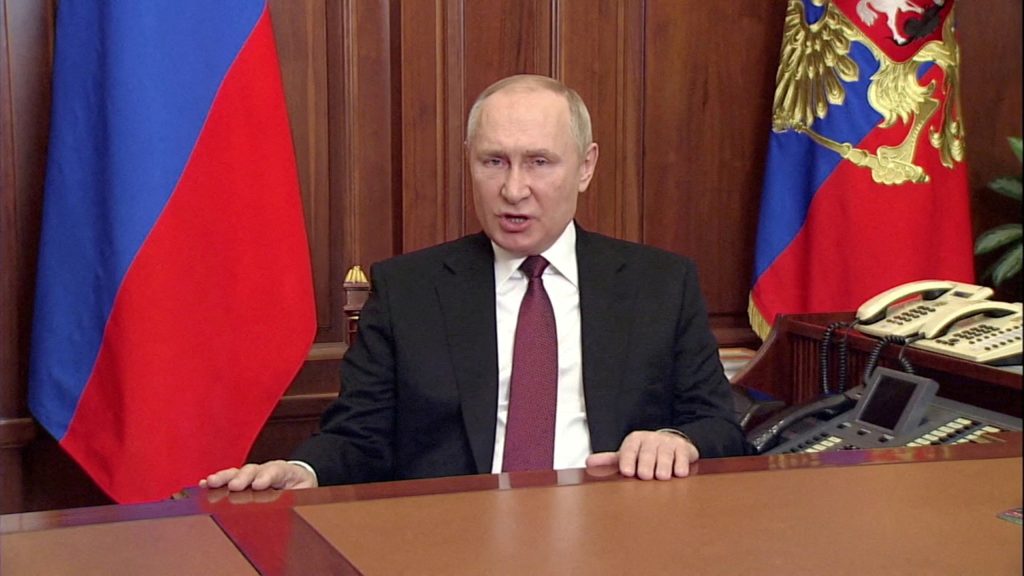 In his attempts to justify the invasion of Ukraine, Russian President Vladimir Putin has made numerous wild claims of a “genocide” committed by the Ukrainian authorities against the population of Russian-occupied eastern Ukraine. These baseless and unsubstantiated allegations are all the more cynical given the very real genocidal potential of the war Putin has now unleashed.

The tactics adopted by Russian troops in Ukraine are raising fears of a looming humanitarian catastrophe, with the increasingly indiscriminate bombing of civilian areas fueling a rising death toll and creating a wave of refugees fleeing the country for the neighboring EU. Given Putin’s past record as a destroyer of cities such as Grozny and Aleppo, these concerns are more than justified.

While unfolding events on the ground in Ukraine are already sparking international outrage and alarm, Putin’s twisted war aims and his long record of denying Ukraine’s right to exist paint an even darker picture of what may now lie ahead. Indeed, years of Kremlin propaganda have carefully set the stage for atrocities on a scale not witnessed in Europe since the days of Stalin and Hitler.

The roots of today’s war stretch all the way back to the start of Putin’s reign and reflect his unhealthy obsession with Ukraine. Putin has never made any attempt to conceal his contempt for Ukrainian independence, which he regards as an accident of history and the most painful of the many injustices brought about by the 1991 Soviet collapse.

The Russian ruler is fond of declaring that Ukrainians and Russians are “one people,” by which he means that Ukrainians are really Russians who do not deserve a state of their own. Instead, he argues, Ukraine’s entire centuries-long independence struggle is a foreign plot driven by scheming Western imperialists seeking to undermine Mother Russia. In summer 2021, Putin laid bare this conspiratorial vision of Ukrainian history in a rambling and frequently absurd essay that dismissed the entire notion of Ukrainian statehood.

Putin’s extreme animosity towards Ukraine is shaped by his imperialistic instincts. It is often suggested that Putin wishes to recreate the Soviet Union, but this is actually far from the case. In fact, he is a Russian imperialist who dreams of a revived Czarist Empire and blames the early Soviet authorities for handing over ancestral Russian lands to Ukraine and other Soviet republics.

In late 2021, Putin revealingly referred to the fall of the USSR as the demise of “historical Russia.” Likewise, his often cited but widely misunderstood 2005 quote describing the Soviet collapse as “the greatest geopolitical catastrophe of the twentieth century” was actually a lament for lost Russian greatness. “As for the Russian people, it became a genuine tragedy,” he explained. “Tens of millions of our fellow citizens and countrymen found themselves beyond the fringes of Russian territory.”

Putin’s burning resentment over the demise of the Soviet Empire and Russia’s reduced role in world affairs has helped fuel his fixation with Ukraine. The Russian ruler has been particularly enraged by Ukraine’s post-Soviet efforts to embrace democracy and pursue a path of Euro-Atlantic integration, which he regards as both a betrayal and a threat to his own authoritarian regime.

The 2004 Orange Revolution was a key turning point in Putin’s deteriorating relationship with Ukraine when his bungled intervention in the country’s presidential election backfired disastrously and helped spark a massive pro-democracy uprising which was widely cheered by the Western world. This personal humiliation left Putin increasingly bitter towards the West and determined to punish Ukraine. When Ukrainians once more took to the streets a decade later to defend the country’s fledgling democracy during the Euromaidan Revolution, Putin responded by seizing Crimea and invading eastern Ukraine.

Since 2014, Putin’s Ukraine obsession has increasingly defined Russian foreign policy. Long before last week’s invasion, his hybrid war in Ukraine had plunged Russia into an escalating confrontation with the West that many saw as a new Cold War.

This deteriorating geopolitical climate has been accompanied by a relentless stream of anti-Ukrainian propaganda in the Kremlin-controlled Russian media space. For the past eight years, Russian audiences have been spoon-fed a daily diet of disinformation designed to dehumanize and demonize Ukrainians as Nazi monsters and treacherous tools of Western imperialism.

Russia’s nightmarish propaganda has proven remarkably resistant to reality. Kremlin narratives about the horrors of Nazi Ukraine have remained unchanged despite the obvious unpopularity of Ukrainian far right political parties and their repeated failure to win more than 2% of the vote in national elections. Likewise, the landslide victory of Jewish Russian-speaker Volodymyr Zelenskyy in Ukraine’s 2019 presidential election was simply ignored.

In the lead-up to the current war, Putin’s propaganda has become even more menacing. In 2021, he began referring to Ukraine as an “Anti-Russia,” while routinely dismissing the country as a Western project rather than a sovereign nation.

The ground is now prepared for the destruction of Ukraine. Putin has succeeded in convincing a large portion of the Russian population that Ukraine is not a country at all and Ukrainians are really Russians. Any Ukrainians who disagree are either Nazis or Western agents. Needless to say, Russians are being actively encouraged to believe that neither category is deserving of any sympathy.

How will Russians react when confronted by the reality that they are not welcome in Ukraine? During the early stages of the conflict, there has been much bewilderment and numerous cases of retreat or surrender. However, as the Russian death toll mounts and the Kremlin propaganda machine adapts, we can expect to witness a hardening of Russian resolve with potentially terrible consequences for the Ukrainian civilian population.

Putin has declared that his goal is the “denazificiation” of Ukraine. This insane objective conceals his true aim of extinguishing Ukrainian statehood and eradicating all traces of a separate Ukrainian identity. He claims to be fighting against a small minority of extremists. Instead, it is now clear that Russia is at war with an entire nation of over 40 million.

In order to create the russified Ukraine he dreams of, Putin will need to pacify or remove the vast majority of the population. The Kremlin has already reportedly drawn up lists of Ukrainian politicians, journalists, and activists who will be subjected to arrest and possible execution if Russia succeeds in occupying Ukraine’s major cities. Given the scale and ferocity of popular opposition to the Russian invasion, any pacification campaign would need to rival the worst crimes against humanity of the totalitarian twentieth century.

Western leaders have reacted impressively to the shock of Putin’s invasion, but they may not yet have grasped the true gravity of the situation. The risk of genocide in Ukraine is now very real.

Putin has crossed almost every imaginable red line and turned his country overnight into an international pariah. There can be no way back for him now. Instead, he will pursue his criminal ambitions with an increasing recklessness that reflects his growing desperation. He will be aided and abetted by a nation that has largely swallowed his poisonous propaganda. As Voltaire famously warned, “Those who can make you believe absurdities can make you commit atrocities.”

A new crowdsourcing initiative aims to make the most of the Czech Republic’s extensive stocks of Soviet-era weapons in order to bolster Ukraine’s ability to defend itself against Vladimir Putin’s Russian invasion.