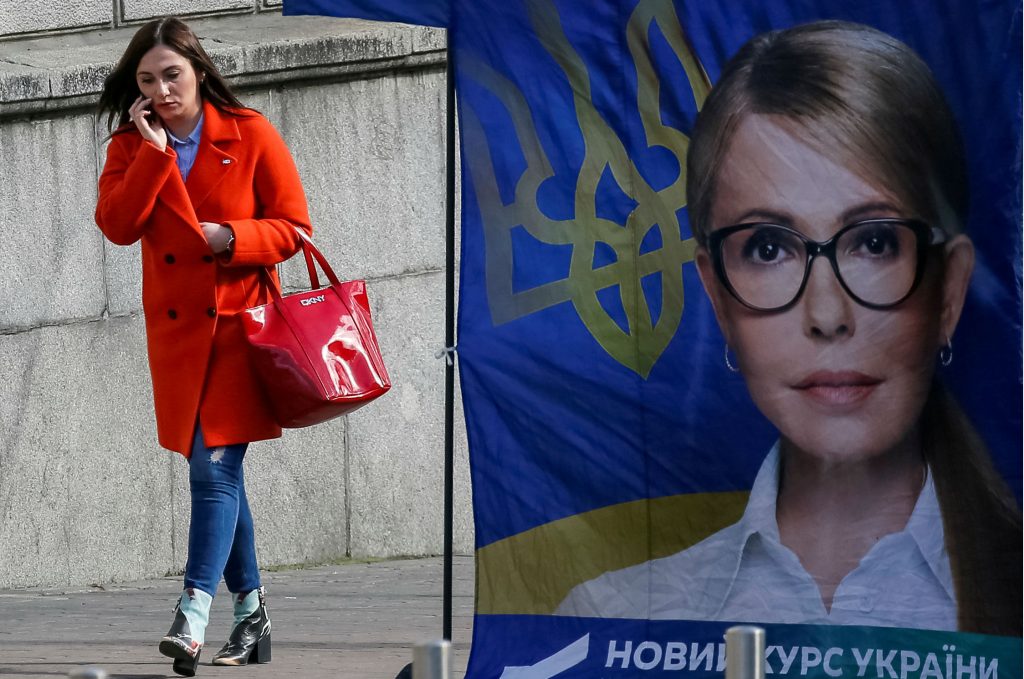 Ukraine’s presidential election is less than a week away, and no candidate will win outright with fifty percent. Comedian Volodymyr Zelenskiy leads in the polls and will certainly be in the run-off election on April 21. The big question is whether he will face incumbent President Petro Poroshenko or former Prime Minister Yulia Tymoshenko. Poroshenko leads Tymoshenko by less than 2 percent, so the race is tight.

Poroshenko is counting on several things to put him into the run-off.

One is the emergence of “technical candidates” meant to confuse voters. Two political nobodies—Yuri Tymoshenko, a volunteer soldier, and Yuliya Lytvynenko, a TV journalist—are meant to reduce Tymoshenko’s vote on election day. Of course, every Ukrainian citizen has the right to propose her or his candidacy in the elections, yet these two candidates are so marginal that they are not mentioned in most opinion polls, and do not have campaigns or political movements behind them. The appearance of these two names on the ballot is a plain attempt to mislead those who would like to elect Yulia Tymoshenko. A certain number of voters will mistakenly mark the wrong line, giving their vote to Yuri Tymoshenko or Yuliya Lytvynenko when they had intended to vote for Yulia Tymoshenko.

The successful registration of Yuri Tymoshenko and Yuliya Lytvynenko would not have been possible without the silent approval from the very state that currently benefits from large-scale Western support. Ukraine’s president, parliament, government, general procuracy, and electoral commission are permitting this and other trickery in the run-up to the presidential election, in spite of their loud adherence to “Western standards” and “European values,” as well as pompous claims for speedy accession to the EU and NATO. That this deceit is still being actively used in a country with a ratified and far-reaching association agreement with Brussels and a strategic partnership charter with Washington should give Kyiv’s Western partners reason for pause.

To be sure, the probability of the above scenario is low. Most likely, Poroshenko will either come in third, or he comes in second and the margin of his lead, compared to Yulia Tymoshenko’s result, will be enough to avoid fundamental doubts.

Technical candidates aren’t new to elections in Ukraine or the broader region. Subverting fair political competition by purposefully misleading voters through word games about the choices they are making on election day has been a staple of post-Soviet politics since 1991. Post-Soviet politics has a rich history of the creation of pseudo-parties associated with names and programs specifically chosen to confuse voters about the identities and ideologies of real competitors in elections.

Perhaps the most infamous such example is Vladimir Zhirinovskii’s ultra-nationalist “Liberal-Democratic Party” that the Soviet ancien regime invented in 1990 to discredit and obscure the real liberal-democratic movement emerging at that time. Since then, there have been hundreds of examples of elections, in the post-Soviet space, muddled by the appearance of so-called “technical” parties and candidates the names and programs which sounded similar to those of some genuine political force whose electoral support they were designed to dilute.

One would have hoped that Ukraine has overcome this pathology, at least on the national level, after almost thirty years of independence, and its three pro-democratic upheavals in 1990, 2004, and 2013-2014.

The fact that the incumbent’s “political technologists” use such cheap tricks in order to preserve his power is not encouraging. It is a stark illustration of the continuing rapaciousness, immorality, and pseudo-patriotism of the loudly pro-Ukrainian clan that currently dominates in Kyiv. While most Western observers hope for a continuation of Poroshenko’s presidency after April 2019, their expectations of his second term, in view of the dubious tools his team has been employing, should not be high.

Andreas Umland is senior non-resident fellow at the Center for European Security of the Institute of International Relations at Prague, principal researcher of the Institute for Euro-Atlantic Cooperation at Kyiv, and general editor of the ibidem­-Verlag book series “Soviet and Post-Soviet Politics and Society” distributed by Columbia University Press.

Image: A ballot paper for presidential election with the same surname and initials of two candidates, Yuriy Tymoshenko, Ukrainian lawmaker and Yulia Tymoshenko, leader of opposition Batkivshchyna party, is seen at a printing plant in Kyiv, Ukraine, March 21, 2019. REUTERS/Gleb Garanich