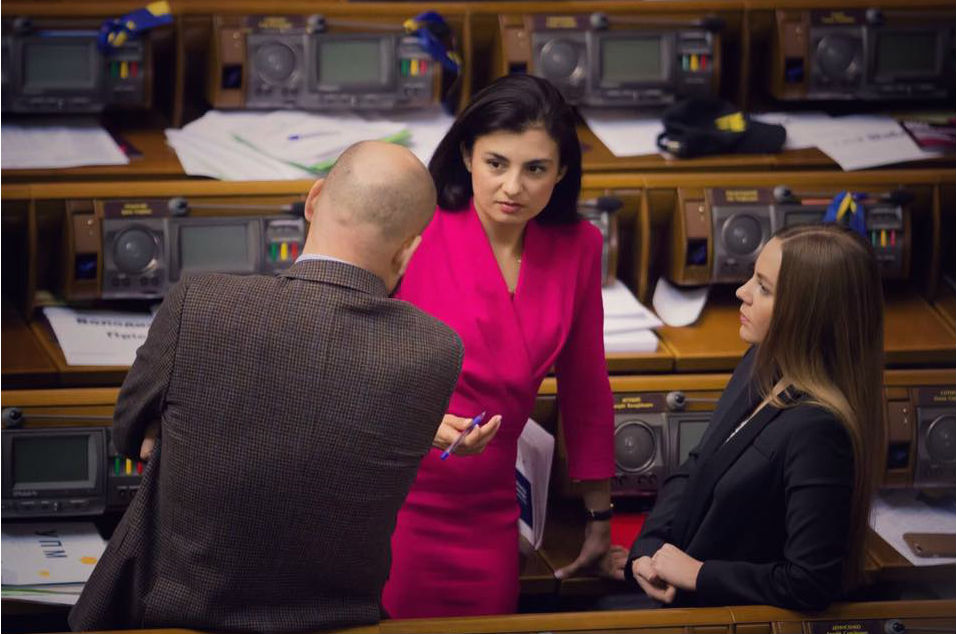 In fact, Mr. Bershidsky, it’s really not that hard. In 2017, we profiled the promising and idealistic Olena Sotnyk and Sergiy Gusovsky, a Ukrainian MP and a member of the Kyiv city council, respectively. And there are plenty more.

For example, meet Victoria Voytsitska, a parliamentarian who more than meets Bershidsky’s definition. Voytsitska, 43, who has raven hair and glasses, is warm but tough. She has to be: she has taken on Ukraine’s oligarchs and survived at least one attack on her life.

In 2016, Voytsitska blocked three attempts that would have allowed private companies to share gas licenses and earn big profits. The day after the third attempt, in the early hours of March 17, 2016, two thugs lobbed a Molotov cocktail at her home. Voytsitska, her husband, and their three-month old son David were asleep. Her dog barked and woke her up, and Voytsitska extinguished the fire; the police arrived ninety minutes later. The SBU investigated the attempted arson and the case has been moved to the Prosecutor General’s office. No charges have been filed.

She can’t prove that her work in parliament and the attempt on her life are related, but she strongly suspects that they are.

On June 14, 2016, the day that she arranged to have a hearing on the Rotterdam formula—a calculation that determines the price of electricity and directly benefits Ukraine’s wealthiest oligarch, Rinat Akhmetov—there was another incident.

Voytsitska’s husband was driving to work when another car purposefully rammed him. As soon as the driver, who was wearing a mask, hit her husband’s car, he jumped a fence and ran to a waiting car, fleeing the scene.

Voytsitska is undeterred. This winter, she has been busy fielding complaints from ordinary people who are being cheated. They’ve been charged for natural gas they didn’t use that was then cut off just as temperatures fell. In Bobrovitsya, a city in northern Ukraine, she intervened on behalf of a pensioner who was recovering from breast cancer; the woman had been charged 4,000 hryvnia for gas she didn’t use. Even after Voytsitska showed up at the local Opal Gas office in Bobrovitsya and demanded that the officials fix the woman’s bill, it still took three weeks and a hefty fee to restore the woman’s heat. Voytsitska says she paid the fee herself.

It wasn’t supposed to be this way. Ever since the country embraced gas reform and eliminated a major source of corruption, Ukrainians pay more; these higher prices were meant to open up the market to competition and give consumers greater choice. Instead, “there’s no benefit for consumers,” and “no more choice,” said Voytsitska. Part of the problem is gas oligarch Dmytro Firtash, who controls 75 percent of the household gas market.

Voytsitska sees herself as a long-term politician. She liberally uses the words “humility” and “service,” and says that Ukraine’s political class doesn’t understand the concepts. There are some exceptions, and she sees herself as one of them. “There are people who are sincerely working to build Ukraine for the next generation, but are truly doing it not for vanity.”

Voytsitska never aspired to be a politician, but during the Orange Revolution, while she and her husband were in Boston studying—she was at Brandeis and he was at Harvard—one of her mentors challenged her: “Why aren’t you going into government?”

She was in her thirties and didn’t think she had enough experience. But as the Revolution of Dignity unfolded, she knew she couldn’t sit out this time. “I realized, if not me then who? There is no one else but me and people like me to take responsibility for our country,” she said.

She read that Maidan activist Yegor Soboliev was forming a new team within Volia, a political party, and went to an informal meeting to learn more. After chatting with Soboliev, she began to work in Volia’s regional office and people began to take notice.

When Volia joined the Lviv-based Samopomich Party before the 2014 parliamentary elections, Voytsitska was all in. She was twenty-second on the party list, but the party was only polling at 1.5 percent (Ukraine has a 5 percent threshold for parties to enter parliament), so it seemed that there was no way Samopomich would even get a seat.

Unexpectedly, the party won 11 percent, which amounted to thirty-three seats, and Voytsitska was now a “stunned” parliamentarian.

“We were naïve for a long time,” she admits. The feeling was “finally we will break this vicious cycle.” In the first year-and-a-half after the Maidan, change felt hard but possible, she said.

Initially, she had high hopes for President Petro Poroshenko. In one of the informal meetings that Poroshenko liked to hold late at night, back when Samopomich was part of the governing coalition (it left in February 2016), Voytsitska pressed him to get rid of the oligarchs through privatization. She said that Poroshenko listened and told her, “OK, try to convince others.” She remembers that moment vividly. “That was the moment when I realized that in his inner soul, he remains a product of the old system.”

Voytsitska is a product of the new system. A mother of two who previously worked in the private sector, she insisted in June 2015 that parliament install a room for children while their mothers take up affairs of the state. Formerly, parliamentarians, their staff, and journalists who cover the Rada were out of luck. When a group of female parliamentarians approached then Speaker of Parliament Volodymyr Groisman—himself a father of three—on the topic, an old cafeteria was quickly repurposed.

At home, Voytsitska and her husband Hennadiy are strict parents: they put down their smart phones at the door and concentrate on their toddler son and teenage daughter.

Voytsitska feels lucky: her day doesn’t usually begin ridiculously early and she has time for her children. Still, she works hard; she says that an MP who takes the job seriously must spend twelve to fourteen hours reading legislation, attending meetings, and meeting constituents.

But it’s worth it, Voytsitska believes; she remains resolute that Ukraine needs new leaders and a positive agenda. She wants to prove that politicians can be different, and so far, she has.

Image: Victoria Voytsitska (center), a member of Ukraine’s parliament, has taken on Ukraine’s oligarchs and survived at least one attack on her life. Credit: Yan Dobronosov