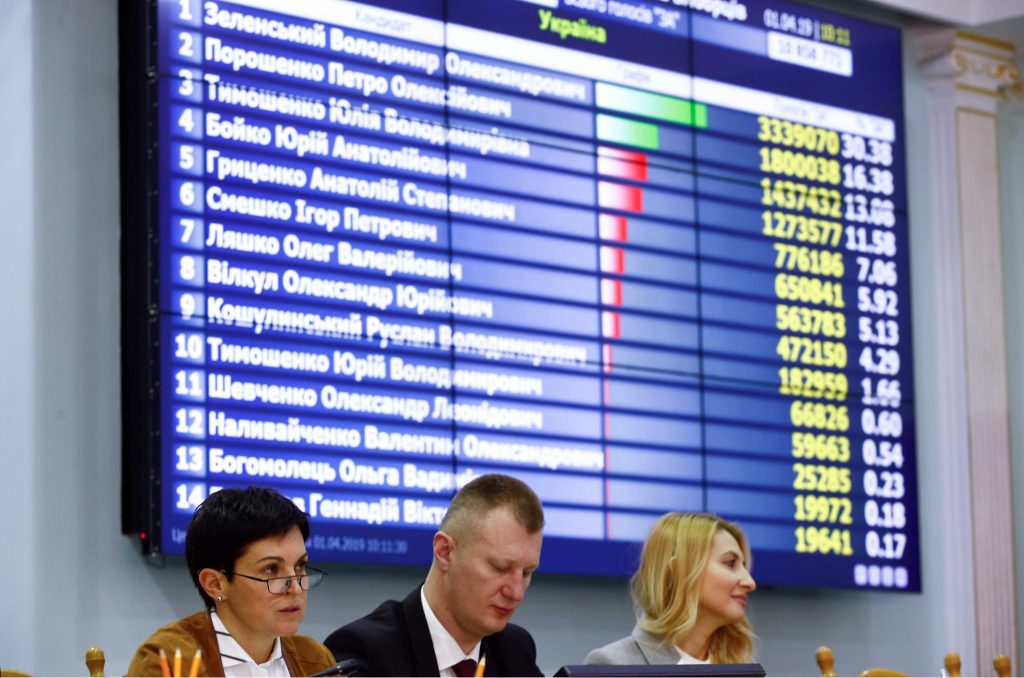 The results of the first round of Ukraine’s presidential election did not surprise many. The four exit polls were remarkably close to one another and to the last comprehensive polls. They all displayed a similar picture: Volodymyr Zelenskiy would face off in the run-off with Poroshenko, who beat Tymoshenko. With the votes now counted, Zelenskiy took 30 percent, Poroshenko 16, and Tymoshenko 13.

There were a few surprises.

Ihor Smeshko—head of the intelligence service under Leonid Kuchma—took 6 percent, which no one saw coming. The weak performance of the far-right was also unexpected. Ruslan Koshulynskyi, the joint candidate of the far-right, received 1.6 percent. In a country with an ongoing war in the east and severe economic hardship, his poor performance is vivid proof that the fringes of the political specter remain marginal, contrary to the Kremlin’s direct efforts to paint Ukraine as fascist state. The fact that Zelenskiy is of Jewish heritage also challenges Russian propaganda, which tried to smear Poroshenko and question the legitimacy of the election process.

Another surprise was just how much of the country Zelenskiy managed to capture. Poroshenko won Lviv and Ternopil oblasts in the west and the small diaspora vote. Remarkably, he failed to win Kyiv or even Vinnytsia, his home district. Even among the 33,000 front-line soldiers who voted, Poroshenko’s lead was less than two percent. He did poorly in the center and miserably in the south and east. Take Kharkiv, Dnipropetrovsk or Odesa oblasts as examples. In Dnipropetrovsk, Zelenskiy’s home oblast, Poroshenko got 8.2 of the votes, while Zelenskiy got 45 percent. In Kharkiv and Odesa, Poroshenko took 8.5 and 9 percent, while Zelenskiy received 36.4 and 41.6 percent. In total, Zelenskiy got nearly twice as many votes as the president.

The short explanation of Zelenskiy’s success is simple: the results reflect deep disappointment in the political class more than trust in the newcomer himself. Many voters simply wanted to punish Poroshenko. Two-thirds of the electorate distrust him, and the incumbent also regularly leads the anti-ratings in any polls. Fifty percent of voters stated that they would not vote for him under any circumstance.

With emotions running high, the fundamental question is whether the anger and disappointment with Poroshenko is stronger than the fear of having Zelenskiy, a weak or possibly incompetent commander-in-chief with no experience in policy whatsoever, in office.

As the results poured in, Zelenskiy addressed a crowd which included about 500 journalists and promised to announce the top five team members prior to the runoff. He appeared relaxed and gave short statements to some media. So far, despite having prime access to the 1+1 television station, which covers him and his campaign 24/7, the candidate refused most requests for exclusive interviews and has shied away from traditional political rallies. His strategy now will focus on avoiding mistakes and painting him as a credible alternative.

A possible crucial moment will be the TV debate, to which Zelenskiy expressed general interest on March 31, but since then his team walked back the idea. On April 3, Zelenskiy challenged Poroshenko to a debate and gave him twenty-four hours to decide. Poroshenko accepted. Televised debates in Western democracies usually make little difference. But given this extraordinary campaign where the candidates have never publicly debated, a debate could mark a turning point similar to the Kennedy-Nixon debate.

It’s too soon to write Poroshenko off, and the outcome of the second round is far from assured.

Poroshenko mastered a remarkable come-back after people started writing him off in December or early January. Despite outspending his rivals coupled with his immense administrative resources, Poroshenko will have to reinvent himself to appeal to those who refused to vote for him in the first round. Part of the adjustment could include dropping or deemphasizing issues such as faith or language. It seems those two pillars of his campaign have not paid off in the center, south or east.

However, the president seems to have already laid out his main strategy for the next three weeks: attack, attack, attack. Zelenskiy’s political inexperience as well as his Kolomoisky connection are the main focus of Poroshenko’s campaign. This approach may backfire. Journalist Ian Bateson asked whether disenfranchised voters will be convinced by one oligarch calling out another. Poroshenko has apparently hired Israeli political strategist Moshe Klughaft who is known for his aggressive style of campaigning. Klughaft helped Salome Zurabishvili win the Georgian presidency and previously advised an Israeli right-wing party. All of that points to a more aggressive campaign.

One of the biggest open questions is how voters who didn’t select Poroshenko or Zelenskiy will vote in round two. A little more than every fifth Ukrainian voted for Poroshenko. The pro-Russian electorate of Yuriy Boiko and Oleksandr Vilkul together got about 15 percent of the vote. Their voters are unlikely to be convinced by Poroshenko. Tymoshenko announced that she would not publicly endorse Zelenskiy, who had called her “a candidate of the past.” However, her electorate is unlikely to vote for her longtime nemesis Poroshenko. Former defense minister Anatoliy Hrytsenko, as well as Smeshko, refused to endorse either candidate. Even if Poroshenko can capture some of Hrytsenko’s or Smeshko’s voters, it is not enough.

Two other questions remain: Poroshenko needs about 35 percent more to win the secound round. Where will he get it, and will he be able to reinvent himself in less than three weeks?